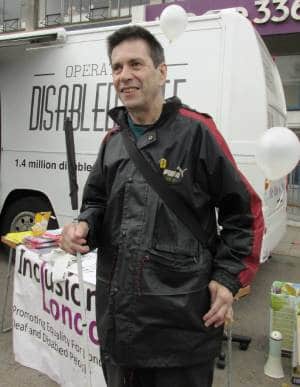 It is with the heaviest heart that we announce the death of our dear comrade Roger Lewis. Roger was an active revolutionary socialist throughout his adult life, joining the Socialist Workers Party (SWP) in 1988.

He touched so many lives and the tributes posted online after his death give testament to his life of activism. Everyone has their story of Roger and how he had inspired, helped, given solidarity or fought alongside them.

He inspired so many people and always with a wonderful turn of phrase, a razor sharp recall of history and knowledge of the socialist cause.

I first met Roger when he joined Lambeth South SWP in the late 1980s. A young activist, he worked in adult social care for Lambeth council and had been active in supporting the miners and print workers fighting against closures. As cuts came to the day care centres he worked in, he notably helped service users organise the blocking of Clapham High Street with their wheelchairs.

It was maybe a foreshadowing of his later work in Disabled People Against Cuts (Dpac). When the Tories unleashed deliberate and systematic attacks against disabled people, Roger played a leading role in anti-government resistance.

One of Roger’s proudest moments was appearing on prime-time news exiting the occupation of the Department of Work and Pensions headquarters to a cheering crowd in August 2012. As other anti-cuts groups came and went, Dpac endured, building unprecedented links between the trade unions and disabled people’s movements.

In a post this week, the National Union of British Sign Language Interpreters attributed its existence to Roger’s guidance and support.

Roger was serious in his commitment to fighting oppression in all its forms, whether raising awareness of the social model of disability or fighting fascists.

At the rise of the Nazi movement led by Tommy Robinson, I stood with Roger at an outnumbered counter-protest in central London. As the fascists charged, fists swinging, I was concerned for Roger’s safety. But he turned and told me to protect myself and of his own safety he said—“I stand here of my own volition, I chose to be here and I choose to fight”.

Roger was part of every fight for justice in south London, on every picket line and protest. His qualities of listening, debating, explaining and fighting were second to none. Roger was a trade union activist, an anti-racist campaigner, a disabled rights champion and above all a revolutionary socialist through and through. His death is heartbreaking.

He leaves behind his sister Jenny and brother Tim, his four nephews and niece and his long-term companion Carol. And the legions of us who were privileged to know him.