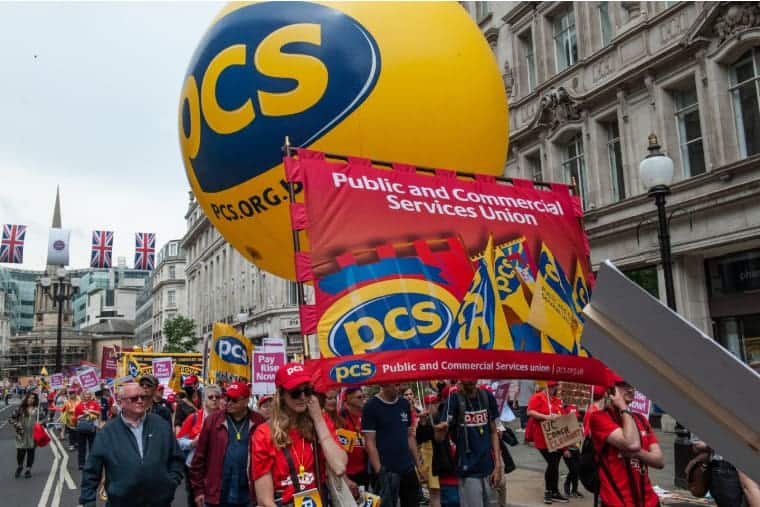 Groups of government workers were expected to announce plans for strikes after Socialist Worker went to press, entering the battle over pay.  It comes after some 100,000 civil service workers in the PCS union voted for strikes in a ballot that ended earlier in November.

They are fighting after government bosses offered them a pay increase of just 2 percent.  That’s a massive real-terms pay cut after more than a decade of similar cuts and pay freezes. Speaking last week, PCS general secretary Mark Serwotka said he expected notices for action to be issued from Monday of this week.

He said the action would involve workers in the Department for Environment, Food and Rural Affairs, the Department for Transport and the Home Office. The action would add to the momentum of the new wave of pay strikes.  But crucially—and wrongly— the plan misses the opportunity to bring all 100,000 workers who voted to strike out together. PCS union leaders argue that it will take more than one-day strikes to win, but worry that workers won’t be willing to lose much pay through striking.

In a video broadcast last week, Serwotka argued, “The history of our union tells us that calling one-day strikes do not in themselves put enough pressure on the government to force them to make concessions. He called for, “Sustained targeted action in areas that would have an immediate effect and build immediate pressure.” But such strikes—at most—have to be secondary to national action.

Serwotka added that the union’s leadership could call all workers out, but wanted to wait until January to see if it could coordinate with other unions. If everyone in all the unions that have voted for strikes came out together it would be a huge step forward in the pay fight for workers in every industry. But it’s a mistake to depend on it before calling large-scale and hard-hitting action in the civil service.

Many PCS reps are finding that union members are asking them when they’ll be on strike. Sarah, a PCS activist and national executive committee member, argues that all workers should be called out sooner.

“I’ve heard from quite a few people who said to me they voted to strike because they wanted to go out. One person said they were desperate to. The experience of other fights such as the Liverpool dockers is that escalating wins