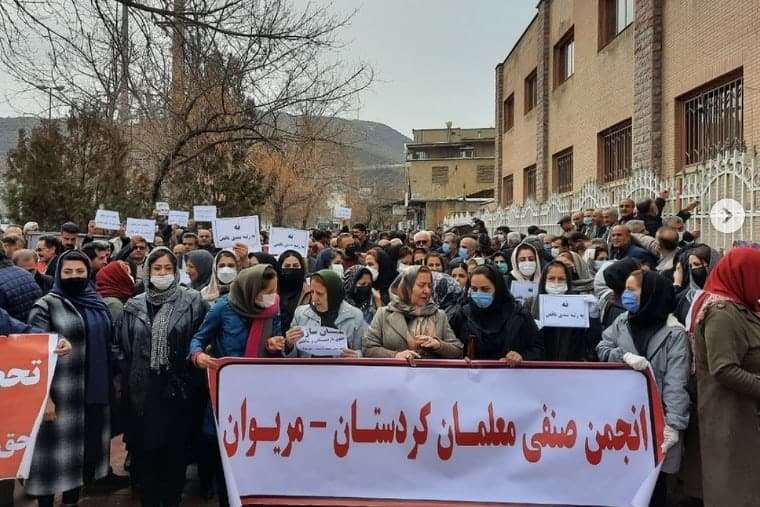 Tens of thousands of teachers in Iran on strike in December, last year (Picture: @ettehad.azad/Instagram)

More sections of ­workers have struck in Iran, as an anti‑government protest ­movement entered its third month. Workers at a major metal plant, a car factory, and truck drivers have all reportedly struck in the past week.

Some accounts say that truck ­drivers in several cities struck for at least three days—over fuel costs but also apparently in support of the protests. The Union of Truckers and Drivers Organisations is said to have called on all truckers to join the nationwide strike, and the regime has already offered to increase fuel subsidy payments.

The union also said that the strike is in support of the ­movement and against its repression by the government, especially in the provinces of Kurdistan, Sistan and Baluchistan. Workers at the Iran Tire Company in Tehran also reportedly struck in solidarity with protests, chanting, “We are all together” and “death to the dictator.”

Workers at a metal plant in the city of Isfahan struck and marched in their hundreds, demanding higher wages. They previously struck for three days, coinciding with mass ­protests against the regime. Workers at a Bafaq steel plant are also said to have struck over safety after an explosion.

And workers at a factory of the car maker Bahman Motor also struck against low pay. Though not yet widespread, it is significant that these strikes ­coincide with the protest movement against the regime, often seeming to coordinate with it.

There have also been strikes by construction workers at oil ­refineries, at petrochemical plants, at a ­sugarcane factory and by teachers. The latest strikes come a week after three days of mass protests across Iran marking the anniversary of a movement in 2019.

The three days of mass protests on its anniversary showed that the current movement, which began as a series of protests against laws forcing women to wear the ­headscarf, has broadened its aims. The regime recognises the potential threat that this could pose.

In a bid to undermine the ­movement, Iran’s supreme leader Ayatollah Ali Khamenei warned earlier in November that the country’s enemies—the US and Israel—would try to ­mobilise workers. The regime has also arrested and tortured union reps and activists, including teachers’ union activist Soran Eskander Lofti.

It also sentenced another teaching union activist, Jafar Ebrahimi, to five years in prison after arresting him on a May Day protest earlier this year. The arrests are part of the regime’s attempts to crush the movement, with thousands of arrests, hundreds of killings, and the threat of some executions.

Yet daily protests still continued into their 11th week, with reports that some protests set fire to government buildings. The protests appear to follow a pattern, with periods of smaller scale protests sustained by a core of activists, punctuated by much larger days of action on significant dates.

The movement has proved remarkably resilient. And if it extends its reach into much larger sections of workers, it could become an even bigger challenge to the regime.