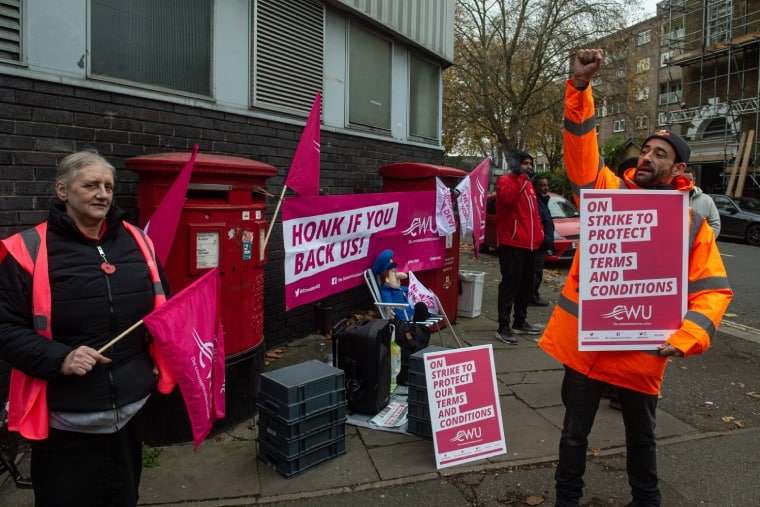 Standing strong on the picket line in London during the Royal Mail strike on Wednesday (Picture: Guy Smallman)

The strike comes at a pivotal moment in workers’ long-running battle to defend the future of their jobs and pay. Royal Mail chief executive Simon Thompson insisted earlier this week that his plan to slash 10,000 jobs and transform the service into a gig economy-style courier was his “best and final offer.”

And, he said, if CWU union leaders didn’t sign up to it, he would announce even more job cuts. And he would reduce his already meagre pay offer of just 7 percent over 18 months—already a huge real-terms pay cut.

“We’re very angry, very disappointed with the business and their intentions for this company,” Steve, a CWU rep in Balham, south London, told Socialist Worker. “They don’t want to hear us—they want to shut the door on us and get rid of us. But that’s not what this union is about. This feels like a pivotal moment. Some of us feel, and some of the members have said to us, that it’s either going to be them or us—and it won’t be us.”

Strikers in Tooting, south London, described how bosses have already begun trying to push through changes, while stepping up efforts to break the strike. “They’ve offered managers a bonus to drop the headcount and push through revisions,” one strike told Socialist Worker. “They also said that for every five days we’ve been on strike they’ll deduct a half day’s annual leave.”

Another striker described how bosses have already begun to push workers to prioritise parcel deliveries over letters. And they’ve brought in more agency workers rather than employ people on proper contracts. “We’re averaging 20 plus agency workers here every day,” he said. “The company say they haven’t got money, but that’s costing them a fortune.

“The prioritising of packets over letters is already going on in a lot of offices. They deny it but they’re telling people to take out packets and leave letters. They want to cut our jobs, they want to cut our pay. It’s terrible for people’s mental health. When you go into the workplace, the pressure they’re putting us under—the CEO doesn’t care.”

Thompson’s threats, in a letter to CWU general secretary Dave Ward, pull the rug out from under union leaders’ hopes that bosses would listen to their alternative business plan.

He said he and the company’s board wouldn’t accept “anything other than the transformational change”—that’s the job cuts and sweeping attacks on working conditions—that they’ve wanted desperately for years. It leaves workers with two options—escalate to break Simon Thompson and the board—or give in.

In response, union leaders have called a national demonstration during a strike on Friday of next week. They also want CWU members to deliver leaflets door to door to build support for the strike.

And they hope for more support from the Labour Party after its shadow business secretary Jonathan Reynolds wrote to the Tory government of his “concerns” about Royal Mail’s bosses. Postal workers have met the call for a demonstration in particular with widespread enthusiasm as an opportunity to bring them together.

But this can be no substitute for escalation. Thompson’s all-out assault on workers’ jobs must be met with an all-out strike. And Ward’s plan for a meeting with shareholders on Monday next week—including the private equity firm Vesa, which he warns plans a takeover—is a dead end. It means appealing to people far more interested in quick profits than workers’ jobs and livelihoods.

In the face of the assault, workers are still up for the fight. And, despite bosses’ claims of increased strike breaking, the strike is still solid and picket lines are still strong. “You can see the strength is still here,” said Steve. “We’ve still got a good amount of people coming out on the picket line. Resolve is still strong.”

“The motivation is to carry on,” a striker in Tooting said. “There’s no point going back. If we stop now they will crush us.”

Royal Mail bosses have coupled their threats of slash and burn with suspensions and victimisations of union activists—including some high profile reps. Even in offices and areas where there haven’t been suspensions, workers are feeling more wary of their managers.

“There haven’t been any suspensions in this office—yet,” one striker in Tooting said. “But there is intimidation and passive aggressive behaviour. They’re stepping up everything.”

It’s not the key way that bosses are trying to defeat the strikes, but it’s part of their strategy. The onslaught has reached such a scale—at least 59 CWU members have been suspended since strikes began—that union leaders were forced to address it in an online briefing to strikers on Tuesday.

Yet their response was to warn strikers to keep “cool heads” on the picket lines. This meant, rather than trying to stop scabs going in, “Keeping things legal—six on the picket lines, supporters in other areas not blocking the entrance.”

The result of holding this back is that bosses can declare war on activists and decrease the militancy of picket lines. Many activists will remember the walkouts that either reinstated a worker or got rid of a bullying boss. More of these can help turn the tide against Thompson.