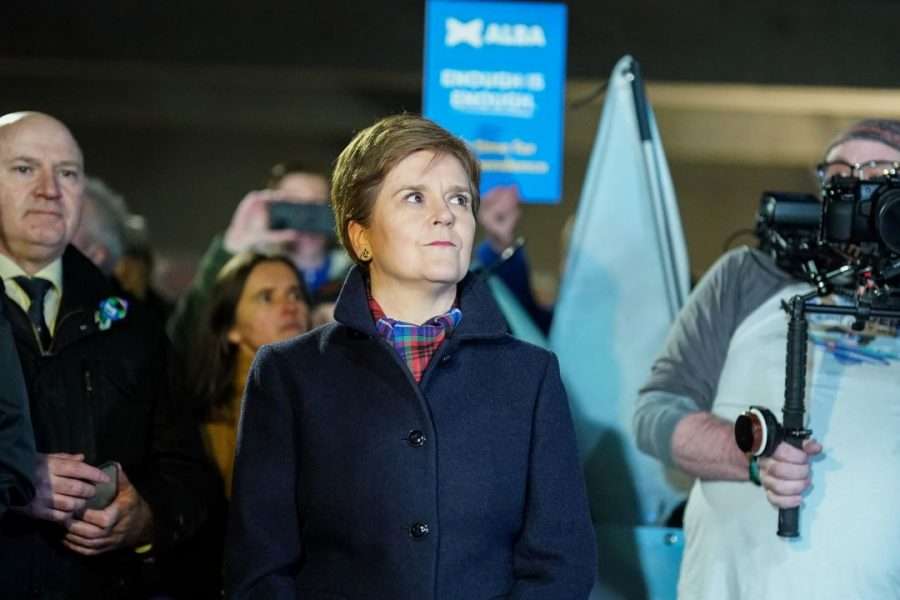 The UK Supreme Court has blocked an attempt to hold a new referendum on Scottish independence. The setback has exposed the limits of SNP leader Nicola Sturgeon’s strategy, which channeled the independence movement’s radical energies into a centrist cul-de-sac.

First Minister Nicola Sturgeon, leader of the SNP, is seen at a Scottish independence demo outside Holyrood, the Scottish Parliament, on November 23, 2022 in Edinburgh, Scotland. (Peter Summers / Getty Images)

On November 23, the UK Supreme Court ruled that Nicola Sturgeon’s devolved Scottish National Party (SNP) government did not have the legal authority to stage a referendum on Scotland’s independence from the UK without the explicit consent of Westminster MPs.

The verdict marked the end of Sturgeon’s ultracautious independence strategy — a strategy that has defined her approach to the issue since at least the Brexit vote in June 2016, which saw Scots overwhelmingly endorse the UK’s continued membership of the EU, while voters in England and Wales backed Britain’s withdrawal from the European bloc.

Under Sturgeon’s leadership, the SNP has slowly chiseled away at international opposition to the breakup of the British state, targeted its political messaging at center-ground Scottish constituencies, and repeatedly tried to persuade British political elites to negotiate around the UK’s constitutional impasse. Now, the SNP leader has reached an impasse of her own.

Her strategy has not been a total failure. Support for Scottish independence consistently hovers at or above the 50 percent threshold — higher than it has ever been in Scottish political history. Even after a decade and a half in power at Holyrood, Scotland’s semiautonomous parliament in Edinburgh, the SNP remains by far Scotland’s most popular political party and most effective vote-winning machine.

However, for all its undeniable electoral potency and focus-grouped precision, the one thing Sturgeon’s version of Scottish nationalism has not been able to deliver is independence itself. After last week’s ruling, perhaps it never will.

One of Sturgeon’s mistakes has been to bank on the essential reasonableness of the UK governing class — a curious misdiagnosis for a Scottish nationalist to make. For years, Sturgeon remained convinced that Downing Street would eventually bend to Scottish demands for another politically binding referendum, assuming that a sufficient amount of democratic pressure could be brought to bear on UK institutions.

One of Nicola Sturgeon’s mistakes has been to bank on the essential reasonableness of the UK governing class.

This belief was tested to destruction in the run-up to last May’s devolved Scottish election. Sturgeon told voters that victory for Scotland’s two main separatist parties, the SNP and the Greens, would constitute a “mandate” for a fresh independence vote and force Westminster to open discussions to that effect.

On May 5, 2021, the SNP and the Greens won seventy-one out of Holyrood’s 129 seats. But Sturgeon’s self-styled mandate failed to materialize, as the result was simply ignored by British Conservative politicians in Whitehall, who had also ignored similar results in 2016 and 2019.

Sturgeon then pivoted to the legal system. Over the summer, the first minister ordered Scotland’s top law officer, the Lord Advocate Dorothy Bain, to argue in front of the British Supreme Court that a purely “advisory” independence referendum, organized by Holyrood, would not breach British constitutional rules. (Under the terms of the 1998 Scotland Act, which lead to the creation of the Scottish Parliament in 1999, reform of the British state is “reserved” to the UK House of Commons.)

On November 23, the court unanimously rejected Bain’s argument. In Britain’s “democratic culture,” even a strictly advisory vote would carry a certain amount of legitimate political weight, the presiding judge, Lord Reed, concluded — voters would expect the result to be implemented. Therefore, a referendum on the end of the 1707 Anglo-Scottish union, arguably the centerpiece of Britain’s modern constitutional structure, cannot go ahead without Westminster’s agreement.

In the wake of this seismic ruling, Sturgeon now finds herself stuck — caught, on one side, by her sincere desire to secede from the UK legally and consensually and, on the other, by the UK government’s newly affirmed right to stop that from happening.

Speaking at a press conference in Edinburgh after the decision was made public, the SNP leader said she accepted the court’s position and would now seek “another legal, democratic” way for the people of Scotland to determine their own constitutional future. But it was impossible to disguise the scale of the setback that Scottish nationalism — at least in its current Sturgeonite form — had just suffered.

It was impossible to disguise the scale of the setback that Scottish nationalism had just suffered.

Sturgeon’s SNP prizes its image as a credible, moderate nationalist movement above all else. Since becoming leader in 2014, Sturgeon has moved the party toward the political center, distancing it from the rowdier elements of the nationalist movement and carefully positioning the idea of Scottish independence within the mainstream of European liberal democracy.

The party’s transition from the fringes of British politics has sometimes been painful. In 2012, the SNP abandoned its long-standing opposition to independent Scottish membership of NATO. Most independence campaigners are staunch critics of the British nuclear deterrent; NATO is a first-strike nuclear alliance.

In 2018, in an effort to win over business leaders, the party adopted a slate of economic policies which, if implemented, would have anchored Scotland to years of postindependence spending cuts. The policies were largely junked in the aftermath of the COVID-19 pandemic.

Faced with criticism from her fellow independence campaigners, Sturgeon has insisted that these compromises are necessary to advance the independence cause. A putative “yes” majority must encompass conservative, middle-class voters as well as left-leaning, working-class ones, she and her tight-knit team of political advisers argue. But now, the contradictions in Sturgeon’s gradualism are coming to the fore.

With her preferred escape routes — a referendum sanctioned by Westminster or a referendum opposed by Westminster but sanctioned by the courts — blocked off, Sturgeon has shifted to her independence “Plan C”: a “de facto” referendum. If independence-supporting parties, chiefly the SNP and the Greens, can secure a majority of Scottish votes at the next British general election in 2024, Scotland will have a renewed mandate for self-government — or so Sturgeon announced at her press conference on November 23.

The problems with this approach were immediately apparent. Why would Westminster react any differently to a nationalist victory in 2024 than it did in 2016, 2019, or 2021? What incentives would the unionist parties — Labour, the Tories, and the Liberal Democrats — have to accept Sturgeon’s framing of the election? Won’t a defeat for the SNP-Green bloc mean the end of independence?

“Plan C” also runs counter to the SNP’s long-term ideological trajectory. In the 1980s, the party argued that winning a majority of Scotland’s Westminster seats would be sufficient to trigger Scotland’s departure from the union. But it ditched that policy in the late 1990s after it became clear that Scottish voters would not endorse an accelerated lurch toward independence.

Since then, caution, on both the domestic policy and constitutional fronts, has been the lodestar of SNP politics. In 2012, Sturgeon’s predecessor, Alex Salmond, pressed for a multichoice referendum with enhanced devolution as the middle option between independence and the status quo.

Salmond was reportedly unconvinced that Scots were ready at the time for full-blown political divorce, but he nonetheless wanted to bolster Scotland’s autonomy from Westminster to keep the process of separation inching incrementally forward. He was right: in September 2014, spurred by a unionist promise of more powers for the Scottish Parliament, Scotland voted by a ten-point margin against leaving the UK.

Sturgeon’s new strategy thus reverses decades of SNP triangulation based on the assumption that Scots had to be lulled rather than wrenched away from the union. And it risks undermining the party’s much-cherished centrist respectability, which Sturgeon needs to maintain the approval of European leaders, who may one day have the power to fast-track Scotland’s independent reentry into the European Union — arguably the defining objective of the modern nationalist movement.

Worse yet, even if Westminster agreed to Sturgeon’s terms, a plebiscitary election would not make Scotland’s exit from the UK any more likely. Sturgeon says the SNP and the Greens will have to win the support of more than 50 percent of the Scottish electorate for their independence mandate to kick in.

But that threshold is prohibitively high. Thanks to Westminster’s antiquated first-past-the-post electoral system, in 2015, the SNP won fifty-six of Scotland’s fifty-nine Westminster constituencies with just 49.97 percent of the Scottish vote. Today, the party is polling in the mid-forties and may face a stronger challenge from Labour, temporarily revived under Keir Starmer, in some close-run Scottish seats.

The kind of comprehensive triumph Sturgeon envisions, then, will be extremely difficult to pull off. The political consequences of failure — including Sturgeon’s probable resignation as SNP leader and Scottish first minister — would be severe.

The cul-de-sac Sturgeon has led Scottish nationalism into may or may not have been avoidable. She is undoubtedly correct when she says that Scotland’s exit from the UK must be legally and politically watertight. She is right, too, to insist that Scotland’s constitutional arrangements should be governed democratically by the people of Scotland.

Instead, Westminster has adopted a garishly authoritarian stance that hands ultimate control over the Act of Union to English MPs in the House of Commons. If Scotland can’t freely leave the UK, the UK is not really free.

At the same time, many of Sturgeon’s critics within the independence movement saw this dead end coming. Rather than build a mass, extraparliamentary campaign drawing on all elements of Scottish civil society, from the Church of Scotland to the Scottish Trades Union Congress, she poured her strategic energy into expanding the SNP’s presence at Holyrood and Westminster, apparently in the belief that electoral politics alone would carve Scotland’s path out of the British state.

As a governing party at Holyrood, the SNP may be able to survive a “de facto” referendum defeat and Sturgeon’s subsequent departure from the Scottish political stage. If necessary, it can reinvent itself as a defender of Scottish interests within a reformed UK. But the cost of that trade-off will be independence — and it’s possible the trade-off has already been made.