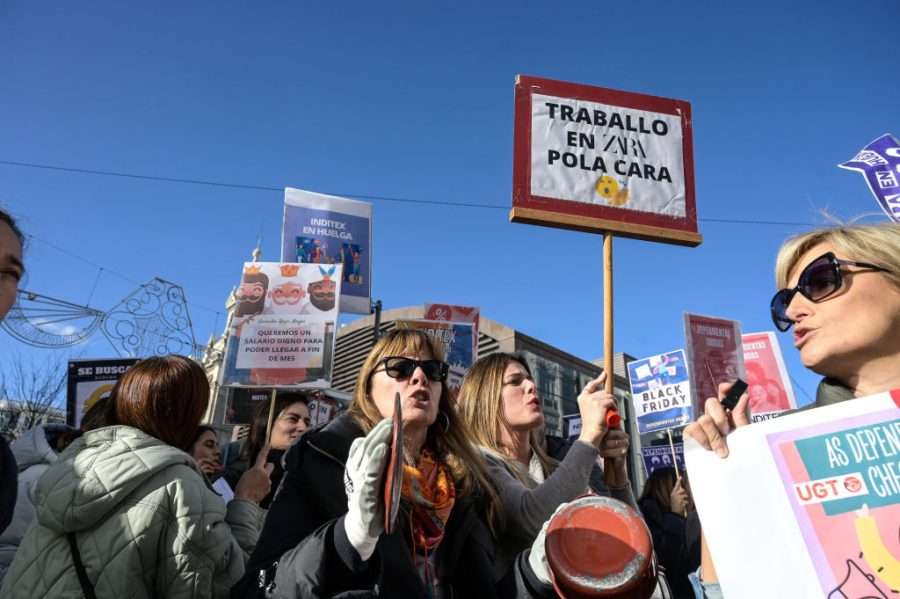 The owner of Zara is worth $50 billion, and this year net profits at Zara’s parent company Inditex increased 41 percent. Workers are demanding a bigger share of the profits they created.

Zara workers are on strike demanding an increase in pay from Zara’s parent company Inditex in Galicia, Spain on November 25, 2022. (Photo By M. Dylan/Europa Press via Getty Images)

Inditex began in the early 1960s in Galicia, a quiet region of Spain known for its choice seafood. Over time it grew to be the largest fast-fashion company on the planet, making its founder Amancio Ortega the richest person in Spain and the third-wealthiest person in Europe. As the parent company to Zara, which is now the largest clothing retailer in the world, Inditex has earned Ortega a net worth of over $50 billion.

Now, in the middle of the holiday shopping season, Spanish workers at Inditex are asking for their fair share of the shellfish.

Shop assistants who work at Zara and other fashion brands owned by Inditex organized two separate strikes last week. The first took place last Thursday in Madrid. The second took place both last Thursday and on Black Friday in La Coruña, the northwestern Spanish province where Ortega founded the company and still has a home.

Nearly all of the company’s forty-four stores in La Coruña were closed due to the two-day strike. Around 90 percent of staff, most of them women, stayed home from work during the stoppage, said Lucía Domínguez, a spokesperson for the Confederación Intersindical Galega (CIG), the labor union representing the striking workers in Galicia. Carmiña Naveiro, the Zara committee chair for CIG in La Coruña, said, “I have worked as a Zara sales clerk for twenty-six years and in the month I earn the most, I don’t get to 1,300 euros.”

Meanwhile, last Thursday in Madrid, shop assistants protested outside of the four-floor Zara in Plaza de España, the largest Zara store in the world. Zara’s Madrid workers are organized under the Confederación General del Trabajo (CGT), which planned the protests with the motto: “A dignified salary for a dignified life.”

Inditex’s core brand, Zara, is bigger than H&M, Gap, and Uniqlo. In addition to Zara, Inditex also owns brands including Bershka, Pull & Bear, Massimo Dutti, Oysho, Stradivarius, Lefties, and Uterqüe. Around 86 percent of Inditex’s 165,000 employees worldwide, most of whom are women, work in its retail stores. Net profits at Inditex for the first half of the 2022 fiscal year were record-breaking: They increased 41 percent to $18.5 billion, while revenues were up 24.5 percent, amounting to $15.4 billion. The workers who went on strike last week say that they deserve a bigger share of these historic earnings, especially as inflation continues to eat into their modest paychecks.

The strikes were called by CIG and some local members of the national CGT, Comisiones Obreras (CCOO), and Unión General de Trabajadores (UGT). They occurred just a week after representatives at Spain’s two largest unions, the CCOO and UGT, announced that they had reached an agreement with Inditex that would extend bonuses to workers. But striking workers did not feel that the agreed-upon bonuses were sufficient.

The national organizations of the UGT and CCOO did not endorse the strikes in Madrid and La Coruña, but they did take the opportunity to return to the negotiating table with Inditex to work out future salary increases, incentive-based bonuses, and sales commissions. So far, Inditex has offered to incrementally increase sales clerks’ salaries at all its stores in Spain by approximately $200 a month by 2025.

But the sales clerks who went on strike in Madrid and La Coruña rejected the proposal and demanded that salaries, which currently range from approximately $1,000.56 to $1,450 a month, be raised by roughly $450 a month. They argue that the increase would make their earnings comparable to those of Inditex’s warehouse workers — and that Inditex, with its galactic profits and high executive pay, can afford to provide better compensation for its workers.

It appears that UGT and CCOO are willing to accept the terms of Inditex’s offer. But CIG and CGT haven’t given up the fight. CIG announced on November 28 that Inditex shop assistants in Galicia will go back on strike in December. Meanwhile, CGT has called on Inditex sales clerks working in Madrid to strike on January 7, the first day of the after-holiday sales in Spain.

It’s unclear whether members of UGT and CCOO will join by striking simultaneously, or whether these strikes will spread from the nation that birthed the fast-fashion titan to any of the other 216 countries in which Inditex operates. Likewise, it remains to be seen whether the strikes will succeed in raising workers’ salaries. But if history is any indicator, mass work stoppages are the best bet for ensuring that there’s a deserved portion of shellfish on Spanish workers’ holiday tables this year.