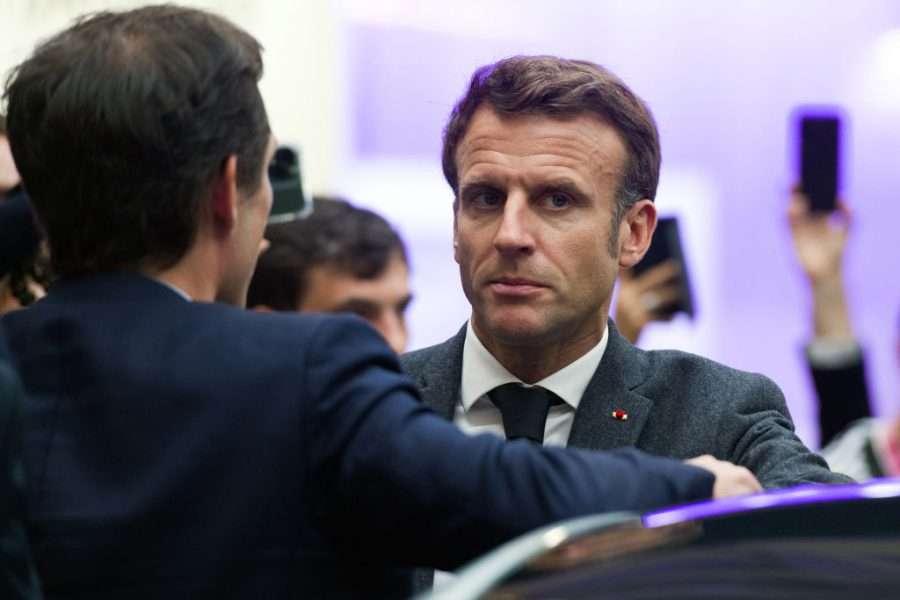 Rising inflation doesn’t affect everyone equally. The way this current bout of inflation is playing out isn’t a law of nature but a result of political decisions to protect investors while hanging workers out to dry.

French president Emmanuel Macron rejected the idea of indexing wages to inflation in a TV interview in October. (Nathan Laine/Bloomberg via Getty Images)

With the return of inflation, debates about public finances have come back down to earth. Such discussions must now deal with the most basic material level — meaning the incomes distributed through the state budget. The question is no longer about the theoretical positive or negative aspects of debt stocks and ratios, per se, but of the kind of protections from which some social categories benefit to the detriment of others. Where does the cost of inflation fall? Who will be hit?

Public finances are organized in such a manner that inflation strikes in a socially differential way. Certain social groups’ revenues are immune to this potential depreciation. But there is also conflict. The savings that investors and financiers place in sovereign securities, by subscribing to Treasury bonds, are exposed to a loss of value. Conversely, wage earners — whose income does not follow the evolution of the price index, or catches up only with a fatal delay — will suffer the consequences of inflation. Marxist economist James O’Connor has spoken of how “the class struggle had (partly) shifted to the State and its budget.”

Ten percent of debt in France (government bonds known as OATi), and 25 percent in the United Kingdom (through inflation-indexed gilts, or more simply linkers), is indexed to inflation. This kind of government-issued bond allows investors to protect themselves against the risk of a rise in the inflation rate — a bondholder’s greatest fear. In exchange for this protection, investors accept a lower base interest rate, which in turn reduces the state’s financing cost. Provided that price stability is maintained, this offers what neoclassical macroeconomist Robert Barro calls a “win-win” strategy.

If inflation unexpectedly rises, however, indexed bonds can cost the taxpayer dearly. Today, after falling steadily between 2010 and 2022, the cost of debt is rising again in France. Each additional percentage point of inflation increases the cost of debt by €2.5 billion, largely driven by the cost of indexed bonds. In the UK, the government’s interest payments more than doubled to reach £19.4 billion this June, driven by indexed gilts. Indeed, recent turmoil on capital markets contributed to the fall of Liz Truss’s government. On October 11, in order to fight against “material risk to UK financial stability,” the Bank of England expanded purchases to index-linked gilts to prevent a self-reinforcing “fire sale.” The calming effect was immediate, at the cost of the “central bank’s credibility, according to investors.” In this new world, the protection against inflation is no longer working by itself and needs derisking by central banks through the deployment of a “safety net” and stabilization efforts. But where do these inflation-indexed bonds come from?

Inflation-indexed bonds were developed as an extension of disinflationary monetary policy. Treasury departments banked on a noninflationary monetary policy, designing a sovereign bond that would strip governments of the option of eroding debts by generating inflation. The introduction of the UK linkers and French OATi prompted conflicts between money and debt technocracies over distributional issues — also establishing an opposition between workers’ and financiers’ interests.

In a recent letter to Emmanuel Macron, Banque de France governor François Villeroy de Galhau welcomed “the abandonment, since the 1980s, of generalized automatic wage indexation mechanisms,” which had tied incomes to price rises. For him, this “should help avoid a trigger that would ultimately be a loser for both households and companies, as well as the entire economy, as we saw during the oil shocks of the 1970s.” Twenty-five years earlier, in 1997, as chief of staff to finance minister Dominique Strauss-Khan, Villeroy de Galhau had pushed for an automatic indexing mechanism, but only as a privilege for one specific group: investors.

Recent political proposals to reduce taxation — made possible by an increased appeal to state borrowing — are deepening social inequalities.

Linkers were part of a fierce competition between European sovereigns for liquidity and access to global capital in a world where modernity was no longer about political control of capital, prices and credit allocation, or monetary financing. Since Germany — the main French competitor and benchmark of the European monetary system — had not started yet to issue inflation-indexed securities, French technocrats thought they had a card to play. Villeroy de Galhau belongs to a generation in France that sought to follow the US sovereign bonds template, in line with the Americanization of its array of securities beginning in the early 1980s.

This small group of state entrepreneurs was particularly at odds with its predecessors, such as then governor of Banque de France Jean-Claude Trichet, who later became president of the European Central Bank. The debate around linkers also expressed a generational conflict among bureaucrats. While for the young guard at the end of the 1990s, the struggle against inflation lay well in the past, older officials like Trichet still had an almost visceral distrust of indexation clauses and mechanisms. For this so-called “competitive disinflation” generation of technocrats, any such mechanism would mean reopening Pandora’s box — something “which is, by definition, very bad,” explains a former Banque de France governor. One former debt manager insists that any kind of reindexation was hard to swallow when, as a technocrat, your time, career, and honor were dedicated to deindexing everything you could:

The fight [against inflation] had to be waged on many fronts, including health insurance expenditures, old age pensions. . . . We are in the realm of politics: “If we start reindexing the public debt, tomorrow it will be the salaries of civil servants [that are indexed]. The day after tomorrow, the minimum wage! In three days, pensions!” You can see how completely Pavlovian this was.

But Villeroy de Galhau and French debt managers of the time worked hard to enlist Trichet — and convince him that indexing financial revenues did not represent the same “risk of inflationary contagion” as indexing wages or pensions. Yet as indexed bonds gained momentum, tensions rose between Treasury policymakers and the Banque de France. Trichet, getting off a plane, learned on the phone about a forthcoming public announcement — and became mad as hell. The debt management officer remembers how he attempted to temper Trichet’s anger:

I found the phrases I probably used, it’s almost word for word, and I think Jean-Claude [Trichet] would recognize [this account]: “Listen to me, instead of accusing me of reviving inflationary tensions . . . I’m betting that you’ll succeed and I’m putting my money in. If you win, I win. If you lose, I lose.” Then he started to grumble, he wasn’t yelling anymore. I said, “I am the Frenchman who trusts you the most, because I am the only one who is directly betting my money on your success.” And with that argument, he let it go. Basically, that’s what was extraordinary: the world had changed. Thanks to central bank independence, time had healed the old wounds between public financial management, on the one hand, and monetary policy, on the other. It had become a positive-sum game.

At the end of the 1990s, the “world had changed” — but only for a while. In France, the Socialists in office in the 1980s had acted as arbiters among the social classes, more than fifteen years before the invention of this new sovereign type of bond. In the case of the United Kingdom, the introduction of the linkers in the early 1980s had a direct impact on the social competition over inflation hedging that was then taking place.

In a fine recent research article, economic historians Michael J. Oliver and Janette Rutterford recount how, from the 1950s to 1970s, the UK Treasury and the Bank of England remained resolutely hostile to any form of indexing that might jeopardize stability and confidence in the pound sterling. As they saw it, the introduction of indexed gilts “would be a public admission of the probable decline in the purchasing power of the pound.”

Nigel Lawson, financial secretary to the Treasury under Margaret Thatcher, played a key role in introducing these securities, which he considers a reform as important as the abolition of exchange controls in 1979. He recalls that Thatcher was initially “instinctively opposed to indexation, which in a way validated inflation.” Historians have explained how much things changed in the early 1980s after Thatcher’s election. The shift to conservative money-supply targets, combined with growing difficulties in managing government securities, made linkers an opportunity. Inflation-indexed bonds would save the risk premium, retain a client base of investors who could rebuild their margins with real yields, and, most importantly, send the message that the government was committed to fighting inflation.

The debate over social equity that emerged in technocratic spheres would distinguish pension recipients, whose retirement-savings investments needed inflation-hedging tools, from wage earners, considered better protected “by nature.” The pursuit of wage deindexation and the introduction of bond indexation were simultaneous policy agendas. During consultations in 1980, the UK secretary of state for trade and commerce, John Nott, voiced his disapproval: “How could the government justify indexing payments to its creditors and not to its employees?” Denouncing inequal social treatment, he spoke of a “scissor effect.”

Such a position contrasted with the concerns of the UK Treasury, where officials were worried that debt indexation would cause a “negative psychological link with wage indexation.”

Recent political proposals to reduce taxation — made possible by an increased appeal to state borrowing — are deepening social inequalities. The interests of the financial system are derisked, thanks to central banks’ interventions to create “safety nets,” while workers’ interests are kept unsecured and at risk. In France and in the UK, the rights of the jobless are curtailed, employee statuses are dismantled, there is increasing recourse to temp staff, and the right to strike is routinely threatened. In an official TV interview on France 2 on October 26, President Emmanuel Macron rejected the idea of putting “all wages on automatic indexation”: “We are not an administered economy; it is not the state that decides wages.”

This was a telling confession on what kind of value the financialized state can decide to maintain for bonds and financiers’ revenue, but not for workers’ incomes. The state prefers to set up tax incentives for employers to allocate tax-free bonuses to employees when “the economic cycle allows it.” The state, once again, is derisking the corporate sector while capitalists profit from tax decreases, feeding the debt-machine loop of private accumulation.

Pandora’s box has been opened once again, deciding who will be protected from inflation and who will not.