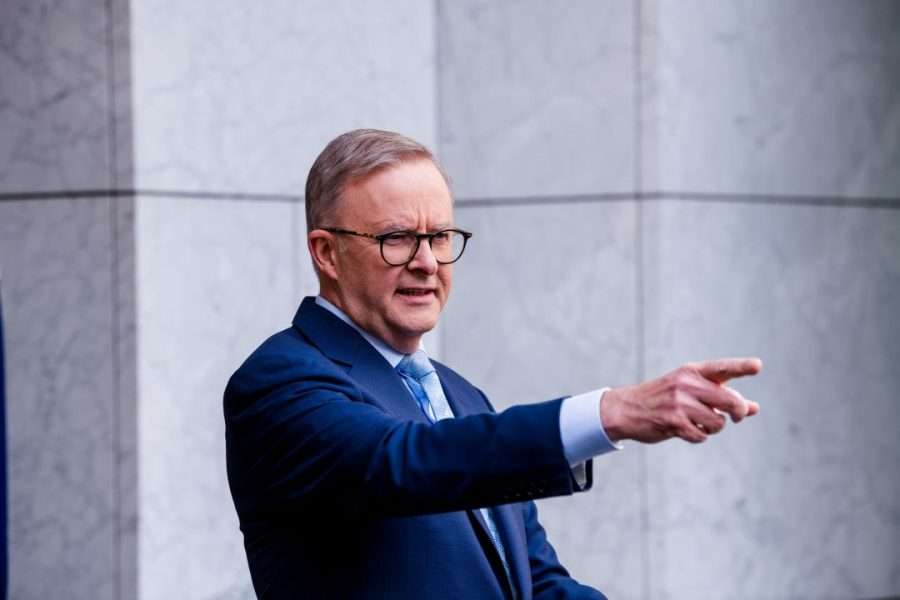 After decades of stagnant wage growth and the collapse of the enterprise bargaining system, Australia is in crying need of industrial relations reform. The Labor Party’s Secure Jobs, Better Pay Act promises this — the question is whether it can actually deliver it.

In the lead-up to Australia’s federal election in May this year, reporters asked Labor leader Anthony Albanese whether he supported an increase in the minimum wage for Australia’s lowest-paid workers. “Absolutely,” he replied, adding that in his view, the minimum wage should rise by at least 5.1 percent to match inflation.

Predictably, this led to howls of protest from the Coalition government, business groups, and their cheerleaders in the right-wing, pro-business press. They claimed it was economically irresponsible. According to then prime minister Scott Morrison, Albanese was “running off at the mouth,” and there was “no magic wand to increase wages.”

Since winning the election, the Labor government has focused on implementing its policy plans to lift workers’ real wages — primarily through the Secure Jobs, Better Pay Bill. With support from the Greens and independent senator David Pocock, last week, the legislation passed the Senate.

Labor developed and enacted its IR reform package in record quick time. It remains to be seen, however, how effectively it will extend collective bargaining and improve the ability of workers to win better pay and conditions.

A Decade of Stagnant Wages

For over ten years, wages have grown slowly in Australia. It’s the result of a combination of moderate annual increases to the minimum wage by the Fair Work Commission (FWC), federal- and state-level public sector pay caps, and the collapse of enterprise bargaining.

Soon after this year’s election, the Albanese government formalized its support for wage increases in a submission to the FWC’s annual wage review case. In June, the commission handed down its decision, awarding a 5.2 percent increase for employees on the national minimum wage and 4.6 percent for those on award pay rates.

These pay bumps were modest in the context of the galloping rate of inflation, fueled by rising energy costs — due largely to the war in Ukraine — and increases in mortgage interest rates. And even without these factors, they were well beyond what would be needed to reverse stagnant wage growth.

So, the stage was set for the new Labor government’s first major piece of legislative reform, the Secure Jobs, Better Pay Bill. Then, in early September, Labor and the unions made the case for major changes to the system of enterprise bargaining at the Jobs and Skills Summit held in Canberra.

Then Labor PM Paul Keating established the framework of Australia’s enterprise bargaining system thirty years ago, with support from Bill Kelty, who was the head of the Australian Council of Trade Unions (ACTU).

The idea was to shift away from the traditional system of setting wages and conditions for each industry through awards, legally enforceable documents determined by an industrial tribunal. Awards would provide a safety net of minimum standards, above which workers and unions could bargain with employers at the enterprise level. Through these enterprise agreements, improvements in pay and conditions would be linked to productivity gains.

Over the first twenty years of its operation, some stronger unions obtained gains for their members through enterprise bargaining. Increasingly, though, it has become focused on delivering efficiency to firms, with many unions raising concerns that after seven or eight rounds of bargaining there is simply no more productivity to extract from workers.

The enterprise bargaining system remains the main avenue to above-award wage increases for most Australian workers. Despite this, the number of agreements being made has creaked to a halt.

Labor’s IR laws are intended to confront this problem at the core of the enterprise bargaining system and, in so doing, lay a foundation for wage growth.

The Jobs and Skills Summit

Employers have complained that under the current system, the process of making enterprise agreements and getting them approved by the Fair Work Commission is already too complex.

Unions, however, have pointed to a much bigger impediment to wage growth. They are unable to bargain effectively with leading firms that drive down the cost of labor through outsourcing, labor hire, franchising and other business models that have proliferated since the 1990s. By allowing firms to sidestep enterprise agreements, these strategies have contributed to the declining incidence of agreements in the private sector.

At the same time, hundreds of thousands of workers — mostly women — in government-funded sectors have never been able to engage in enterprise bargaining. This is due to a combination of low bargaining power and the inability to compel multiple dispersed employers into one agreement-making process under current laws.

This has left aged-care, early-childhood, and disability-care workers stuck on the minimum wages and conditions mandated by federal awards.

Weeks before the Jobs Summit, the ACTU announced its own proposed solution to the problems of stagnant wages and the weakness of the enterprise bargaining system. It argued that Australia’s industrial relations system must widen access to multiemployer bargaining.

Rather than unions having to make separate agreements with each separate hairdresser or childcare center, bargaining could instead take place for an agreement covering multiple businesses in those and other sectors. Plans for a “flexible” model of multiemployer bargaining in microbusinesses would also be developed under an agreement reached between the ACTU and the Council of Small Business Organisations Australia.

By late October, Burke had introduced the Secure Jobs, Better Pay Bill into the House of Representatives. It is a massive piece of reform legislation, proposing the most extensive rewrite of the Fair Work Act since its enactment in 2009.

The major focus of the bill, however, is to overhaul the processes for making enterprise agreements between employees, employers, and unions.

The act introduces two main new options for multiemployer bargaining. One is aimed at assisting low-paid workers predominantly in government-funded services and the other at facilitating bargaining with two or more employers in several other contexts.

Unions will be able to access supported bargaining on approval from the Fair Work Commission. As part of this, the FWC will be mandated to take into account the common interests of the multiple employers, including whether they rely on government funding.

With union membership now at around 14 percent of the workforce and the level of industrial disputes at record lows, the provisions in the act amount to nothing like a recipe for 1970s-style, industry-wide strikes.

Importantly, there will be no necessary threshold of employee support required for multiple-employer bargaining in the supported bargaining stream. As a consequence, this stream offers significant potential for low-paid workers in the care sectors — and possibly others including cleaners and security guards — to engage in collective bargaining.

Second, the act enhances the existing single interest bargaining stream by allowing wider access in multiemployer contexts. Again, this will require authorization by the tribunal.

While the FWC won’t be required to consider whether employers support engaging in single interest bargaining, there are a host of other factors that will determine access to this stream. These include the public interest as well as the common interests of the employers — for example, their geographic location, and whether they operate under the same regulatory regime. FWC will also assess the nature of the enterprises in question, including the terms and conditions of employment applying at each of them.

This might enable multiemployer bargaining across a fast-food chain or a group of regional universities. However, according to Labor’s IR laws, it will be harder to initiate single interest bargaining with companies who outsource work — for example, Qantas. It will also be difficult to engage in multiemployer bargaining or to gain an agreement with businesses that comprise complex supply chains, like those making up Amazon’s logistics and distribution network.

It will also be harder for unions to gain entry to single interest bargaining than supported bargaining. This is because Labor’s legislation requires unions to prove a majority of workers at each of the relevant businesses supports going into a multiemployer agreement in the single interest stream.

In addition, under amendments agreed to by the government to obtain Senator Pocock’s support, businesses with less than twenty employees are excluded from single interest bargaining. Those with under fifty employees will be allowed to exit multiemployer bargaining pending approval from the FWC.

With union membership now at around 14 percent of the workforce and the level of industrial disputes at record lows, the provisions in the act amount to nothing like a recipe for 1970s-style, industry-wide strikes.

But Labor’s IR reform package does provide important new levers for unions to organize and run bargaining campaigns across multiple businesses. Some unions will prove more capable than others at developing strategies to utilize these statutory hooks to engage in multiemployer bargaining. And importantly, all unions will have to withstand the avalanche of obstruction through litigation that employers will bring to bear against the new laws.

A Labor government should not be limiting workers’ freedom of association by blunting the effectiveness of a union like RAFFWU.

One area of concern in the act is that it weakens the better-off-overall test (BOOT). Previously, the BOOT required that proposed agreements be assessed against the relevant award, to ensure that every employee (and every prospective employee) will be better off overall under the deal. So, for example, a new agreement might grant workers an increase in base hourly rates of pay in return for trading off some award restrictions on working hours and rostering, provided workers are better off overall.

Business groups have complained that the FWC applies the test too rigorously when considering if agreements should be approved. The government conceded and proposed scrapping the BOOT for prospective employees. Thanks to an amendment secured by the Greens, this proposal was removed from the act prior to passage.

However, when assessing agreements under the revamped BOOT, the act also requires the FWC to give primacy to the views of the employer and a registered union that has been involved in making the agreement.

This is a clear attempt to sideline the unregistered Retail and Fast Food Workers Union (RAFFWU). In recent years, RAFFWU has held to account many employers and the “shoppies” union (the Shop, Distributive and Allied Employees Association, SDA), which covers retail workers, by opposing at FWC proposed agreements that potentially undercut the award minimums. Labor’s changes to the BOOT test will effectively rule out this strategy.

A Labor government should not be limiting workers’ freedom of association by blunting the effectiveness of a union like RAFFWU. Investigative journalist Ben Schneiders has recently profiled RAFFWU’s excellent work in defending the interests of low-paid, mostly young, mostly casual workers in retail and fast-food in his new book, Hard Labour: Wage Theft in the Age of Inequality.

Despite this flaw, however the Secure Jobs, Better Pay Act is overall a necessary improvement on Australia’s current, flawed legislative framework.

The speed of the government’s legislative process has been impressive. If the bill is imperfect, it is nonetheless likely to open up opportunities for unions going forward. Whether this is sufficient to reverse decades of wage stagnation remains to be seen.