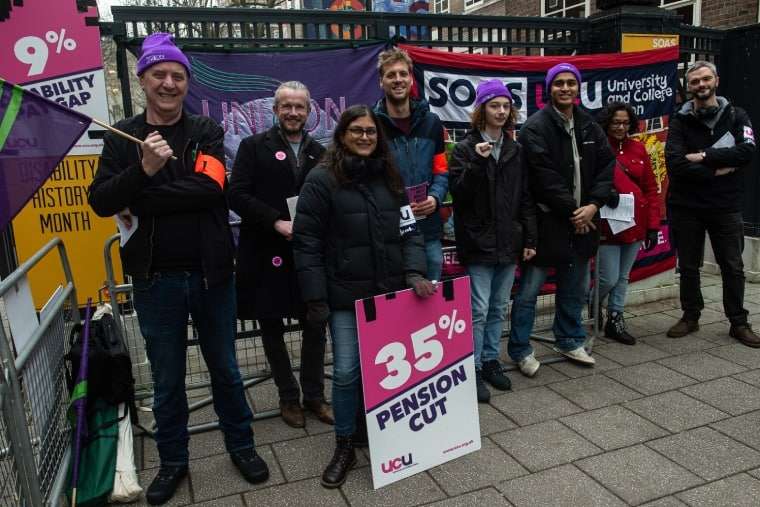 UCU and Unison union strikers on the picket line together outside Soas university in central London (Picture: Guy Smallman)

Should workers fight for strike pay?

In most types of strikes, workers in most unions are entitled to a daily rate of strike pay, typically set at a rate lower than they’d usually earn. Unions like to boast of their million-pound “war chests” as part of sabre-rattling ahead of key disputes.

They do this to scare the bosses and reassure members that they can afford to stay out long enough to win. Strikers should fight to receive proper support from their unions, so people aren’t forced to give up action prematurely. After all, it is funded through their membership fees.

For instance, it’s a good development that the left-led industrial action committee at the Unison union recently doubled daily strike pay from £25 to £50 a day. But strike pay is double-edged. If workers believe they can’t strike without it, then it means if the union officials stop paying up, then the strike ends.

It becomes a weapon of control for them. Activists should never argue that walkouts can only happen if there is sufficient strike pay to cushion workers from any hardship. The reality is that striking often involves short-term financial loss, but a victory results in better deals and stronger organisation.

Two notable examples in the current period is that postal workers in the CWU union and university workers receive no strike pay at all. As Socialist Worker went to press, they had struck for 13 days—so the question of financial survival for workers becomes even more urgent.

It’s going to be a more urgent question about how workers can cope with a much-reduced pay packet. Raising money for strikers is important. It funds people on the picket lines, and also raises the political profile of the strike in general.

And it’s also very important for those who do a collection among their fellow-workers. It means the message of strikes is spread more widely, and activists can see who gives to the collection. These are people who can be won to struggle in the future. By appealing to other workers for financial solidarity, strikers put an important argument that the success of their own dispute will make it easier for other workers to win.

One good example is the National Gallery dispute of 2015. Workers won a long-running all-out strike, partly through how successfully they won solidarity in the wider trade union movement. Despite not being paid their full wages by their PCS union, they could resist bosses’ pressure for them to end the strike.

This was partly achieved by strikers speaking at trade union ­meetings and showing up to picket lines for other workers in dispute.  It’s a good example that shows the success of a dispute can’t simply boil down to how well unions fund strike pay.

What should non-unionised workers do?

Socialists think all ­workers should join a trade union in their workplace. But not being a member of a union isn’t a block to taking some action. Whatever workplace you are in, it is possible to start organising for better pay, against bullying bosses and for better conditions.

The first step has to be talking to your colleagues, working out who shares your grievances and wants to fight back. The next could be pulling those people into a group that can discuss what to do next. Often you can start with issues outside the immediate workplace—anger about racism or action over climate chaos for example.

Bringing workers together to sign a letter or a petition can make it clear that workers have demands and that they will fight collectively until they are met. When workers start to realise their strength the next step could be to organise a “wildcat strike.” These kinds of strikes do not go through the processes of organising postal ballots and all the other obstacles outlined in the Tory anti-union laws.

An inspiring wave of resistance through Amazon facilities in the summer showed it’s possible to resist without a union. Workers engaged in walkouts and slowdowns to stop the job “becoming a rapid descent into hell,” one striker told Socialist Worker. And the Coventry warehouse is an excellent example about how wildcat action can lead to longer-term organisation.

Some workers there are now members of the GMB union and are busy re-balloting after narrowly missing the legal threshold in a strike vote. Amazon workers—and all those who undertake wildcat action—show that workers can organise effective resistance.

Union officials are keen to recruit workers who organise wildcat strikes, not just because it will swell their membership numbers or because they’ll win. Some want to maintain a degree of control over the momentum of the labour movement in general.

That shouldn’t put workers off joining unions where possible. But it is right to be wary about the kind of role the crushing weight of formal processes may play in their action.

“Solidarity forever,” is a perennial cry of the working class movement. But what is it exactly, and does it matter? Solidarity is the idea that those fighting should fight alone—but it’s more than just a feeling of unity. Solidarity could mean respecting a picket line and not crossing it or sending a message of support.

It could also mean making a financial donation to a strike fund or bringing along sandwiches to strikers. Raising solidarity isn’t just about asking for practical support with the dispute but about winning the argument that everyone in the working class benefits when fightbacks win.

Solidarity can take many forms, but the most effective is workers taking action together. It’s this type of working class unity that the ruling class hate—that’s why, officially, solidarity strikes are illegal under the anti-Tory laws.

But that wouldn’t stop workers—engaged in official disputes in their workplaces—striking simultaneously and hitting the bosses hard. Winning the argument about delivering solidarity means wider numbers of people will get involved when there is resistance.

If a delegation of students supports a picket line, they’ll know which union rep to contact next time they go into occupation and are calling out for a helping hand themselves. Ultimately solidarity is about more than supporting individual disputes. It’s about building links between different groups of people, making the entire working class movement stronger as a result.

What’s the question you would like us to answer? Let us know and we’ll try to do it in a follow up to this article. Email reports@socialistworker.co.uk or message us on social media