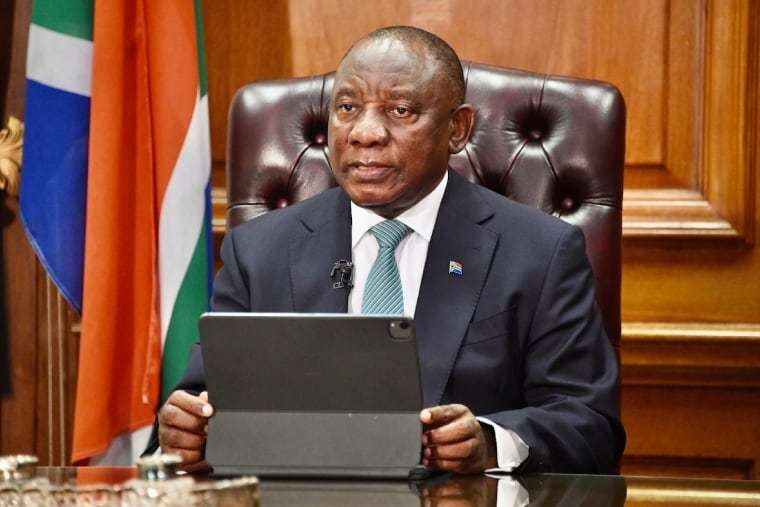 South Africa’s ruling African National Congress (ANC) is considering whether to remove Cyril Ramaphosa from the country’s presidency. It follows a damning parliamentary report into a scandal over the theft of bundles of cash from his private game farm.

The ANC’s national executive committee began debating Ramaphosa’s future on Friday—and then adjourned until Sunday. Days earlier an investigation suggested he might have broken the law. The report concluded that he should be investigated for possible impeachment, prompting calls from the main opposition parties for him to step down.

The suspicions began with claims by one of Ramaphosa’s rivals, linked to South Africa’s disgraced former president Jacob Zuma. He revealed allegations that millions of dollars—hidden in a sofa—had gone missing from Ramaphosa’s high-end Phala Phala game farm, and that there had been a police cover-up.

Where had the money come from? Was it a product of corruption and corporate bribes? The parliamentary panel concluded “there was a deliberate decision to keep the investigation secret”. And that more cash appeared to have been stored at the farm than the £475,000 that was stolen.

The president declared that he was innocent. But the story has not gone away, and as fresh details and denials have leaked out support for Ramaphosa has ebbed away. In an echo of the removal of Tory Boris Johnson, ANC leaders who once ignored corruption claims now wonder if Ramaphosa is still an electoral asset. They fear he might lead the ANC to defeat in 2024.

A major ANC conference is set to begin on 16 December and Ramaphosa was well ahead in the race to be the party’s presidential choice. He has 2,037 nominations from party branches to Zweli Mkhize’s 916. Mkhize, a former health minister, is also under investigation in a graft scandal linked to the pandemic.

The Ramaphosa crisis is itself a symptom of a far deeper ANC failing. Almost 30 years since the end of the apartheid regime and the election of Nelson Mandela, South Africa is one of the most unequal societies on the planet.

The official statistics show a third of workers are unemployed, and a wider definition takes that to almost 45 percent. Half of the country’s 59 million people live in poverty. The ANC governments have for decades privileged the corporations over ordinary people. And Ramaphosa is forever associated with the massacre of 34 miners at Marikana in 2012.

He was a non-executive director of Lonmin, the mining firm that worked with the police to carry out the killings. Instead of wider social transformation, a small section of black people clustered around the ANC have enriched themselves by entering the boardrooms or inserting themselves in state institutions. Many have used these positions corruptly. The ANC is leaking electoral support. In nationwide municipal elections a year ago, it took less than half the overall vote for the first time in its history.

And there is resistance. As well as revolts in the township and among students, a workplace shutdown led by trade unions was a major success in August. A high-profile dock strike in October showed workers’ capacity to organise and win.

After a long Covid slumber, the working class and its allies are on the move again. Crucially the August shutdown united both union federations. These are the more independent South African Federation of Trade Unions and the Congress of South African Trade Unions which is traditionally in alliance with the ANC.

Whatever decision the ANC now makes about Rampahosa, the deeper crisis will remain.