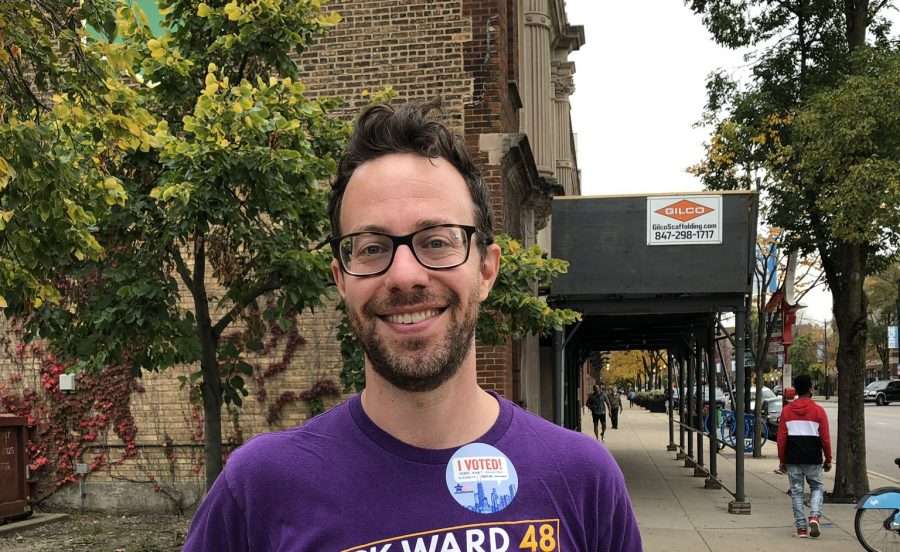 The Chicago City Council’s Socialist Caucus has five members. Nick Ward wants to join them. We spoke to the socialist candidate about his campaign.

Chicago has been the site of significant municipal-level socialist electoral victories in recent years. Socialist community organizer Anthony Quezada won a seat on the Cook County Board earlier this year, and the city council’s Socialist Caucus has five members. Nick Ward is hoping to join that caucus.

A community organizer, restaurant worker, artist, and renter, Ward is endorsed by the Chicago Democratic Socialists of America and is running to replace three-term incumbent Harry Osterman on Chicago’s city council. The 48th ward includes portions of the neighborhoods of Uptown, Edgewater, and Andersonville on Chicago’s North Side.

Brynn Schaal spoke with Ward about his campaign and his visions of a Chicago centered on working-class politics. This interview has been edited for length and clarity.

Why did you decide to run for alderman?

In the summer of 2020, I joined a group of community organizers who had been doing a lot of work in the 48th ward. They had formed in 2019 specifically because our current alderman, Harry Osterman, was going to vote in favor of a new police academy on the West Side, and they had organized to agitate him to vote against it in a campaign that became known as No Cop Academy. When he voted “yes,” they were incredibly frustrated and got together to organize with the future intention of running someone against him four years later.

I joined in 2020 right around the George Floyd uprisings, and I joined the group 48th Ward Neighbors for Justice. I got involved in protests and organizing around police accountability, police brutality, and the police budget. I was doing street-level market research about what people in our community think about police and presented it to Osterman. He completely disregarded me and the community. That really started my journey as a community organizer in the 48th ward.

After that summer, I joined my local school council at Goudy Elementary School. There are almost forty languages spoken at that school, but it’s also a school that’s facing some challenges, particularly related to unaffordable housing for families, that have contributed to an enrollment decline double the rate of such decline in Chicago Public Schools as a whole. When it came time to draft a candidate for alderman, I was pushed by some of the comrades I’ve organized with.

I did a lot of mutual aid work throughout 2020 and into 2021. After the May 30 [George Floyd] protests here in Chicago, public schools cut off the meal program for students and families — I did grocery delivery. We also helped get folks in hotels during the polar vortex.

You have a background in theater and the arts as well as restaurants, yes?

I moved to Chicago because I wanted to be an actor, but I ended up doing a lot of production management work and casting. I joined a storytelling organization called Second Story and curated and produced shows. A lot of managing a theater production and putting a live event together is community organizing. You’re making sure everybody is organized around a shared concept, you’re elevating people into leadership, and you’re really bringing people together around something that is meaningful to them. That equipped me to be a successful community organizer in my neighborhood. I also think having a ton of experience sharing my stories in public settings with people I didn’t know and asking them to make a commitment to understanding what I was trying to say really helped me prepare for the kinds of relationships I want to build with people in the 48th ward.

I’ve spent my life in nonprofits but have also worked in restaurants, so I saw exploitation play out through multiple avenues. Restaurants demand fealty to their institution while also making sure their staff is constantly at odds with each other rather than banding together. The servers are getting mad at the kitchen when the food doesn’t come out on time, and the bussers are mad at the servers because the servers are not helpful, and the servers are mad at the hosts because they feel like they’re not being adequately seated because their income is based on tips. It’s an incredibly toxic environment that’s created in order for people to fight each other. I saw that over and over again — I spent twenty years working in restaurants — and I saw the deep inequities in the system for people to fight each other rather than find solidarity.

What do you believe distinguishes you from Chicago’s other socialist-identified aldermen?

We have a lot in common. I think one thing that distinguishes me is that there’s something about the Far North Side that hasn’t really been tapped into from a socialist electoral perspective, in a way that some of the other socialist aldermen have really been able to do. I’m thinking of the work Alderwoman Jeanette Taylor did as part of the Dyett Hunger Strike campaign, which wasn’t explicitly socialist, but was deeply rooted in socialism in my opinion.

Why do you think there hasn’t been any socialist activity in the 48th ward and other neighboring wards?

It is not entirely true that there hasn’t been explicitly socialist politics in this part of Chicago. Uptown has a rich history of Fred Hampton organizing with the Young Lords and the Young Patriot Party. That history does exist here, but in terms of the political history of the 48th ward specifically, it hasn’t really existed.

In some cases, it’s just the longevity of the dynasty that’s held the seat. Kathy Osterman won this seat in 1987, and she won by organizing all of the block clubs. The block clubs are singular institutions. Two years later, she was appointed to the Daley administration, and her campaign manager and chief of staff Mary Ann Smith was the alderwoman from 1989 to 2011. Then Kathy’s son, Harry Osterman, who had been the Illinois state representative for a decade, ran for that seat, and in 2011, 2015, and 2019 won over 80 percent of the vote every single time.

I think my campaign is trying to upend the political dynasty, longevity, and power they had, which has neutered working-class politics. Osterman announced his retirement in July. That is after three years of organizers in the 48th ward continually making explicit demands that would serve working-class people in this community.

We need to ask ourselves, what kind of a city do we want to build? I think we want to build a city that serves working-class people, and where we put investment in our neighborhoods and public spaces. Right now we have a city that tries to bill Chicago as this world-class tourist destination, and that comes at the expense of everyone who lives in the neighborhoods. I want to see us remake the city into one that supports people’s ability to live here. That means we advocate for building affordable housing. That means we’re building permanent, supportive housing for the homeless by passing Bring Chicago Home, which would raise taxes by 1.9 percent on properties over $1 million and put the money toward housing the homeless.

That means we’re protecting tenants by passing the Just Cause ordinance, which would put an end to no-fault evictions. I want to make sure our public schools are fully and equitably funded and that we are expanding our sustainable community schools. I want to ensure our schools have nurses, social workers, restorative justice practitioners, librarians, and janitors who are all staffed with union contracts so our schools remain incredible community-focused spaces.

I think we should invest in public sources of care and harm reduction. That means passing Treatment Not Trauma, which would send trained social workers instead of cops to people experiencing mental health crises. We want to be able to support people with public investment. That is the kind of city we all deserve.

I also want to make sure that we’re investing in public infrastructure so that we can make streets that are walkable and bikeable. If we make streets that serve cyclists and pedestrians, we can have a community where people can come together without having to spend money. That to me is really important and is how we build a city we can all participate in.

During the last municipal elections in Chicago, the Democratic Socialists of America established a beachhead on the city council. What do you think of what they’ve been able to accomplish so far, and how would you want to add to that?

I’m really inspired by the work they’ve been able to do on the city council. I think about ordinances like the Bodily Autonomy ordinance, focused on protecting reproductive rights, that Rossana Rodríguez–Sanchez just helped pass, and I think about the Woodlawn Housing Preservation ordinance that Jeanette Taylor worked on, and I think about the 100 percent affordable housing building that Carlos Ramirez-Rosa got built in the Logan Square neighborhood. I see a bloc of politicians achieving real victories that help support the people in their communities and the people of Chicago. That to me is the legacy of the 2019 socialist class of alders.

The Chicago Teachers Union (CTU) has transformed Chicago politics over the last decade. A former teacher, CTU staffer, and current Cook County Board member, Brandon Johnson, is running for mayor, and the union has endorsed him. What do you think of Johnson and his campaign?

The 48th ward is in an area of the city that has historically been incredibly racially and economically diverse. It also borders on Lake Michigan and features some desirable real estate. What is your plan for ensuring continued affordable housing in the ward?

We have to make sure that we are preserving our current affordable housing. We’ve seen time and again buildings here in the 48th ward that have been redeveloped into luxury apartments, and we see how that displaces low-income people, so we have to make sure we’re preserving affordable housing. That includes some of the remaining single-room occupancy hotels. That includes buildings like the Pines of Edgewater, which have a large footprint along the Winthrop-Kenmore Corridor of low-income housing. That includes Chicago Housing Authority buildings for seniors. This is the biggest project right now, because we know with the northward movement of gentrification along the lakefront — and the CTA Red and Purple Line Modernization project that will be finished in a couple of years — that there will be some desirable land here, and we know that developers are eyeing it.

We also need to build more affordable housing. We need to make sure we’re passing Bring Chicago Home, which would restructure the real estate transfer tax to provide $168 million annually for permanent supportive housing to our homeless neighbors, in addition to wraparound social support services. We need to make sure that when we do work with developers who are building here, we ensure that they’re expanding the required affordable units, that those affordable units are family-sized, and that we are building those units on-site. Finally, we need to make sure that we’re preserving the historic two- and three-flats that line Edgewater and Andersonville which have also been the sites of affordable housing.