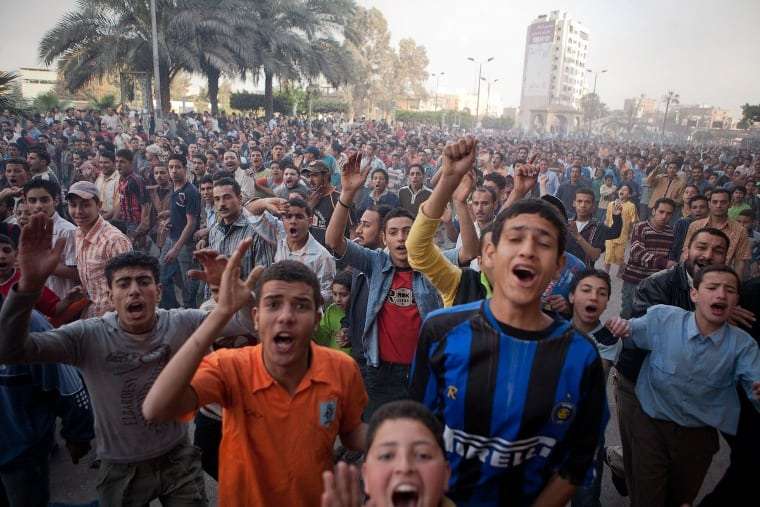 Rising food prices force thousands onto the streets in Mahalla, Egypt prior to the revolution in 2011. (Picture: Jameskbuck)

Whether they think of themselves as political or not, a great many people are drawn into struggles that have an impact on the kind of society we live in. Think about the strikes that have spread across the working class in Britain recently, or the fights against oppression, or protesters trying to ­highlight the danger of climate catastrophe.

They are all examples of people taking action against one aspect of the system. But many people’s ­experience of joining battle, even if over a comparatively small issue, is that it changes them. They now see more potential in uniting with others, and they fall less easily for the lies sown to divide us.

Not only that. Many find they can, perhaps for the first time, see connections between their own struggles, and those of others. Some will go further still and understand that behind all the rottenness of the world stands a single system—­capitalism—that needs to be overthrown.

The great Russian Revolutionary Leon Trotsky understood this process well. “The masses go into a ­revolution not with a prepared plan of social reconstruction, but with a sharp feeling that they cannot endure the old regime,” he wrote.

“Only the guiding layers of a class have a political programme, and even this still requires the test of events, and the approval of the masses. The fundamental political process of the revolution thus consists in the gradual comprehension by a class of the problems arising from the social crisis—the active orientation of the masses by a method of ­successive approximations.”

A closer look at recent ­struggles shows why Trotsky was right to see even the smaller battles as seeds for a far wider change.

In Sudan, trebling of bread prices and other basic goods lead to ­protests. These spiralled into a revolt against the Omar al-Bashir regime in 2019, leading to months of protests, sit-ins and strikes.how

In Egypt, unrest had been brewing for a decade. Then in 2011 the murder and torture of a young man, Khaled Said, and a revolution in nearby Tunisia, triggered an uprising.

The initial plan isn’t ­necessarily to make a revolution, and those taking part are often on different pages about what the solution is. So, how do struggles go beyond limited reforms and ultimately challenge for ­workers’ power?

It’s true that one big crisis isn’t going to bring down the system. Our rulers won’t let their rule collapse under the weight of its own contradictions.

We can’t wait around. There’s no guarantee that what follows next is a glorious revolution and socialist society—it depends on how organised our side is. The task is to convince our class that it has the power to free itself.

Workers are exploited under capitalism, with profits derived from the surplus value they create. That’s why when ­workers withdraw their labour, the system halts. On a mass scale it can paralyse it for good.

Workers, as Karl Marx said, are the “gravediggers of capitalism”. Capitalism is an unplanned system of bosses competing with each other, racing to accumulate more wealth. Attacks on workers are plentiful. Not every worker who strikes over pay is going to see ­themselves as the agent of systemic change.

Workers are told they’re too stupid to run society for themselves. This is reinforced when disputes are kept to the individual workplaces’ problems. And the way ­workers are today excluded from any meaningful control over their jobs and society mean they can believe they have little control over how things happen.

But when on strike, or out on the streets, workers can see themselves as the force for real change. Fighting for even the most limited demands raises ordinary people’s consciousness about what is possible.

As Marx wrote, “This mass becomes united, and constitutes itself as a class for itself. The interests it defends become class interests. But the struggle of class against class is a political struggle.”

The workers’ fight is boosted when tackling both political and economic questions. It makes them able to challenge the reactionary ideas that keep them divided over gender, ­sexuality or race.

It’s easier to see that it’s not refugees who are to blame when it’s your boss spreading lies in the media. This doesn’t happen ­over night. But the real enemy becomes clearer when ­workers struggle collectively.

Ideas and possibilities develop during struggle. This can be seen in Sudan’s ­resistance committees, ­organised through general assemblies, executive committees and delegates based on local and district-wide coordination.

The networks ran society during the revolution, emerging when government factions split. They bring activists together, call people to the streets, ­organising mass strikes and ­protests, and have even ­overseen the supply of flour, bread and gas and other essentials.

But there are always forces trying to limit struggle. Repressive anti-union and anti-protest laws look to restrict resistance at every level. Union leaders want strikers to accept the first deal they can get, and don’t encourage them to look beyond their economic battle to the wider political struggle.

Ideas coming out of a struggle aren’t ­automatic. Sometimes a below-inflation pay rise is enough for a worker who thinks they couldn’t win anymore.

That’s why filling ordinary people with as much confidence as possible is crucial to ­overcoming the might of the system grinding them down. Each battle is an opportunity to arm our side with the ideas it needs for the bigger challenges ahead.

Revolutionaries must be involved in every partial struggle. From national strikes over pay to local disputes over rotas. From global movements such as Black Lives Matter to demonstrations for trans rights. It means being “tribunes of the oppressed” and uniting and pushing movements to their most radical conclusions.

Revolutionary politics don’t start with a revolution. Fighting for reforms and justice in the here and now is important, as that’s what develops people’s ideas.

But challenging the system as a whole and going beyond reforms gives us the best chance of making lasting change. This means going further than individual campaigns and movements to a more general fightback.

To kick off a revolution needs a mass walk-out of workers. That’s reflected in our  agitation for bigger strikes. It’s not just so they win their dispute, but so that as many workers as possible have the opportunity to understand their strength.

Revolutions also give way to new forms of democracy—economic and political power and decision-making really being in the hands of workers. That’s why it’s crucial ­workers are in control of their own strikes, through voting and strike committees. Then they can begin to realise they don’t need politicians to do it for them.

Revolutionaries also call for defiance of anti-union and ­protest laws, cops on picket lines and state repression. That’s not because it looks fun, but because during a ­revolution ordinary people clash with the existing regime. They confront the state at every level—from the media to the courts—because it is built against our interests.

Russian revolutionary Vladimir Lenin said revolutions are “festivals of the oppressed”. Central to any workers’ takeover of power has to be the ­contestation of divisive oppression—wiping away as Marx said the “muck of ages”.

Fighting those divisions now, alongside economic issues, reveals where these ideas really come from, and whose interests they serve. And crucial to any successful revolution is a strong revolutionary party rooted in the working class. It has to be ready to organise people together when crisis escalates and steer the struggle.

That organisation has to be built now, not later when it’s too late. Workers preparing for such a takeover of power gives us the best chance of winning the world we need.