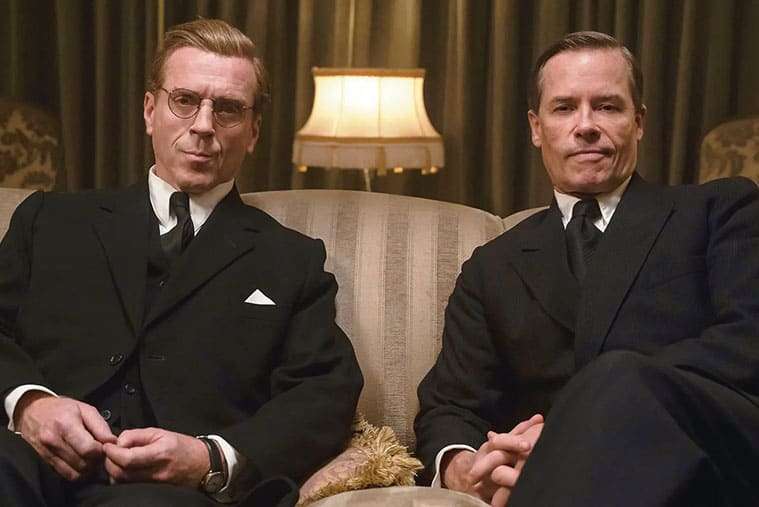 United by calling and class: Damian Lewis as Nicholas Elliott and Guy Pearce as Kim Philby in A Spy Among Friends

Few spies have had their career and character so thoroughly rehashed in literature and the media as the British spook Kim Philby. The shock he gave the British establishment that produced him when he defected to Russia shouldn’t be underestimated.

That Philby not only refused to play the game that gentlemen like him were expected to play but engaged in covertly subverting it lies behind his reputation as a cad.

Philby was educated at Westminster and Trinity College, Cambridge. He was a journalist for the Times in the 1930s and the Middle East correspondent of the Observer at the time he fled to Russia in 1963.

He worked full-time for the spies from 1940 to 1951. Between 1944 and 1947 he was head of a department he established to counter Russian operations against Britain.

From 1949 to 1951 he was in the US as the liaison officer with the CIA and the FBI. Every night he took home files, copied them, and gave them to his Russian handlers. He appeared to be destined for a top job, but was forced to resign after other Russian spies he was close to defected to the USSR in 1951.

The latest to try on the Philby mask(s) is Guy Pearce in A Spy Among Friends, which spins round Philby’s exodus from Beirut.

The prelude was a four-day grilling from his old Secret Intelligence Service friend and colleague Nicholas Elliott (Damian Lewis). In this telling, both MI5 and the KGB point a searchlight into their friendship.

There is no doubting their privilege. Philby and Elliott were united by both calling and class. Both were debonair, at ease and in no doubt of their own superiority and their ability to trade in secrets and lies.

Even at the eleventh hour, a coterie of posh men who believe they instinctively understand one another hope to emerge with a gentlemen’s agreement. And perhaps they do.

Apart from Beirut, A Spy Among Friends unfolds in a set of claustrophobic interiors, all impeccably grim. One room even has a symbolically stuck door.

This dramatisation is based on the book by Ben Macintyre. He is having quite a run on screen after a film of his book Operation Mincemeat, and the hokum of his SAS: Rogue Heroes.

Over the years it has served the Western and Russian Intelligence services to overstate the effect of Philby. That’s partially because it covers up a shared history of entitled brutal incompetence.

Philby’s commitment to Stalinism was more real than is often shown. It wasn’t an affectation but a belief in taking sides and sticking to them.

The series improves the book by the introduction of deliberate fictions rather than adding to the trainspotting of “facts” that innumerable books on Philby offer. But it tends to share Macintyre’s love of the daring-do of the rich as being somehow useful in the Second World War.

There is a sense that what Elliott finds most disturbing about being questioned at all is that the questioner is not of his class or gender. That’s not how things were supposed to be done.

Every time a question is asked, a portal slides open and the plot melts into memory. It chops the story up into a collage stretching back to the Blitz and beyond to Vienna in 1934.

While truth eludes capture, the performances are outstanding. This unflattering portrait of the British establishment is worth spending time with.