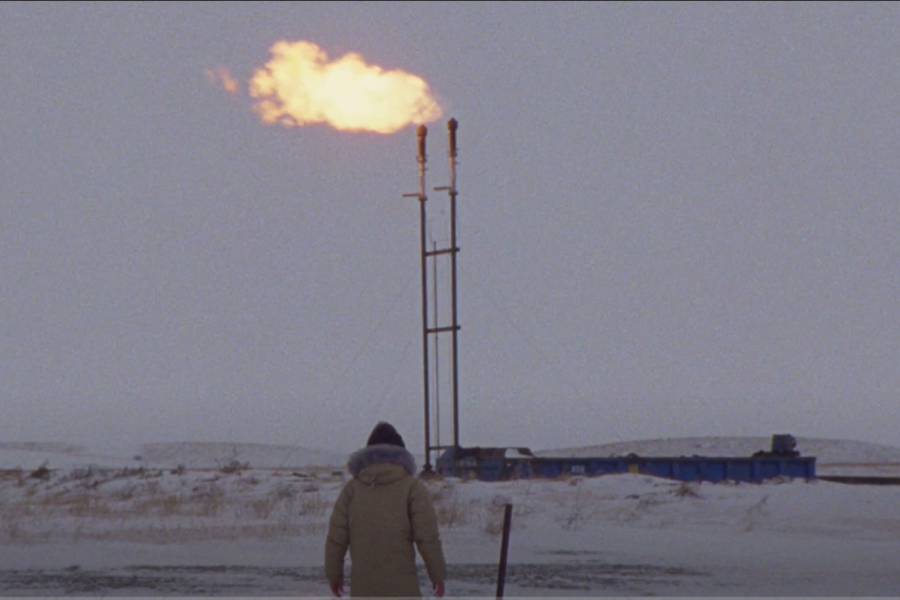 The film How to Blow Up a Pipeline explores themes from Andreas Malm’s book of the same name by way of a heist thriller, in which fictional activists grapple with the real question of whether disruptive action helps or hinders a mass climate politics.

How to Blow Up a Pipeline does not arrive at any easy answers. But it does ask if we are using a wide enough range of strategies to limit the worst effects of climate change. (Neon / 2022)

Last year Andreas Malm published the book How to Blow Up A Pipeline, which argued that property damage and sabotage were legitimate and necessary tactics for a climate activist movement trying to stop irreversible ecological damage. “The ruling classes really will not be talked into action,” Malm wrote. “They are not amenable to persuasion; the louder the sirens wail, the more material they rush to the fire, and so a change in direction will have to be forced upon them. The movement must learn to disrupt business as usual.”

This year’s eponymous feature film, directed by Daniel Goldhaber, explores the political themes in Malm’s book by way of a heist thriller. In the movie How to Blow Up a Pipeline a group of eight, united in opposition to unfolding climate catastrophe, undertake to sabotage an oil pipeline in West Texas. They’re guided by the motto: “If the law will not punish you, then we will.”

The fictional movie is based on Malm’s idea that widespread and constant destruction of carbon-emitting structures is the most effective way to make fossil fuels unprofitable, with pipelines being an especially vulnerable target. The film is at least partially an endorsement of Malm’s perspective, but it also raises a critical question about his approach: What are its implications for mass climate politics? The climate emergency can’t be addressed by small groups of vigilante actors alone; the movement must develop a popular character to truly succeed. Are disruptive tactics more likely to attract or repel the public?

The film’s gang of eight are brought together by personal circumstances, each character a personification of the far-reaching and pervasive effects of climate change: oil refinery–related cancer, death from a heatwave, the destruction of indigenous land and culture, and so on. The activists are jaded and exasperated by powerful figures’ inaction, and have seen firsthand how the working class shoulders the burden of fossil fuel consumption. They’re ardent Malmites: no longer viewing local antidevelopment activism or divestment campaigns as viable solutions, they have instead turned to more radical means.

Occasional vigilante actions notwithstanding, today’s climate movement is broadly opposed to property destruction, as Malm observes in his book. The rationale has nothing to do with the sacredness of property, but with the glaring problem of climate activism in the United States and the rest of the developed world: the working class is largely uninterested, and the climate movement must somehow bring it into the fold in order to succeed. Illegal property destruction is not necessarily mutually exclusive with mass class-struggle movement strategy, but it can undercut it if ordinary people are turned off by sabotage or anything else that could be used to paint protestors as violent renegades.

In Goldhaber’s film, this tension plays out between two heist group members, Shawn and Xochi, as they discuss how to create a disruption in the oil industry. Shawn is concerned that blowing up an oil refinery has the potential to cause an ecological disaster or hurt somebody, to which Xochi curtly responds that “sabotage is messy.” Shawn doesn’t want to give the public a reason to invalidate or condemn the action, while Xochi maintains that the activists have to do something dramatic that will not only cause real damage to fossil fuel interests but also prompt people to react.

The activists hope that their pipeline sabotage will generate enough visibility to start a popular discussion and inspire others to join in. Xochi’s approach is strategic, not haphazard: she insists that there needs to be a narrative and call to action associated with their act of sabotage, so that it doesn’t just go down in history as an isolated event with no ripple effects. The group’s targets are deliberate, and the plan ultimately makes a clear distinction between violence against property and physical attacks on people, while also trying to minimize ecological impact.

Goldhaber’s portrayal is thus sympathetic: these are not rash vengeful actors, but dedicated and intelligent activists who see sabotage as the only remaining avenue to catalyze substantial change. Along the way, the group grapples with its identity. Are they ecoterrorists, or trailblazing activists whose intervention will inspire the working class to action?

The debate is a critical one for the real-world climate movement. Capitalists are destroying the planet for profit, and workers are the sector of society with the greatest power to disrupt capitalist profits through strikes and other coordinated mass actions. Therefore there needs to be a groundswell of working-class organization and support for climate action in order for it to be durable and meaningful.

As climate scholar and frequent Jacobin contributor Matt Huber writes, “climate change is a class struggle — that is, it is a struggle to build mass social power to confront some of the wealthiest and most powerful sectors of capital in world history.” And waging effective class struggle requires an organized working class on board with the project. Whatever its other considerations, the climate movement must take up the question of how best to achieve that objective.

In the film, the group pull off their act of sabotage. But viewers are left wondering what happens next: Were the activists caught and punished? Did their action meaningfully disrupt fossil fuel markets? How was it received by the press, by the public? Did it inspire others? The filmmakers are smart to leave it open, as these questions remain unsettled in the real world. As the debate over recent demonstrations defacing famous pieces of art shows, they’re playing out all around us.

The film How to Blow Up a Pipeline does not arrive at any easy answers. But it does ask if we, people living in a burning world, are using a wide enough range of strategies to limit the worst effects of climate change. In moments of tense dialogue between group members, it also hints at the importance of working-class power, and the necessity of climate activists tapping into it.