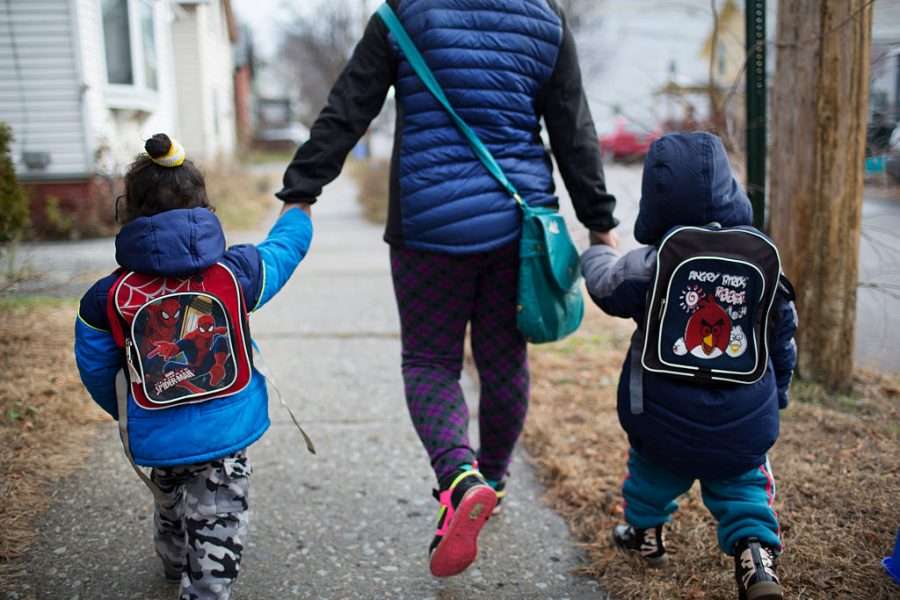 American childcare workers like me are confronted every day with a basic fact: the United States has more than enough resources to provide public, high-quality childcare to everyone who needs it, yet it chooses not to.

It’s 8 a.m., and like every other morning at this time, I open the door of the day care classroom. I say, “Good morning, everybody,” to the kids and my teaching partner, a tall woman with a commanding voice. She is fifty-four years old, with three grown kids, and has been working on the job for six years. She immediately informs me that she is quitting.

I already heard her voice the possibility of leaving childcare to work at Starbucks, Target, or Amazon. But I never took these claims seriously. She explained that we were well paid in the childcare job market but poorly paid in the general job market. She left day care that day, then traveled from St Louis to Kansas City to work in a warehouse, probably receiving more money for longer work hours.

Typical American early educators are poor. The two of us earned about $13 per hour; many early educators earn just above minimum wage. In Missouri, where I live, the average wage for a childcare worker is $11.71, according to the CareerExplorer website. Last year, 29 percent of childcare workers were so poor that they experienced food insecurity, according to a paper by researchers at the University of Oregon. Economic insecurity is a reality among the childcare workforce, regardless of years spent in the field or higher education degrees.

Childcare workers are poor and often have less training than workers in other educational fields, a consequence of the low social prestige of caring for children aged 0–5 years. Childcare workers make up one of the most underpaid workforces in the United States. We are more likely to be women of color than teachers of older children, according to a report by the Center for the Study of Child Care Employment (CSCCE) at the University of California, Berkeley.

Day care and childcare workers are in debt. The survey from the National Association for the Education of Young Children shows that in December 2020, nearly 42 percent of childcare provider respondents said they took on debt using personal credit cards to pay for supplies and other items. In March 2022, before the announcement of federal loan forgiveness programs, a Stanford University survey showed that 19 percent of childcare providers had student debt, 2 percent more than the US adult population overall, and 17 percent reported that they were carrying educational debt for others.

And we are less organized as a workforce than other education workers. According to the Union Membership and Coverage Database from Georgia State University and Trinity University, in 2018, the union membership rate was just 4.8 percent among childcare workers, a low number compared to preschool and kindergarten teachers, whose union rate is 14 percent, and elementary and high school teachers, at 45 percent. The overwhelming majority of childcare workers lacks an organized voice to speak for them.

The perverse logic of the market cannot meet the needs of American children.

Within a year in childcare work, I saw many people appear and leave my workplace in Missouri, most of them leaving to work in other fields. My personal experience fits with bigger trends. According to the US Bureau of Labor Statistics, the childcare sector now has at least a hundred thousand fewer workers than before the coronavirus pandemic. The childcare sector was actually 9.7 percent smaller in October 2022 than in February 2020.

In contrast, the demand for childcare is on the rise. In 2020, around one in five unemployed working-age adult said the reason they were not working was because they couldn’t secure childcare, according to research by the US Census Bureau and Federal Reserve. Today, this demand is probably greater.

It’s not just because of COVID. According to the Office of Child Care, the number of available childcare facilities decreased strongly from 2006 to 2017. In 2018, the Center for American Progress said that half of Americans lived in “childcare deserts,” areas where only one day care option is available for every three children who need care. Add to this the fact that childcare workers are disappearing, we see that the sector has been on a long trajectory of shrinkage without effective countermeasures from politicians. The state of childcare provision in America, in short, is dire.

The childcare worker shortage is not an isolated case. It connects to three other recent problems related to the neglect of support for early childhood.

First, earlier this year, American families simply had nowhere to buy infant formula to feed their babies due to a shortage caused by import restrictions and high market concentration. Second, in the beginning of this month, Emily Baumgaertner reported in the New York Times on the crisis and closure of pediatric units in hospitals, spurred by the fact that adult beds are bigger moneymakers than children’s. Third, Bryce Covert reported in the Nation that one-third of American families have difficulties providing enough diapers for their children.

All these crises involving childhood are rooted in the absence of state involvement in and regulation of desperately needed goods and services for children, indicative of the lack of priority for supporting childhood in American society. Childhood can’t stay just under market dynamics.

All these crises involving childhood are rooted in the absence of state involvement in and regulation of desperately needed goods and services for children.

The United States government does not assume responsibility at any level to ensure that such services are high quality and affordable to all American children and families. Instead, early care education policy is a private, family-oriented, market-oriented responsibility. Unlike many developed countries, the world’s most powerful economy does not have an early childhood education and care system for children aged 0–5 years.

The American childcare policy is a fragmented and confusing set of uncoordinated policies related to funding at the federal, state, and local levels, contrasting sharply with satisfactory experiences in other capitalist countries heavily subsidized by the government like Sweden, Denmark, Norway, Finland, and Holland.

We need to build a public early childcare system. This system begins with the establishment of a generous maternity leave for parents as a right, including adoptive parents. This will depress the search for day care and improve the relationship between families and children. And there is no early childcare learning system if we don’t think about a salary increase for workers in the sector. The federal government should establish a minimum value for hours worked pegged to inflation. Childcare workers need financial support and easy access to higher education. The childcare workforce will not stop shrinking if the imperatives of the market remain absolute in the industry.

Every day I go to work thinking about the fact that American society has the material conditions to improve the quality of service, the food nutrition offered, and the well-being of children, all while providing dignified conditions for workers. The government has to build a public day care system; we can’t entrust childcare to the private sector.