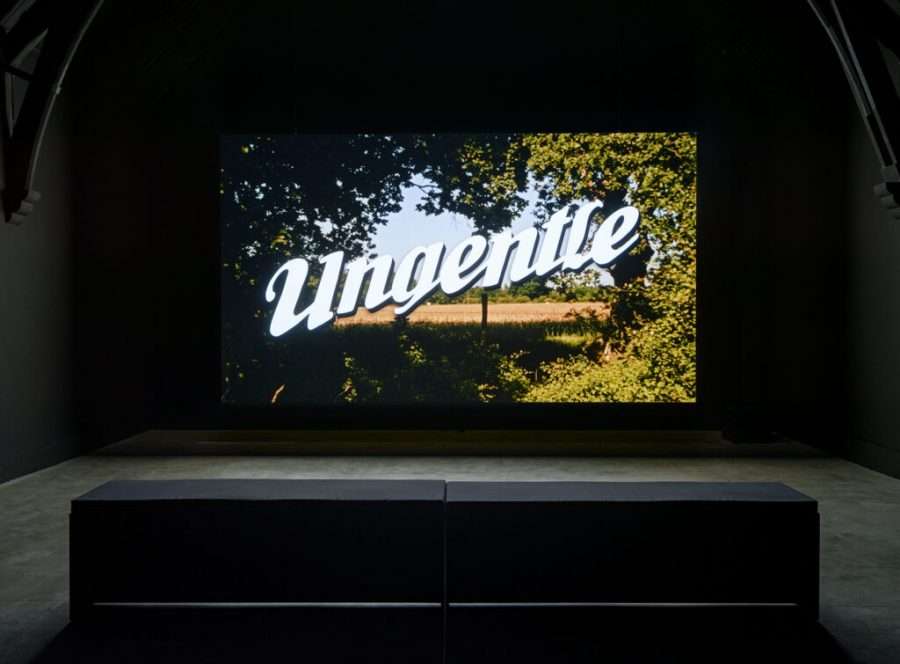 The Cold War’s Red Scare came alongside a Lavender Scare, which saw police ramp up the surveillance and blackmail of gay men. A new film inspired by the story of the Cambridge Spies explores the relationship between the two.

All the spaces depicted in the film add up to a double-coded picture of England both longing and hate-filled; a landscape of privilege fit only to be destroyed, and a place of, in the parlance, ‘outstanding natural beauty’. (Studio Voltaire)

A decade or so ago, the Pet Shop Boys wrote a song about the end of the Cold War in Britain called ‘Building a Wall’. Complaining that ‘there’s nowhere to defect to anymore’, the song’s narrator decides on another approach to the problem of England: ‘I’m building a wall, a fine wall; not so much to keep you out—more to keep me in’. That is, it would be nice if there were somewhere for whom you could betray Britain, given that so long as there isn’t, you’re trapped here. ‘Espionage’, says the narrator of Onyeka Igwe and Huw Lemmey’s film project Ungentle—which runs at Studio Voltaire in south London until January—‘is an English craft’.

It is this slightly camp but wholly sincere sense that this country is inherently deeply corrupt—a place that should be betrayed as a matter of moral hygiene—that powers through Ungentle. It purports to be the recollections of an English spy, homosexual and Communist, who tells his tale over a montage of shots of particularly southern English locations. This makes it at first appear like one of the many films that have borrowed from Patrick Keiller’s ‘Robinson’ films, London (1994), Robinson in Space (1997) and Robinson in Ruins (2010), three powerful, explicitly socialist, and bitterly funny and extremely sad films about the English urban, rural and peri-urban landscape. For all their greatness, these films convinced a lot of young men that if you compiled some minimalist shots of trees and cooling towers with a booing-voiced narrator you could capture some of their magic. Though the references are there—with its assertively upper-middle-class voiceover by Ben Whishaw filling in well for Paul Scofield’s astonishing performance in the first two ‘Robinson’ films—Igwe and Lemmey’s film avoids the cliches, for several reasons. First, it’s much more visually imaginative than the norm—Igwe’s sweeping, lush camerawork is doing a lot more than the usual deadpan static camera, creating a Powell and Pressburger-like vision of English grandeur and evil. The other reason that it is stuffed full of the dark humour, the anger, the strangeness, and most of all, the queerness that are usually expunged from Keiller’s work by his many imitators.

Lemmey should be familiar to Tribune readers as a regular contributor to the Culture section, and is also the author of two books of pornographic political slash-fiction, Chubz: The Demonisation of my Working Arse and Red Tory: My Corbyn Chemsex Hell. Although the intersection of British politics and sexuality is also the subject of Ungentle, it is a much calmer, apparently more restrained work than those two chaotic, lurid novels. Its fictional narrator is based on actual defectors, particularly, I assumed, on Sir Anthony Blunt; surveyor of the Queen’s Pictures, one of the major British art historians of the twentieth century, the former art critic of the Spectator and a long-term spy for the Soviet Union.

With the surely obvious proviso that the Soviet foreign intelligence service was in no way morally defensible—a force that systematically lied and tortured its way through Spain and later, Eastern Europe—it is still weirdly thrilling to recall the sheer extent of the activities of its famous British agents, and the amount of damage they managed to do to the British Establishment from within. All of the ‘Cambridge spies’ were of aristocratic or upper-middle class backgrounds, all of them from families that were at the very heart of British power, and all of them were converted to Communism in the 1930s, at a time when it was felt by many that socialism was being built in the Soviet Union, that only the USSR was truly capable of defeating the Third Reich, and that only socialism could stop the misery of the Great Depression from returning again. We can at this distance say they were wrong about the first of these, and clearly right about the second and third; it was a rational choice, if one that involved systematic lying and the daily betrayal of their friends and associates. But of the Cambridge spies—Blunt, Guy Burgess, Donald Maclean, Kim Philby—only Philby was heterosexual. As Ben Wishaw’s narration puts it, ‘we were easily persuaded of the benefits of the cloak and dagger approach’. Already inured to a ‘double-life’ of sorts, Burgess, Maclean and Blunt were ideal spies, although in the case of Burgess so drunk and indiscreet that his KGB handlers hired him as a double-bluff, convinced nobody would possibly believe they would have hired him. The other three were rather more icy in their temperament, as any reader of Philby’s brutal autobiography My Silent War would know.

In the ’50s, when the spies came to be gradually unmasked, the ‘Red Scare’—never as severe here as in the USA, but very real, with suspected Communists kept out of the BBC, the Civil Service and much of the educational system, as revealed in David Caute’s recent Red List—went alongside a ‘Lavender Scare’, in which the police and the secret services markedly stepped up their surveillance and blackmail of, in particular, gay men. The locations in the film can be unpacked by those who know these histories, some of which are signposted in the film, some of them not. Cambridge Circus, where the secret services had some very ordinary offices above shops in the West End, used in the superior 1970s adaptation of Le Carre’s Tinker Tailor Soldier Spy; St James’s Park, an interwar cruising spot in the shadow of Whitehall’s spires; Marxist economist Maurice Dobb’s redbrick ‘Kremlin’ in Cambridge; and strangest of all, the modernist villa of Warren House. With its jetty overlooking the Solent, it stands in the desolate New Forest landscape of Beaulieu, just outside Southampton. It was built for the Tory politician Lord Montagu of Beaulieu, who was imprisoned for his homosexuality in 1954; it was built on a site which had been used as a training school by the Special Operations Executive, a wartime secret army described by Churchill as the ‘Ministry of Ungentlemanly Warfare’.

All of these spaces add up to a double-coded picture of England that is both longing and hate-filled; a landscape of privilege that is fit only to be destroyed, and a place of, in the parlance, ‘outstanding natural beauty’; a cityscape of stuffy Edwardian office blocks and 1930s luxury flats, neo-Gothic villas and picturesque parks. It is in these spaces that the spies were raised, and it is this which they rejected, knowing they were reserved only for those, like themselves, who were born into it. ‘Nobody chooses treachery’, says the narrator at one point. ‘We chose socialism’.

Ungentle is showing at Studio Voltaire until 8 January 2023.