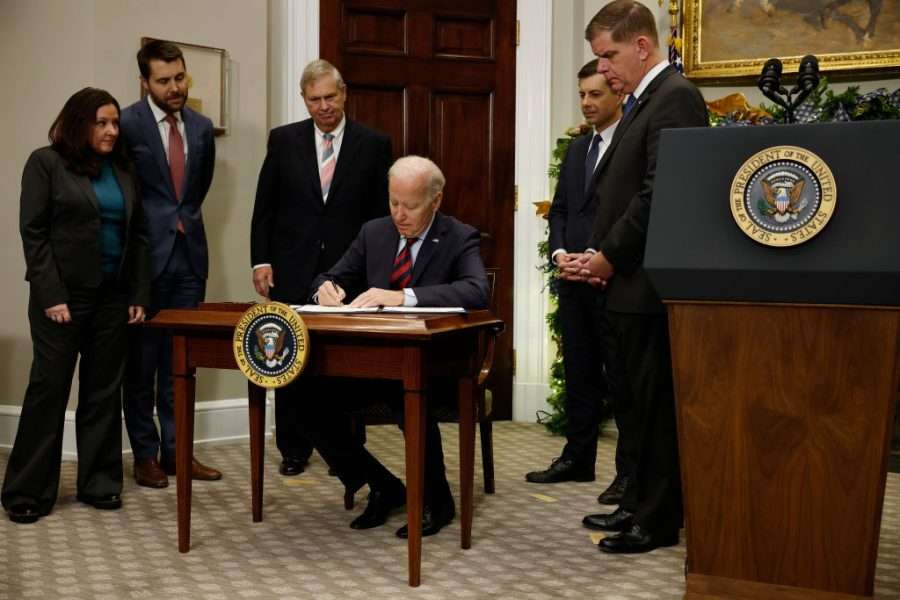 Beyond the rhetoric of liberal politicians and the complexities of congressional sausage-making, one fact should not be forgotten: it was the Democratic leadership — not Republicans — who spearheaded last week’s efforts to trample on the rights of workers.

Last week, the self-described “most pro-labor president in American history” spearheaded an effort to prevent more than one hundred thousand workers employed on the country’s railways from going on strike for better job conditions. That effort, supported by both senior Democratic leaders and most Republicans in the House and Senate, was successful. As a result, Congress has now imposed a contract on workers without any paid sick time — the key demand of the unions involved in the dispute. This intervention was exactly what corporate America wanted and, as ever, corporate America got its way. Workers will thus continue to toil through shifts that can run as long as eighty hours, remaining unable to take time off even in cases of emergency, with many expected to be on call for all or most of the day when not on the clock. It’s an absolutely wretched and indefensible state of affairs. It’s also the outcome that Joe Biden and other powerful Democrats wanted and actively sought.

These are the basic and incontrovertible facts of last week’s developments. But, owing among other things to the particularly cynical line that has been taken by Democratic leaders, these facts are apparently being lost on some. In a sense, that’s perfectly understandable. Most people, after all, have neither the time nor the inclination to follow the granular details of a particular story in Congress. And, if you’re an average news consumer who is generally inclined toward the Democratic Party, you’re liable to have seen and/or heard the following about recent events: first, that most Democrats in the House and Senate voted for railworkers to get seven days of paid sick leave; second, that President Biden and other key Democrats support the railworkers’ demand; and third, that all but a few Republicans in Congress voted against the idea.

Each of these things is strictly true and has been emphasized in various statements by figures like Biden (“[workers will get paid sick days] as soon as I can convince Republicans to see the light”), outgoing House Leader Nancy Pelosi (“As we consider Congressional action, we must recognize that railroads have been selling out to Wall Street to boost their bottom lines, making obscene profits while demanding more and more from railroad workers”), and Transportation Secretary Pete Buttigieg (“The position of our administration is that every American worker ought to have paid leave”). Faced with these facts, it’s quite easy to see how a casual observer might conclude that the only obstacle to paid sick time for more than one hundred thousand railworkers is the obstinacy of congressional Republicans.

What this picture critically omits, however, is that it was Biden’s White House that originally set last week’s events in motion. On Monday, Biden’s office released a statement calling on Congress “to pass legislation immediately to adopt the Tentative Agreement between railroad workers and operators — without any modifications or delay — to avert a potentially crippling national rail shutdown.” Touting “a historic 24% pay raise for rail workers” (a raise it neglected to mention will be spread out over five years), the statement contained only a cursory acknowledgement of the issue of paid sick time. Moreover, to underscore its central point, it also included the following:

“Some in Congress want to modify the deal to either improve it for labor or for management. However well-intentioned, any changes would risk delay and a debilitating shutdown. The agreement was reached in good faith by both sides.”

The White House thus initially opposed any attempt to include paid sick days in the contract it was hell-bent on imposing. Facing a backlash, Nancy Pelosi soon after announced the dual votes that ultimately took place: one, on imposition of the tentative agreement, and another on the insertion of seven days of paid sick time. Pelosi did so knowing full well that the latter would never get the necessary support to pass in the Senate. Had she and Biden actually been serious about trying to win railworkers their sick days, she could have refused to decouple the two issues and tried to rustle up the votes to avoid a strike and score a victory for workers at the same time.

That option, of course, might not have succeeded. Even with the genuine threat of a nationwide rail strike, Republicans and (very likely) many Democrats as well could well have refused to give any ground — thus compelling workers to go on strike. This underscores another important truth in all of this, which is that Biden and the Democrats could simply have refrained from doing anything at all and instead hammered away at the message that the railway companies’ refusal to grant basic dignity to workers was risking a disruptive shutdown only weeks before Christmas.

The course they ultimately chose was a very different one, because their sole imperative was preventing a strike whether the people who run America’s railroads have basic dignity or not. Confronted with the all-important question “Which side are you on?”, senior Democrats aligned themselves, and the federal government, with CEOs and shareholders while hanging workers out to dry — and no amount of partisan spin can alter or obscure that fact.