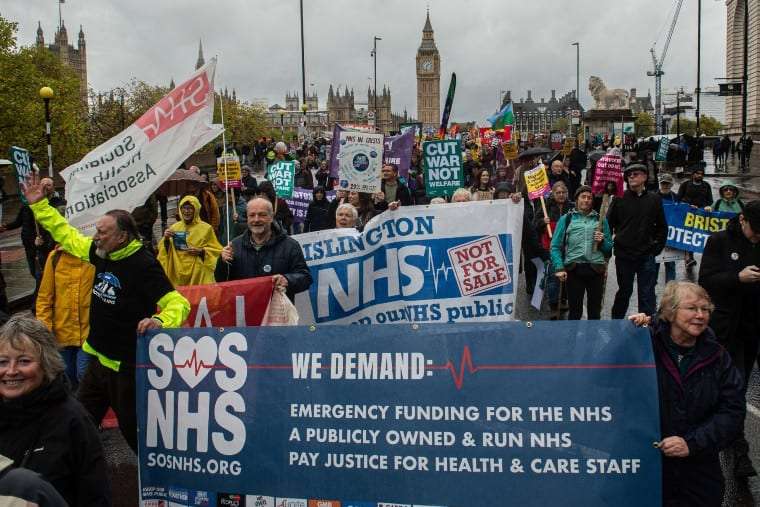 On the march for the NHS at the People’s Assembly demonstration last month (Picture: Guy Smallman)

Nurses and ambulance workers preparing to strike this month are on the front line of the fight for decent pay—and to defend the NHS. Only a pay rise well above inflation can hope to stop Tory plans to run the health service into the ground.

The number of unfilled NHS jobs rose to an all-time high of 133,446 full time equivalent posts last week.  The grim statistic puts every patient in danger and every worker under more pressure.

Meanwhile, Tory plans to recruit thousands of extra doctors and nurses have turned to dust, with ministers now admitting their target numbers cannot be met. To add insult to injury, top Tory Nadhim Zahawi last weekend dared to tell health ­workers they would be ­helping Russia’s Vladimir Putin if they went ahead with planned strikes.

The multi-millionaire Conservative Party chairman said the whole country had to present a united front over the war in Ukraine and that striking workers are wrecking his plan. “It is deplorable to use NHS staff as pawns in their war games,” said Pauline, a mental health nurse in Scotland.

“They want to deflect their own involvement in escalating the war onto hard working nursing and NHS staff.” And, Pauline told Socialist Worker, the strikes are part of defending the NHS.

“When wages don’t reflect the expertise and are below inflation every year, it’s impossible to retain and recruit staff. Some of those roles take four years training before they can start work. “Low staffing is ­dangerous, and it’s demoralising. “It means the standard of care we want to provide cannot be reached.

“That can means people dying because lack of trained staff means they cannot get the right care.” The GMB and Unison unions last week announced that they had won strike votes at many ambulance ­employers across England and Wales. While nurses expect to be on picket lines on Thursday 15, and Tuesday 20 December, Unison ambulance ­workers are set to strike on Wednesday 21 December.

The union has since announced it will reballot workers for strikes at a ­further eight employers, most of which are ambulance ­services.  It should reballot any group of workers who want such a vote. Despite ministers’ tough talk on NHS pay, there are signs that the government is trying to pull leaders of the nurses’ RCN union into ­informal negotiations.

They know that the sight of nurses and ambulance workers on picket lines a week before Christmas would mean further political ­disaster for them. Polls already show that more than half the public supports nurses on strike.

And, with the Tories ­languishing 15 to 25 ­percentage points behind Labour, hard-hitting strikes could sink them. Despite this, RCN ­leaders have hinted that a deal to avert action might be reached if the government was to offer a deal similar to that ­presented in Scotland.

But the Scottish offer is terrible for all health ­workers, especially for nursing grades. The Scottish RCN put the revised offer out for ­consultation this week, despite knowing it was barely an improvement.

The RCN’s claim is for a rise of 5 percent above inflation. That means the only deal its leaders should be considering is one that gives nurses a rise of around 20 percent. This is no time for unions to offer concessions.

Instead, the whole trade union movement should help turn the battles in the health service into a fight for everyone.  There should be walkouts, big delegations to pickets and solidarity rallies to boost the strikes.

Every picket line should see wave after wave of solidarity from workers in the NHS and from far beyond it. And, rather than ­crossing each others’ picket lines, all health workers should stand together in a show of solidarity.