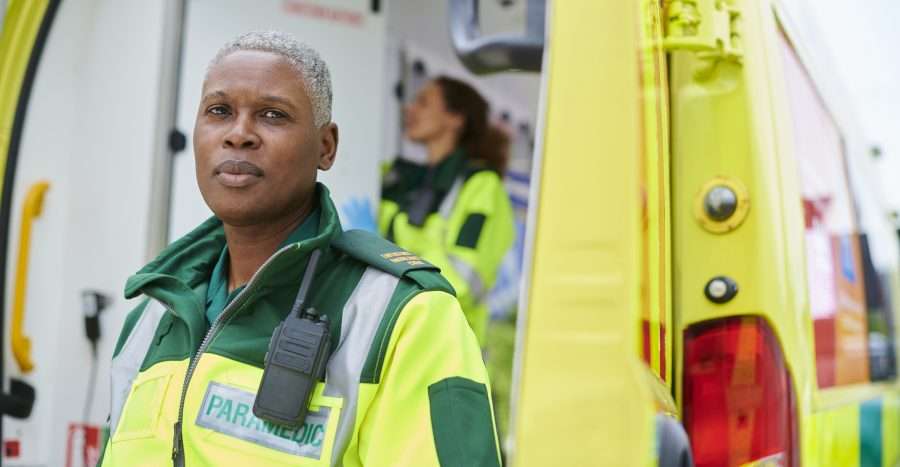 In the coming weeks, media pundits and government ministers will tell us healthcare workers shouldn’t strike if they care about patients. The truth is that workers are striking to keep the NHS their patients depend on alive.

We are now in a situation where the emergency services are incapable of meeting even an ordinary level of demand. (sturti / Getty Images)

Health workers are preparing to strike later this month. This is a moment at which we all must understand why and how the NHS is being deliberately set up to fail, oppose its destruction, and devise a programme that will reverse its decline for future generations.

Before the NHS and the welfare state were founded, the amelioration of poverty and ill health was in the hands of the charities and churches. Neither could possibly meet the demands that arose in in a largely unregulated and brutal modern capitalist economy—so many were left to die in hunger, filth, pain, and agony. This is why the labour and trade union movement fought so hard for social provision, which led to the foundation of the welfare state and the NHS itself.

But now, decades of cuts, restructuring, and privatisation have slashed or destroyed free, accessible services, pushing those who can to pay for private healthcare, increasing demand for the charity sector to plug gaps, and leaving the vast majority dependent on NHS services slowly being strangled by the Tories. Until we come to terms with what privatisation in the NHS really means, it will continue to devastate the lives of working-class people.

Most NHS trusts will be repaying £55 billion until 2050 for the PFI deals they were pushed into by Blair and Brown. For some trusts this can be up to a sixth of the entire budget. The financial and human costs inherent in outsourcing is also damaging services in the NHS and the wellbeing of the workers unfortunate enough to be TUPE-transferred out.

As a whole, this means huge proportions of the healthcare budget go nowhere near vital frontline services. Instead, they go into the profits of the private sector, while ‘efficiency’ savings leave patients and staff deprived of what they need.

The NHS was once the cheapest, most efficient, and most effective healthcare system in the world. Even just twelve years ago, following decades of deliberate efforts to undermine it, patients could still get care and treatment in A+E and a timely appointment with their GP. It was a safe and comprehensive service.

When I worked as a staff nurse in the Whittington casualty department in the mid-nineties, for example, we had an effective triage system: every patient was thoroughly assessed, in person, by a competent clinician. Many lives were saved by skilled and experienced paramedics, in the home, on the street in the backs of ambulances, and even as patients were being rushed through the doors of Casualty.

But politicians in league with the privatisers dreamed up the myth that people were misusing A+E services in order to reduce or close these services in hospitals throughout the country. We are now in a situation where the emergency services are incapable of meeting even an ordinary level of demand. Patients spend hours in the backs of ambulances, if they can get one at all, because there are not enough beds or staff members in an NHS that has been hollowed out by cuts and privatisation.

The public, meanwhile, have been given the dangerous advice to avoid A+E completely and go to their local pharmacy, but this advice is only suitable for relatively healthy adults with minor ailments. Seven million patients stuck on waiting lists have complex health conditions that can’t be cured by pharmacies, wellbeing apps, or searches on Google.

At the same time, the NHS waiting list is being used as an advertising tool by the management of some private hospitals set to cash in from an upsurge in ‘self-pay’. Private insurance companies are also on track to get a cash windfall as desperate patients opt to go private rather than suffer and die in the time it takes to access NHS treatment.

The demoralisation of all categories of NHS staff goes hand in hand with the privatisation agenda. Instead of being paid to train, student nurses now amass a mountain of debt while they’re used to plug staffing vacancies on the wards. Experienced staff are leaving the NHS because despite their high skill level, their pay has been deliberately pushed down by years of real terms pay cuts. In August 2022 the NHS vacancy rate was 59.1% higher than pre-pandemic levels.

Staff have now voted in record numbers to take strike action to protect what is left of the NHS. The first wave will take place this month, and we all must stand shoulder to shoulder with the pickets in front of hospitals and ambulance stations. We must be clear and unequivocal in our demands for inflation-busting pay restoration for these staff, and resolutely oppose privatisation in all its guises.

Cynical commentators and government ministers will try to pin the blame on striking NHS staff for the service delays that are costing lives. But there are no strikes in the NHS yet. Instead, patients, including young children like Yusuf Ahmed, are dying because government policy is shutting the doors of the NHS in their faces. The impact of coordinated strike days in the NHS can in no way compare with the impact of decades of cuts and privatisation—which, if left unchecked, will ultimately destroy free healthcare in this country.

In reality, union members working in the NHS and ambulance trusts are dedicated to their work. They care deeply about the welfare of their patients, who they know are at the mercy of a crumbling health service. Daily they see the neglect, the premature deaths, the elderly and infirm stuck for hours in ambulances because the entire system is blocked.

They are desperate for the government to hear their voices. Many cannot face another day working long hours in gruelling conditions, at the end of which they can’t afford to put the heating on or feed their families. Workers want proper investment in wages, terms, and conditions so that they and their colleagues can afford to keep working in the NHS.

These strikers are the remaining staff, who, despite it all, have stayed. There can be no free healthcare for any of us if they can’t afford to remain in their posts to deliver it. The entire labour and trade union movement must mobilise to support these strikers because the outcome of this battle is, quite literally, a matter of life and death.