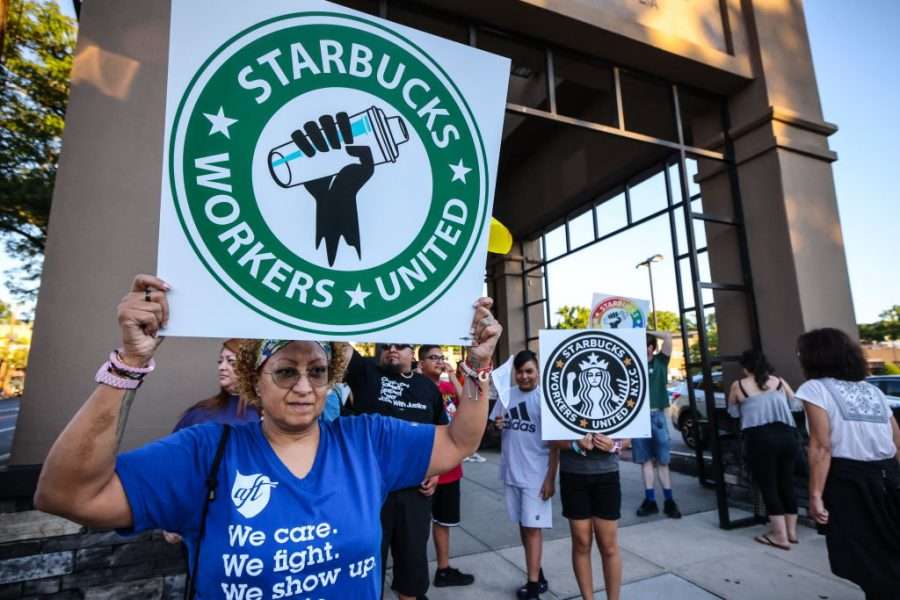 For the fifth time, the Starbucks Workers United campaign has filed charges against their employer for illegal firings of union supporters, claiming Starbucks has repeatedly violated labor law in its attempts to destroy the fledgling union.

“Starbucks needs to stop — hopefully this lawsuit will help,” says Joselyn Chuquillanqui, a former worker at Starbucks in Great Neck, New York. Chuquillanqui was fired on July 27, and she says it was in retaliation for her union organizing with her coworkers.

The Brooklyn office of the National Labor Relations Board (NLRB) filed a request at federal court last Wednesday seeking to force Starbucks to restore her to her job. It also asked the court to order the company to cease and desist from over twenty distinct union-busting activities at her store.

“Injunctions are one of the most important tools available to effectively enforce the National Labor Relations Act,” said NLRB general counsel Jennifer Abruzzo in an email. “Effective enforcement requires that we timely protect employees’ . . . right to exercise their free choice regarding engaging in union and protected concerted activities, including organizing and collective bargaining.”

Starbucks fired Chuquillanqui some time after she had led a thwarted effort to unionize her store in Great Neck, where Starbucks Workers United (SBWU) lost the union vote six to five.

The NLRB’s request for a court injunction is the fifth such effort on behalf of fired Starbucks employees whom the board argues were retaliated against for union activities. The requests for injunctions have covered seventeen workers, including Chuquillanqui, who were fired. The $119 billion company has fired about two hundred Starbucks Workers United baristas since the union drive began in earnest last year.

The company’s retaliatory campaign has made numerous steps to slow the union drive to a halt after an exponential increase in the number of stores filing to unionize late last winter and into the spring following a successful drive at the Elmwood location in Buffalo, New York, where SBWU won its first election last year on December 9.

Beyond firings, the anti-union assault since then has included providing new, better benefits and quicker raises to nonunion stores and unilateral changes to requirements for worker availability. Starbucks has placed hostile managers in stores including one in Boston, who provoked a nine-week strike, and another in South Carolina, who accused workers of kidnapping and assault during a march on the boss.

In one New York store, Starbucks workers accused the company of refusing to adequately address health and safety issues like black mold and bedbugs, again leading workers to go on strike. The company, vaunted for its trans-supportive health care, has also used the very benefits it offers as a weapon with which to threaten trans workers. In some places, including Ithaca and Seattle, it has closed stores entirely.

Starbucks Workers United says the company has refused to bargain in good faith with the approximately two hundred sixty union stores, at first simply not even sitting down at the table and then walking out of negotiations after minutes.

Workers say the company has tried to demoralize them on a day-to-day basis with a broad range of tactics, such as refusing to reduce workload during extraordinarily busy periods on shifts. These tactics appear to be at the heart of Starbucks’s anti-union strategy, regardless of whether its eventual goal is to decertify the unions, wait for a more favorable NLRB under a Republican president, or something else entirely.

Importantly, the NLRB, as the federal agency charged with ensuring workers have a right to form unions under the National Labor Relations Act, has pushed back against the company under the leadership of Abruzzo.

This isn’t always the case with the NLRB, as different presidential administrations compose its leadership in different ways. But under Joe Biden, the agency has been aggressive by US standards in supporting the process that allows workers to unionize. For example, the board ruled that individual stores could unionize rather than forcing Workers United, the parent union of Starbucks Workers United, to organize multiple stores at once.

Without such a step, the SBWU campaign likely would have been completely crushed in its inception in Buffalo. The company had put such intense pressure on workers by, for example, hauling in managers from across the country to undermine organizing in stores, that it would have been unlikely that the union could have won an election across an entire district — what Starbucks counted on in making its argument for district-wide elections.

Similarly, the numerous rulings and attempts to enforce injunctions the board has issued have led to steps to ensure fairness in the Starbucks union drive.

The latest attempt at an injunction, like several others before it, calls for a cease and desist order against Starbucks. Last month, in one such request for an injunction, the NLRB’s Michigan office escalated its efforts by asking for a nationwide order to stop the company from retaliatory moves like firings over union activity.

But the NLRB has limited powers to actually force a company to do anything. One of its particular limitations is the amount of time it takes for claims of unfair labor practices (ULPs, a charge workers can bring against their bosses) carried out by companies to be addressed. This is one of the major reasons the board seeks to go to the courts, to speed things up.

And the cash-strapped, underfunded agency must spend enormous amounts of resources to engage in litigation like seeking an injunction — a situation that companies like Starbucks depend on as they seek to delay and ultimately defeat the right to organize.

Separate from whether Starbucks will succeed in using the board’s resource limits as a wedge in its brute force campaign against the baristas is also the question of how union busting is best dealt with. Do processes like filing ULPs and seeking wins in court make workers feel more or less empowered, leave the movement more or less invigorated?

In contrast to tactics that primarily rely on lawyers and courts, more recently, Starbucks Workers United turned to a nationally coordinated strike on one of the company’s busiest days, a very different strategy than SBWU has relied on for most of the last year, despite frequent store-level work stoppages and some regional actions.

Questions over tactics will likely define the success or failure of the campaign moving forward. For now, workers like Chuquillanqui are benefiting from having, in the NLRB, a fair referee for their organizing drive.