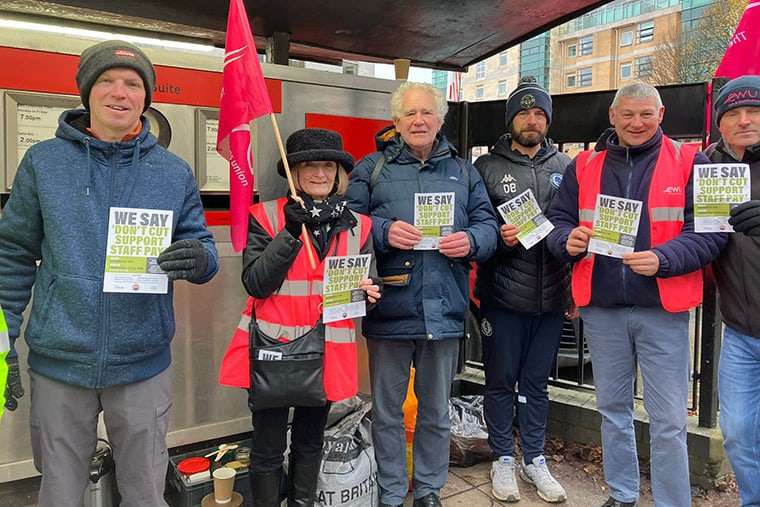 Over 70 people attended a public meeting in York last week to try to prevent a local Multi Academy Trust imposing a huge pay cut on 43 teaching assistants (TA) within its six schools.

The Southbank Multi Academy Trust is trying to change their contracts from being 52 weeks to term time only. This represents a loss of thousands of pounds to some of the lowest paid workers in the schools during a cost of living crisis.

One TA pointed out that bills were not term time only. Staff have been told if they do not accept these new terms they will be dismissed. This is fire and rehire P&O ferries style in a school.

Parents who attended the meeting were dismayed that the people who work on the frontline and support their children day to day, were being treated in this way. Many have already signed an online petition and they said they would continue to support the staff in any way they could.

Michael Kearney, an NEU union rep who spoke on the panel, called for the newly appointed CEO who is on a six figure salary to resign. His wages could then be used to plug the funding gap the MAT claims to have.

Many in the room pointed to the fact that academies were run as businesses as being at the root of the attack, increasingly money is funnelled towards the central team who earn inflated salaries.

Government workers in the transport and agriculture departments are set to kick off a month of rolling strikes in the civil service from Tuesday of next week.

The strikes, by members of the PCS union, are the first walkouts in a fight over pay and pensions, after 100,000 workers voted to strike.

Government bosses want workers to accept a pay increase of just 2 percent—a huge real-terms pay cut. Sections of workers in the Driver and Vehicle Standards Agency (DVSA) and the Department for Environment and Rural Affairs were set to be the first out on Tuesday.

The action involves workers at DVSA workplaces across Scotland and north east England, as well as call centre workers in the Rural Payments Agency (RPA).

The PCS says it will give strike pay equal to full wages for all those taking action. DVSA strikers will include call centre staff and enforcement officers, hitting the government’s ability to regulate haulage during the holiday period.

Meanwhile, the RPA strike is aimed at stalling farmers’ applications for subsidy payments at a peak time. The strikes should be a focus for every worker and activist. PCS branches not on strike should organise solidarity visits to the picket line to involve as many members as possible in the action.

This is essential to make sure workers not on strike are still involved in the action—and to win an argument for much harder-hitting action by all those who voted to strike.

For a list of DVSA workplaces on strike go here RPA strikes are in Newcastle Upon Tyne, Workington in Cumbria, and Caernarfon in north Wales.

On the Shelter strike picket line in Sheffield on Monday

Shelter pay is so low that staff can’t afford rent

Over 600 workers at homelessness charity Shelter are striking for two weeks. Management offered a one-off payment and 4 percent pay increase until April 2024.

The low pay means staff themselves are left unable to pay rent—and face being homeless. Strikes began on Monday of this week and will continue until next Friday.

The 75 engineers at GE Steam Power in Rugby have accepted a pay deal after beginning strikes in February. They’re each receiving one-off payments totalling £15,000 to cover changes in conditions.

A source said, “We started with one day per week strike followed by all out strike from August.

“In October management cancelled all future meetings but we continued with the strike and then returned to work while we won a reballot to go out again on indefinite strike from Monday 28 November.” The deal includes payment equivalent to a 12.4 percent pay rise.

Unite union members who work at 11 airports in the Highlands and Islands have voted by 74 percent in favour of strikes after a 5 percent pay offer.

HIAL is a private company fully owned by the Scottish government.

Workers at Mizkan in Rochdale are putting bosses in a pickle as strikes continue for the 50 Unite union members. They announced 13 more dates after carrying out 19 days of action since October.

The extra 13 days began last Thursday and Friday. Strikes are set this week for Monday until Saturday and next Monday until Friday. The workers who make pickled vegetables and vinegar rejected a 5 percent pay offer.

The workers were not told they were crossing a picket line. The strikes are continuing at the weekends in the run-up to Christmas.