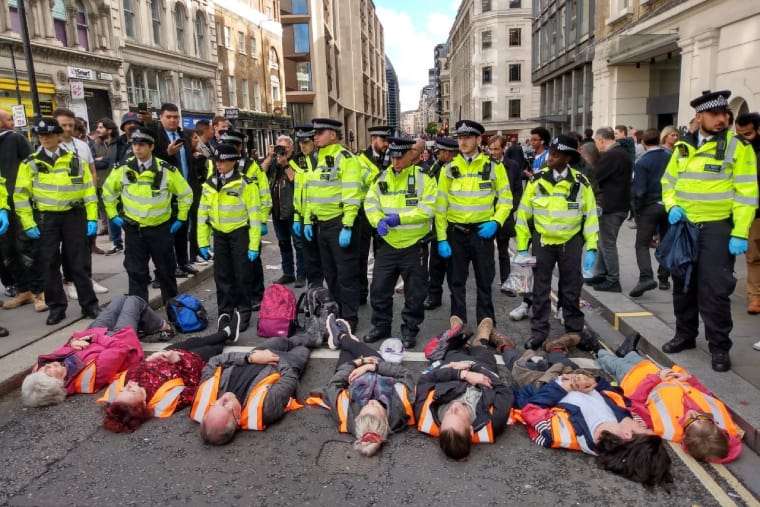 The state is stepping up the repression of climate activists. Some 28 people, who are part of Just Stop Oil (JSO) and other climate groups, were locked up in Britain’s prison system as of Tuesday.

Louis McKechnie is one of them. The JSO activist has been inside since 5 July, after tying himself to a goalpost at a Premier League football game and participating in other actions. His case is expected to be heard in February next year, meaning he will have spent over six months in prison without trial.

Speaking from HMP Peterborough, Louis told Socialist Worker, “The first few weeks in prison are very difficult. But before long the 22 hours a day in a cell stopped affecting me so much. I’m very fortunate that I’ve lots of people to call and write to, which keeps me in good spirits. Most prisoners aren’t so fortunate.

“The other prisoners have been kind and welcoming to me. But due to negligence and the profit incentive for the prison—which avoids rehabilitation—many prisoners struggle with mental health difficulties.

“Prisoners make 30 to 50p per hour for their labour, which is barely enough to get by. Many jobs are for profit alone, such as prisoners working in call centres to sell electricity and gas for Shell.”

Louis explained why he felt that taking part in direct action was the only way forward—even if it led to his imprisonment. “For the last 30 years we have tried every other method available to us,” he said. “The political system is gridlocked, and our leaders have failed us.

“We don’t have time to wait anymore. We don’t have the luxury to not engage in what is most effective just because it can be perceived as annoying.”

Louis explained that, in the face of harsh state repression, JSO and other climate groups must stay resolute. “Recently we have seen the government come down harder and harder on us,” he said. “They have been remanding people with no prior convictions and without evidence. The number of political prisoners for climate protests is rising.

“Sentencing is getting exponentially harsher, and it feels like every day I hear another friend has been sent to prison. If this is meant to discourage us, it seems to have the opposite effect.”

On Monday of last week, seven Extinction Rebellion supporters were found guilty of criminal damage after cracking the windows of Barclays bank HQ in Canary Wharf, London, in 2021. The maximum penalty the seven could face is 18 months in prison.

After the trial, defendant Zoe Cohen said, “After these ten days, it is even more obvious to me that our establishment is in total denial. And that the law as it currently stands is utterly unable to protect us.

“It is the real criminals —the banks and corporations causing and enabling this catastrophe—that should be in the dock.”

Just last week, Jan Goodey, who climbed on top of a gantry over the M25 motorway in west London, was sentenced to six months in prison. He became the first climate activist to be sentenced under the Tories’ Police, Crime, Sentencing and Courts Act.

The harsh sentencing and imprisonment of climate activists should be a warning to the whole workers’ movement.

The Tories’ crackdown on protesters won’t stop with climate activists. They will push through new laws, including the Public Order Bill, to persecute workers, break strikes and stop protest.

Every trade unionist, activist and campaigner must rage against the Tories’ crackdown on JSO and other climate groups—now is not the time to sit on the fence.