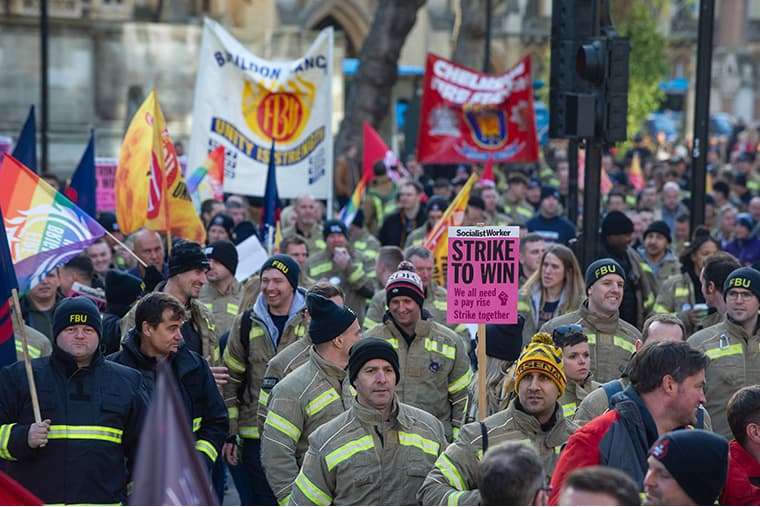 Firefighters in the FBU union held a march and rally in London on Tuesday to launch their pay strike ballot. The Tories want to stop the strike wave with more anti-union laws (Picture: Guy Smallman)

Rishi Sunak has confirmed the government is ready to ram through new anti-strike laws. But Labour Party leaders won’t commit to repeal them if the Tories pass them.

On Wednesday the prime minister told MPs he was ready to bring forward fresh assaults unless workers back off from “unreasonable” pay demands. Sunak said that he had been “working for new tough laws to protect people from this disruption.”

The government has already started the process to pass a new law implementing minimum service levels during transport strikes. They mean that during strikes unions have to guarantee that most services will still run.

In some European countries, where similar laws exist, unions must maintain a full rail service from 6.30am to 9.30am and 4pm to 7pm. And they have to run 25 percent of the service the rest of the time. That’s gutting the right to strike.

The prime minister’s official spokesperson said on Wednesday that work was “ongoing” on other options for mitigating future industrial action. He refused to rule out a ban on walkouts by ambulance staff and other emergency workers. Nor did he rule out the extension of proposed minimum service level legislation to cover the whole public sector.

But some Tories and right wing newspapers think the government isn’t moving fast enough or hard enough. “Liz Truss said she’d have this done within 30 days of becoming prime minister. We are now at a point well past that,” said Chris Loder, a Tory member of the MPs’ transport select committee.

“There are questions about the deliverability of this legislation. But if the government is going to do this they need to crack on.”

The government has already brought in a law allowing the free use of agency workers to scab on strikes. This is already being used quite widely—with no serious resistance from union leaders.

But the Tories have held back from implementing other new laws so far. They are worried that they could spark an even wider revolt than the present strike wave. And attacking the unions could undermine the ability of union leaders to police the surge of anger form below.

On the same day that Sunak talked about new laws, transport secretary Mark Harper told a committee of MPs that this was only a longer-term issue. “It’s clearly not going to be something that’s going to help with the industrial action that we face today,” he said.

Meanwhile, Labour is no shield against the attacks. Asked what action Labour would take on strike laws, a spokesperson told reporters the party would repeal the “archaic” 2016 laws brought in under the Tories.

She said, “We would repeal the 2016 Trade Union Act. There are unnecessary elements in trade union legislation that we would look at. One example would be allowing online balloting.”

Pressed on the proposals from Sunak, the spokesperson said, “We think minimum service legislation would be unworkable.” But she said that, as the laws had not yet been brought in, the party could not commit to repealing them.

“Public sector workers would love to be able to deliver minimum service levels. But 12 years of Conservative cuts and mismanagement have left our public services falling apart at the seams.”

That’s not exactly a call to arms against new laws. The stakes around the present strikes go higher all the time. Strikers have to pressure union leaders not to back off, and to force escalation of the strikes. For example, in Royal Mail where bosses are openly on the attack, the union has to move to all-out action. And the more than half a million workers who have now voted for strikes should come out together.

Royal Mail’s strikers’ rally, called by the CWU union, Friday 9 December, Parliament Square, London, SW1P 3BD from 1pm to 3pm. The CWU London division has called for strikers and supporters to gather at 10.30am at Mount Pleasant sorting office to march to Parliament Square.