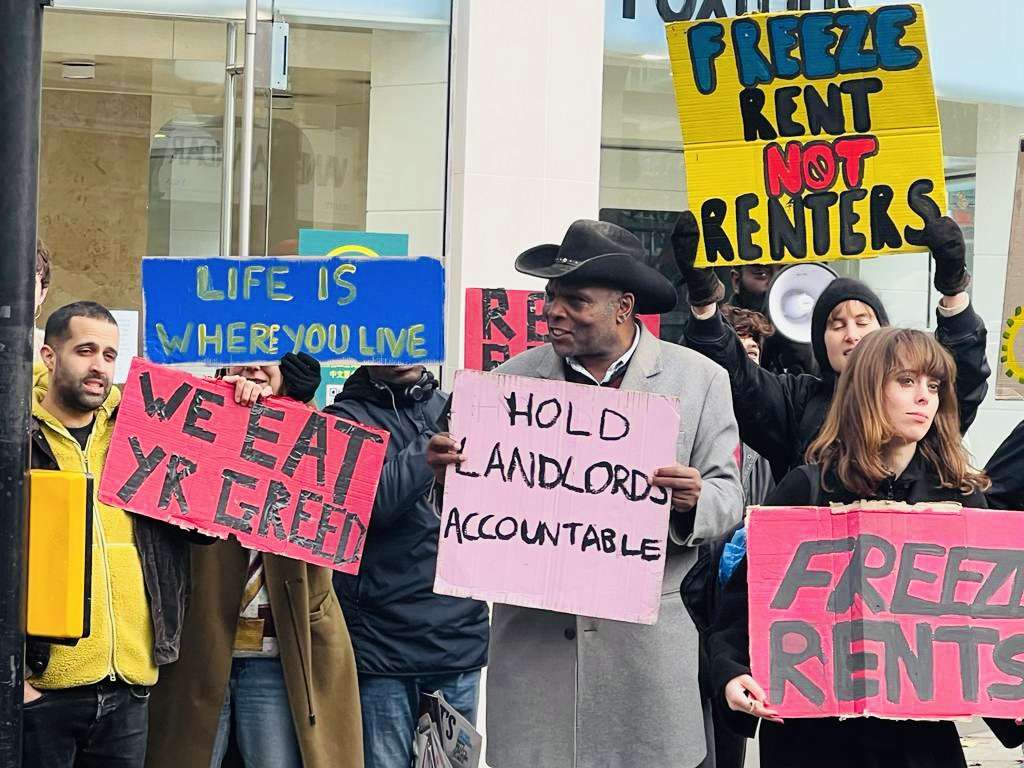 On Saturday 3 December, London Renters Union (LRU) and Greater Manchester Tenants Union (GMTU) organised protests against some of the largest estate agents in England as part of a campaign calling for an immediate rent freeze. rs21 members report.

Recently, LRU members reported an average rent increase of 20.5% a year – an average rise in cost of £3,378 for private renters. In many cases, members are facing rent increases above 50%, as landlords attempt to extract as much money as possible from their tenants. At the same time, major London estate agent Foxtons reported a 25% increase in revenues off the back of skyrocketing rents. CEO at the time Nicholas Budden was handed £1.6 million in pay – around £30k a week. While 39% of landlords have no debt on their properties, landlords are exploiting the cost of living crisis as an excuse to hike rents well above incomes.

Action in London and Manchester

There were actions in six London boroughs led by LRU, focused on particularly egregious estate agents reporting massive profits – Winkworth and Foxtons. Both these companies profit from encouraging landlords to raise rents, often through regular eviction and replacement of their tenants, as well as facilitating the mass purchase of properties by buy-to-let landlords.

In Newham, LRU members, highlighting rising homelessness due to landlordism, brought a mattress, moving boxes, and tents to the local Stratford Foxtons branch. Outside, there were impassioned speeches from members facing rent rises, as well as housing-themed festive carols sung.

In Haringey, a LRU member posed as a Foxtons employee and was placed in a set of stocks. Tower Hamlets branch came to find that the estate agents had shut up shop, out of fear of being exposed for their profiteering. In Hackney, LRU members succeeded in dropping a ‘freeze rent not renters’ banner from the top of a Foxtons office. Along with actions in Brent and Lewisham, hundreds of renters mobilised in unique and entertaining ways to expose the rapaciousness of landlordism and build the campaign for a rent freeze.

GMTU highlighted the many issues their members living in Thornley Groves-managed properties had faced, from rent hikes to the use of dodgy ‘nil deposit’ schemes. In these schemes, tenants pay a non-refundable fee at the start of the tenancy and continuous fees throughout, and yet still might owe more at the end of tenancy if landlords challenge the state of the property. These schemes are presented as a tenant-friendly choice to reduce the cost of deposits, but when investigated, appear more as a way of getting around laws around deposit protection and charging unlawful fees.

Rent is one of the significant rising costs in the unfolding economic crisis, with landlords increasingly using this as an opportunity to extract maximum rent from tenants. These actions are hopefully the start of a wider series of actions targeting the landlord class. With the campaigning of Living Rent securing a rent freeze in Scotland, it is hoped that something similar can be built in England and Wales.

For now, LRU have released a page where rent rises can be reported, as well as providing resources to help tenants negotiate rent rises. GMTU have won member solidarity cases to prevent rent rises during the cost of living crisis. With renters increasingly joining organisations like LRU and GMTU, a movement can be built to transform the housing system, and win a rent freeze in the near future.