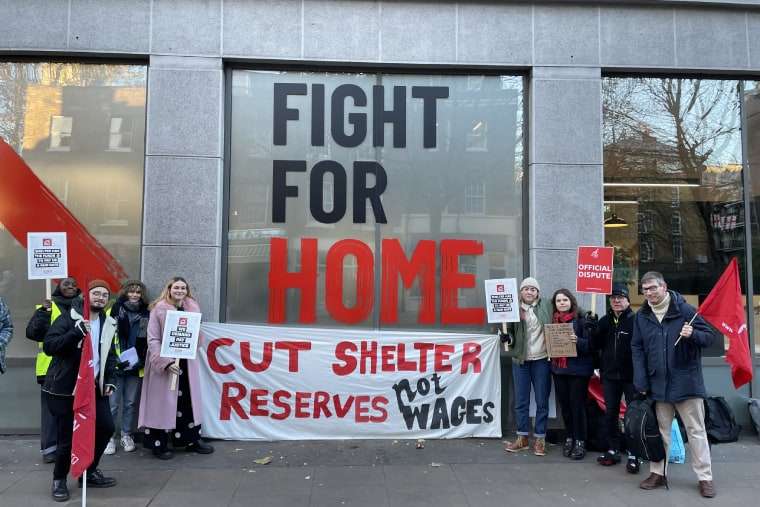 On the Shelter picket line in Old Street, London

Workers at housing charity Shelter are so poorly paid that some worry whether they can keep a roof over their heads.

No wonder that around 600 of them began two weeks of strikes on Monday in the fight for a pay rise that at least matches inflation.

On the picket line in Old Street, strikers chanted, “Three percent won’t pay the rent” while car horns beeped in support—and at the “Honk if you’re not paid enough” sign.

The strikers are using their campaigning skills to run the picket—with a book swap group, tactics meetings, and teach-outs. A rally was also planned on Friday with other Shelter strikers in London and charity workers, who will then march to the CWU union rally.

Strikers have set up local and national strike committees to direct the strike and keep the pickets motivated—despite the cold weather.

Negotiations with management began in the spring after they imposed a 3 percent pay award for this year. Bosses offered one-off payments during negotiations, as well as a 4 percent pay rise for 2023-4.

But these were taken off the table in the days before the strike. Unite union rep Tarun told Socialist Worker on the Old Street picket, “We’re adamant that’s not good enough and the pie can be sliced up differently. Three percent is a really big real terms pay cut.”

Tarun said the first week of strikes has been “solid”. “The spirits are high—it’s a really positive atmosphere on the picket line. And we’ve had so much solidarity from the different groups of people, organisations and services out on strike at the moment.

“They’ve spoken at our rallies, and we’ll speak at theirs. It’s important we have this solidarity—for a lot of people here it’s new being on strike.”

Shelter provides crucial housing advice, as well as support to homeless people. Another striker, Sam told Socialist Worker, “It’s my first time experiencing anything like this. We’ve got some fantastic reps and people in the organisation who have been bringing everyone together.”

They added that it’s important to be out on strike “to show solidarity”. “There’s a lot of people in the organisation doing the most important stuff, like running the helplines, who are in a terrifying position with winter coming and bills going up.

“We heard from one person who is having a baby and doesn’t know if they could keep their house warm when the baby comes. People are using foodbanks and struggling to pay rent.

“We do an important job, but to do that we shouldn’t be using foodbanks or using our own services to get by. We’re not asking for much.”

Tarun added, “It’s simply not good enough for an organisation whose purpose it is to keep roofs over people’s heads to struggle to do that for their own staff.

“We can’t endlessly take pay cuts because we care about the jobs we do. If we can’t look after our staff, how can we look after those who we’re meant to be here to help?”

Shelter has £30 million in reserves—well above its reserves target of £8.9 million.

Tarun said, “We’re asking management to come back to the negotiation table. We’ve heard nothing from them all week. But we’re not intending to slow down—it’s not going to peter out.”

Sam said the strikers must now “keep morale up on the picket line”. “We want other charities who do amazing work like we do to know they’re worth it as well and they can win if they strike.

“It’s been asked multiple times, ‘What are you going to do if you don’t win?’ We’ve got to stay strong and show we’re willing to fight for a decent way of living.”

Sam is a pseudonym