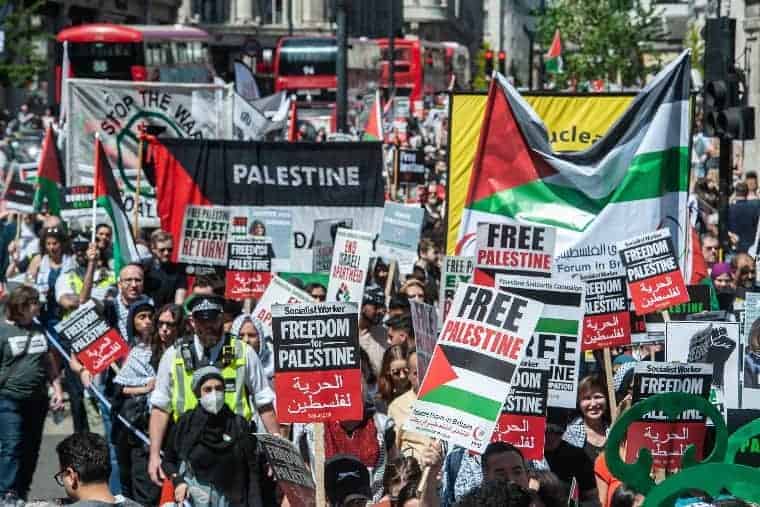 Protesters demand ‘Free Palestine’ in London in May of this year (Picture: Guy Smallman)

Long before 2022 reached its end, the United Nations declared it the “deadliest year” for Palestinians in the West Bank and East Jerusalem since 2005. That was at the end of October when, it said, Israeli forces had killed 121 Palestinians there, though a more comprehensive count by the Middle East Eye website claimed 130. Now, as Socialist Worker goes to press, it’s 164.

By the time you read this the figure will likely be even higher thanks to nightly Israeli raids on West Bank towns, neighbourhoods and villages. This is how Israel ends its year of heightened violence against Palestinians in the West Bank.

Alongside raids, there has been a rise in attacks on Palestinian villagers by Israeli settlers determined to force them from their land. And there has even been a weeks-long siege and blockade of a major Palestinian city, Nablus.

After a mass Palestinian uprising in 2021, Israel intensified its repression in the West Bank, where Palestinians have lived for more than 55 years under its military occupation. In the face of that repression, new armed brigades of young Palestinians,  ready to fight back, sprang up over the course of the year.

The fighters of the Nablus-based Lion’s Den, and the brigades of the Jenin refugee camps, look as if they could be the start of a new phase of Palestinian armed resistance. Adamant that it won’t give up any of the land, but  hating the fact that Palestinians live there, Israel instead opts for ever greater military occupation.

It’s designed to both maintain the subjugation of Palestinians and push them into increasingly smaller enclaves. And it looks set to get even more violent with a new right wing government in Israel likely still taking shape as Socialist Worker went to press.

Racist warmonger Binyamin Netanyahu was still settling some of the final deals designed to install him as the head of a new coalition government. After about a year and a half out of office, Netanyahu brought down an Israeli government this year by defeating it in a vote to renew military law in the West Bank.

The law is a key pillar of the Israeli occupation. It ensures that Israeli settlers enjoy the civilian legal system while Palestinians are subject to military law.

Normally, every Israeli party—left, centrist or right—votes to renew this every five years as they are all committed to the occupation. This time, Netanyahu’s Likud party refused in order to show that, without him, the government was incapable of protecting it.

He went on to win the following election with the backing of a coalition of right wing parties who talk openly of expelling Palestinians from the West Bank altogether. Now he’s putting their leaders in key positions of power. Itamar Ben-Gvir, a leader of the Religious Zionism group, recently hailed an Israeli soldier who executed an unarmed Palestinian in the street as a hero.

Now he looks set to be head of national security.  That’ll put him in charge of Israel’s police and—under planned extended powers—the so-called border police who operate in east Jerusalem and the West Bank.

His co-leader, Bezalel Smotrich, is rooted in Israel’s fanatical settlement movement. He’s likely to be put in charge of the Civil Administration, with powers to approve new settlements, demolish Palestinians’ homes and control their movement.

It’s a signal that 2023 could be deadlier still for Palestinians. But the rise of a new armed resistance also sets the stage for more explosive confrontations in the West Bank.