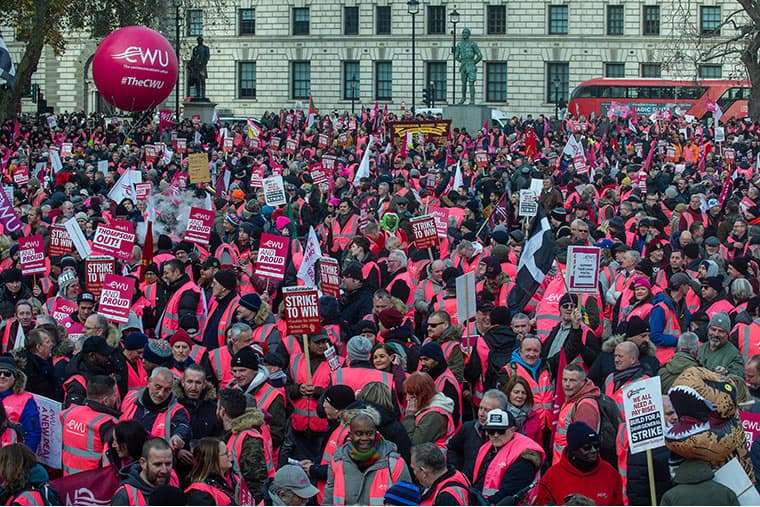 Tens of thousands of striking postal workers rallied in central London on Friday—coming together after almost six months of a battle to save the future of their jobs at Royal Mail. It showed a mood that exists wider than the specifics of any particular strike. Workers know ruthless bosses and the Tories are on the attack and many know they have to hit back harder.

The march underlined that, though bosses have so far refused to drop their plans to transform Royal Mail into a “gig-economy” style courier firm, workers are determined to keep fighting. The CWU said that “17,500 CWU members came to London”.

That’s one in six of those on strike—and others stayed to do picketing. As in other strikes, this shows how people are prepared to participate actively, if they are given the chance.

“It feels strong being here,” one striker in Parliament Square told Socialist Worker. “You’ve got to make a stand. There’s been a lot of suspensions, and a lot of bullying. But we’re showing we’re made of stronger stuff.”

Strikers from as far away as Scotland and Northern Ireland packed tight into Parliament Square for a rally, which got livelier and more upbeat as people kept arriving. Hundreds of workers from London had gathered at Royal Mail’s headquarters at the Mount Pleasant mail centre elsewhere in central London earlier that morning. They marched together to join the main rally.

And once the rally was done, all the workers together marched up to Buckingham Palace, taking over the road as they went. Cars, taxis and vans caught up in the march cheered and honked in support.

The march and rally also boosted many workers and gave them confidence that everyone was still strong after 13 strike days and almost six months in the fight.

“It’s good to see so many people here,” Lauren, a striker who’d travelled from Oxfordshire, told Socialist Worker. “It’s given us a bit of momentum and motivation.” Another striker, marching up to Buckingham Palace, said, “This is fantastic. We’ve been attacked and bullied, and this refreshes us. It will inspire people I think.”

Yet for all the power of the strike so far, bosses still show no signs of retreating. CWU union leaders met with Royal Mail managers, including chief executive Simon Thompson, for talks on Tuesday, Wednesday and Thursday.

But in a video message to workers on Thursday CWU leaders Dave Ward and Andy Furey said the talks felt like “One step forward, two steps back.” “You feel there’s a light at the end of the tunnel at one point, at other occasions it can feel frustrating,” said Furey.

Strikes—who’s out and when
Read More

The union leaders appear to have moved from talking about their own alternative vision for change, to trying to manage and negotiate on bosses’. Ward and Furey suggested on Thursday that they’d accept a below-inflation deal.

In return, they want Royal Mail to guarantee no compulsory redundancies until 2024, and allow union reps a say over local changes. That’s a retreat from when Ward, until recently, talked about trying to make the board adopt the union’s alternative business plan.

It shows the pitfalls in an approach based on making sure Royal Mail stays profitable for bosses and shareholders. Ward said on Thursday that union officials don’t go into talks “just making demands without recognising the position that the company is in.”

And Furey said, “If we were able to move forward onto a number of key areas including the guarantee of no compulsory redundancies, we said we would be able to support proper revisions, properly negotiated.

“We were prepared to work at pace to deliver those revisions.” But bosses have rejected even that. Now CWU leaders are preparing workers for further strikes in the new year.

Furey told workers at the rally that the union would hold a new strike ballot between January and February over job security, pay and change. And while workers say they’re starting to feel the hardship of striking, they’re also ready to keep going.

They know that losing would mean tens of thousands of redundancies, and the end of the job as they know it. “It looks like we will have to strike again, and maybe we will have to go out for longer,” Ben, who had travelled from South Yorkshire, told Socialist Worker.

“This boss isn’t budging. They’ve been in talks for weeks, and we only hear whispers, but it doesn’t seem like he’s moving. I don’t hope that we’ll go out for longer, but we will if it’s what we have to do.”

There was also a strong feeling that strikers wouldn’t back down until the nearly 80 CWU members and reps suspended for picket line activities were reinstated. Speaking to the rally, CWU North Wales and North West divisional rep Ian Taylor demanded that “Dave Ward does not put a pen to any deal until every single one of those reps is back at work.”

‘We’ve gone too far to give up now’

After a week in which strikes again became the focus of the news, lots of strikers on the march themselves raised the possibility of unity with other workers. “I think we will have to go into January,” said one worker from north London. “But I think it’s bigger—it’s a government-led thing.

“You have the firefighters maybe going out, the nurses going out, the buses out before us. We were all told that we were key workers. We all just want decent wages and to defend our jobs.”

And James, a striker from Tooting in south London, said, “I’m not politically inclined. But you can see there’s something gone seriously wrong in the past two years.

“Lots of people went into work during Covid. The health workers, the rail workers, the teachers all had to go in. Now look who’s up in arms.”

‘Strike to win’ was a popular slogan at the Royal Mail workers’ rally (Picture: Guy Smallman)

Leaders of other unions fighting pay battles, including Jo Grady of the university workers’ UCU, Kevin Courtney of the school workers’ NEU, and Mick Lynch of the rail workers’ RMT, spoke at the rally. The tens of thousands of strikers gave big cheers when they were asked if they’d support other workers on strike.

If they’re going to win, the postal workers will need to escalate their action, and stay out for more than one or two days at a time. That solidarity—and the feeling of fighting together that can come from united action between unions—can give them the confidence to do that, and turn the tide against Thompson.

“We’ve gone too far to give up now,” a striker from Walsall told Socialist Worker. “I’d rather let Royal Mail burn to the ground than give up now.

“It’s not just us. When you look at the teachers out, the rail workers out, the nurses out, something is going wrong. We need to stand together as the working class and say we won’t take any more.”

“It’s all about corporate greed,” Mars, another striker from Tooting said. “They say it’s about inflation, or the Russian invasion, and that’s why prices are going up and we can’t get a pay rise. These are all excuses they use to make a profit. We need everyone to strike together.”