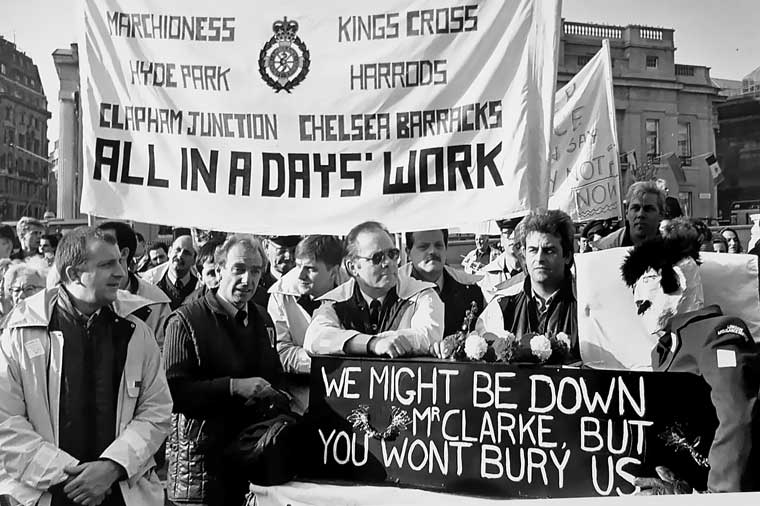 A stench hung heavy in the air during the hot summer of 1989 as Margaret Thatcher’s Tory regime started to decompose. Interest rates were rising and inflation soared past 8 percent. As rents and mortgages climbed, opinion polls showed Labour with a commanding lead for the first time that many people could remember.

After many sullen years, those that wanted to fight back sensed this was their moment. Workers ­launched ­prolonged strikes in local government and at the BBC. Soon it seemed that everyone was at it—from illegal ravers dancing in irate farmers’ fields, to poll tax campaigners burning their bills in Scotland.

This was part of a recovery ­process—both in the workplace as well as ­politically—from the bitter defeat of the Miners’ Strike four years earlier. Largely unspotted at the time, some 19,000 ambulance workers started an overtime ban in September.

They had been offered a rise of just 6.5 percent. Instead, they wanted a formula that linked their pay to that of firefighters. Firefighters had just got an 8.5 percent increase.

Ambulance unions—Nupe, Cohse and others—also wanted the working week reduced, and for overtime to be paid at a higher rate than normal pay. But privately, Roger Poole, the unions’ chief negotiator, had wanted to settle for the government’s original offer. When that didn’t happen, he was determined to avoid a strike at all costs.

Poole reflected the dominant thinking among union leaders at the time. They believed that the miner’s defeat meant public opinion was a far better weapon than strikes. And, they also insisted that the Labour Party’s electoral needs trumped all other concerns. But when the overtime ban started it soon became explosive.

It hit London especially hard because bosses there never employed enough staff and were dependent on extra work at low pay rates to meet demand. They were determined to play hardball. In late October, they suspended a number of crews for taking action. They even threatened to call the police if those workers attempted to use their ambulances to answer 999 calls.

Managers hoped a public backlash would force the unions to back down. Instead, all but nine of 71 London ambulance stations closed completely as workers occupied them and refused management’s orders.

The crews made it clear, however, that they were ready and willing to answer all emergency calls. If they were unable to, it was because of management action to stop them. For two days there was no emergency cover for a city of 10 million people. Rather than the backlash bosses hoped for, the unions started to win solidarity.

Nurses in the Cohse union at the North Middlesex hospital organised a mass meeting in support of the ambulance workers. Firefighters in south London quickly raised hundreds of pounds for the strike fund.

Street collections also proved extremely successful. It was as if all the anger at the Tories was now refracted through the lens of their dispute. Despite the unions producing no national publicity, action was growing across the country. Crews refused to do hospital transfers and declined to use their radios to say when they had ­finished a job.

NHS bosses though were intransigent. Defeating the ambulance workers was key if they were to hold down pay for others. NHS chief Duncan Nicholls said, “What’s at stake here is the pay ­settlements of one million health ­service workers.”

By November, troops were driving ambulances in London and bosses stopped the pay of all “day workers” that handled non-emergency work. In a crude attempt to divide and rule, they ­continued to pay emergency “A&E” crews. Ambulance workers were more than prepared to meet the challenge. One steward in Manchester told Socialist Worker, “If it comes to a strike, we’re prepared to go all the way. Someone’s got to back down, and it won’t be us.”

Solidarity for the ambulance ­workers continued to pour in. Some 5,000 ­workers struck and demonstrated in east London as the Nupe union in Hackney council called unofficial action. In Sheffield, more than 1,000 took to the streets.

Bus drivers in Hanwell, west London, collected hundreds of pounds in support. Some drivers even stopped mid‑route to join in with handing the money over at a picket line. Instead of anger they were met with applause from passengers. Opinion polls showed up to 90 ­percent of people were behind the union. But one London ambulance worker explained why donations and goodwill were not enough.

“We’ve collected thousands of pounds in the streets, but all the street collections in the world won’t win this dispute,” they said. “It’s got to be turned into action—it’s got to be organised.” A rank and file steel erector from the giant Canary Wharf site in London’s Docklands agreed. He summed up why all 300 of his workmates struck for the ­ambulance workers.

“It’s not so much the money. It’s the force the ambulance workers need.” Billy Steele, a construction ­steward, explained that ambulance workers told a shop stewards’ meeting they needed other workers to take action. The stewards backed the call and put the ­argument to their members. “Without hesitation, they gave us 100 percent backing,” Billy said.

With this kind of support, even more cities were now voting to handle emergency calls only and to occupy their stations. Emergency call controllers in some areas had the confidence to put requests for ambulances directly through to occupied stations. Surely, it was now only a matter of time before officials declared a full strike?

Roger Poole was desperate to avoid a strike. Instead he wanted the dispute to go to arbitration, but the militancy in the stations made this hard. At this point, the Trade Union Congress (TUC), an umbrella group for all unions, decided to act.

In the 14 weeks since the dispute started, its only response had been to issue a two-paragraph press release back in September. Under massive pressure, it now called for a march in mid-January and a 15-minute stoppage at the end of the month.

Its hope was that this official action would head-off further outbreaks of unofficial support. But both the demo and the stoppage had a far bigger effect than the TUC had planned for. Some 50,000 people joined the march in London, and it acted as a springboard for further unofficial stoppages.

Socialist Worker argued the week before the day of action that the “key is to convince people that you work with to take the maximum possible action”. And that’s exactly what many did. Every town across Britain saw some form of protest, with hundreds of thousands taking part in rallies, marches and strikes.

Some 10,000 marched in Liverpool, where council workers and bus drivers had struck. Over 7,000 rallied in Glasgow, where thousands from the Govan shipyards joined a stoppage. In London, buses stopped for an hour and there were many local marches. Pensioners in Muswell Hill, in the leafy north of the city, stopped traffic by linking hands across the road.

Engineers at many giant firms downed tools, with 700 Roll Royce workers joining a rally in Coventry. In Birmingham the city’s symphony orchestra took action to play to the 3,000-strong rally. Buoyed by the outpouring of support, unofficial action short of a strike spread across north west London, Essex, Sussex and Manchester—with other areas escalating their official action.

But a month after this magnificent demonstration, the dispute was back to a stalemate. Poole insisted there could be no national strike and openly stated that arbitration was the only option. Most ambulance workers knew that to win they must escalate to a national, all out strike. But two things held them back.

First, unable to pressurise the union leadership into taking effective action, too few activists felt confident enough to go it alone by striking unofficially. Second, there was no national rank and file organisation among them capable of leading such a strike independently of the union machinery.

Knowing this, Poole and his co-conspirators chose their moment well. They waited until cracks began to appear in the morale at some stations and then slunk off to the Acas conciliation service for talks.

In late February, Poole and top boss Nicholls announced they had “reached the basis for resolution”. Poole added, “The industrial strategy had gone as far as we can take it.” In the weeks that followed he claimed his deal had driven a “coach and horses” through the government’s pay policy. Pay rises, he said, would range from between 17.6 percent to 24  percent over two years.

But, not only did the deal win no pay formula, and nothing on overtime payments or the reduction of the working week, it was riddled with employers’ get out clauses. The Financial Times newspaper was able to crow, “The prospect of an end to Britain’s ambulance dispute, and at a cost which is rather less than ministers might have feared, will be a great relief to the Thatcher government.”

One Liverpool ambulance worker told Socialist Worker, “It’s crap—it’s a big con. In practice it’s no more than 13 percent over two years.” The deal was deliberately complicated too. You can be dead straight when you are telling the truth. It’s when you’re lying that it gets complicated,” a Sheffield union activist explained.

With local activists unable to offer an alternative strategy, it was inevitable the deal would be agreed by a ballot of the members. In March, over 81 percent accepted the offer.

Shop steward Ray Carrick wrote to Socialist Worker from his Toxteth ambulance station in Liverpool.  “Nobody should believe the ambulance crews were defeated by the government,” he said. “We were prepared to continue the fight until a pay formula was achieved. Tragically, and unforgivably our own union leadership decided to throw in the towel and surrender.

“After six months of dispute many ambulance staff decided that if the leadership would not fight any more then we might as well vote to accept. The battle is lost, but be assured the war is still being fought.” Tony was right. By the time his letter was printed, anger at the Tories had erupted in the fight against the poll tax.

Trafalgar Square in central London, which in January had hosted the rally in support of the ambulance workers, was now ablaze and the site of a pitched battle. Within a few short months, Thatcher would be gone.  The ambulance workers had surely played their part. But how much sweeter it would have been if instead of a lousy deal, they had understood their own power to both defy the union leaders and beat the bosses.