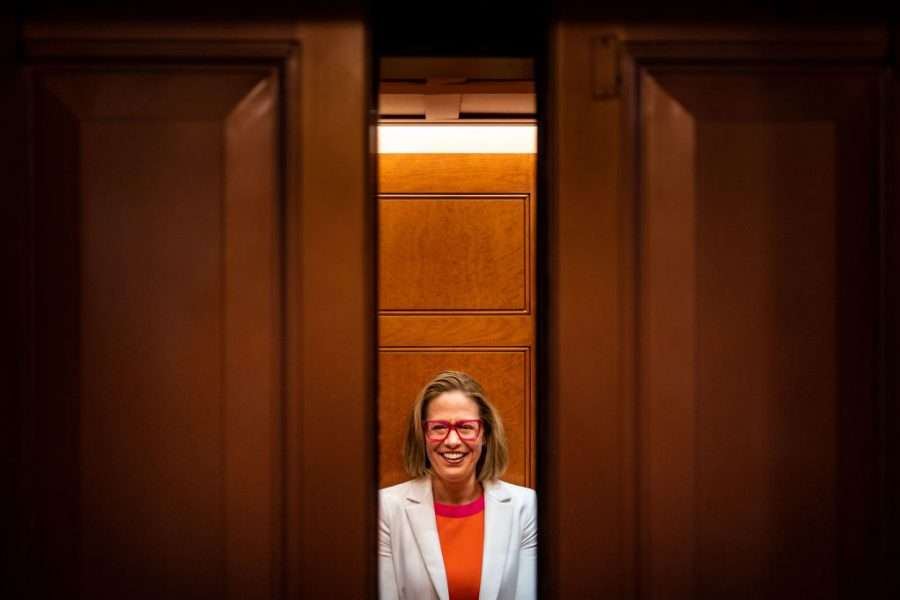 Cast as a principled rejection of partisan gridlock, Arizona senator Kyrsten Sinema’s decision to leave the Democratic Party is the latest act of shapeshifting to save her political skin. Once again, it’s all about Kyrsten Sinema.

Kyrsten Sinema’s done it again. The Arizona senator has a habit of forcing herself into the national spotlight, often for less than inspiring reasons, and her recent announcement that she’s officially leaving the Democratic Party and becoming an independent has predictably set the proverbial discourse alight.

Sinema’s announcement has, to a point, been a long time coming. The Arizona crony capitalist, after all, made her career by presenting herself as a sensible, middle-of-the-road voice, representing the proverbial forgotten moderate American sick of the partisan game-playing in Washington ― and spent the past two years reveling in frustrating her own party’s ambitions, seemingly aping the political strategy of her “personal hero” John McCain, whose Senate seat she currently sits in.

“I have joined the growing numbers of Arizonans who reject party politics by declaring my independence from the broken partisan system in Washington,” Sinema wrote in the op-ed explaining the decision. The pressures of party politics, she explained, were empowering “the loudest, most extreme voices” of both, and made bipartisan compromise “a rarely acceptable last resort.”

It’s always been amusing that for someone who rests her political appeal on being neither left nor right, Sinema’s guiding political beacon has been closest to Jon Stewart–era Daily Show liberalism. But of course, none of this talk of extremism and partisanship has anything to do with Sinema’s decision to become an independent.

The reality is that this was the best thing Sinema could do to ensure her continued political survival. Sinema has managed the feat of holding on to Democratic support even as she’s behaved as a corporate shill and generally pissed off her own voters by using a standard bit of political blackmail: sure, you may not like the way she votes or her opposition to the Democratic agenda, but in a less-than-solidly-Democratic state like Arizona, she’s the best you were going to get. Would you rather a Republican hold the seat?

This was what drove the past two years of behavior that’s infuriated Democrats, including those from her own state, where increasingly incensed progressives — some of whom spent time and effort working to get her elected — have grown more vocal about challenging her next time she’s up for reelection. As a way of showcasing her independence, Sinema’s made a big show of often gratuitously serving as a roadblock to her party’s ambitions.

This strategy isn’t particularly novel, but it is effective, as long as voters have no inkling that your basic case — “I’m the best you’re going to get, so quit whining and just vote for me” — has little behind it. The trouble for Sinema is that Arizona has had two Democratic senators these past couple years, and that other Democrat, Mark Kelly, has just won reelection in the purple state by very different means.

While hardly a progressive, Kelly has been a loyal Democrat, voting with the president 95 percent of the time and standing fully behind the Build Back Better bill, the centerpiece of the Democratic agenda — even as he’s made a show of breaking with the administration on other, comparatively minor matters. It suggests that Sinema’s strategy of establishing herself in the public imagination as the chief Democratic obstacle to her own president’s ambitions was entirely unnecessary, an impression only given more legs by loyal Democrat Raphael Warnock’s recent reelection win in the similarly purple state of Georgia.

In other words, before this move, there was more than a good chance Sinema could fall to a Democratic primary challenge come 2024, since Kelly’s win had obliterated the rationale of the electoral blackmail that would have forced Democratic voters to hold their nose and support her. By going independent, Sinema is now embarking on a different, somewhat more aggressive bit of blackmail, making it clear to the party that she’ll happily put a Republican in office by splitting the vote in a three-way race if they run a Democratic challenger against her.

But Sinema could prove a victim of her own success. Having spent the past few years working hard to convince voters that there was little difference between her and a typical Republican, getting a Republican elected may well be a risk that Arizona progressives are now willing to take.