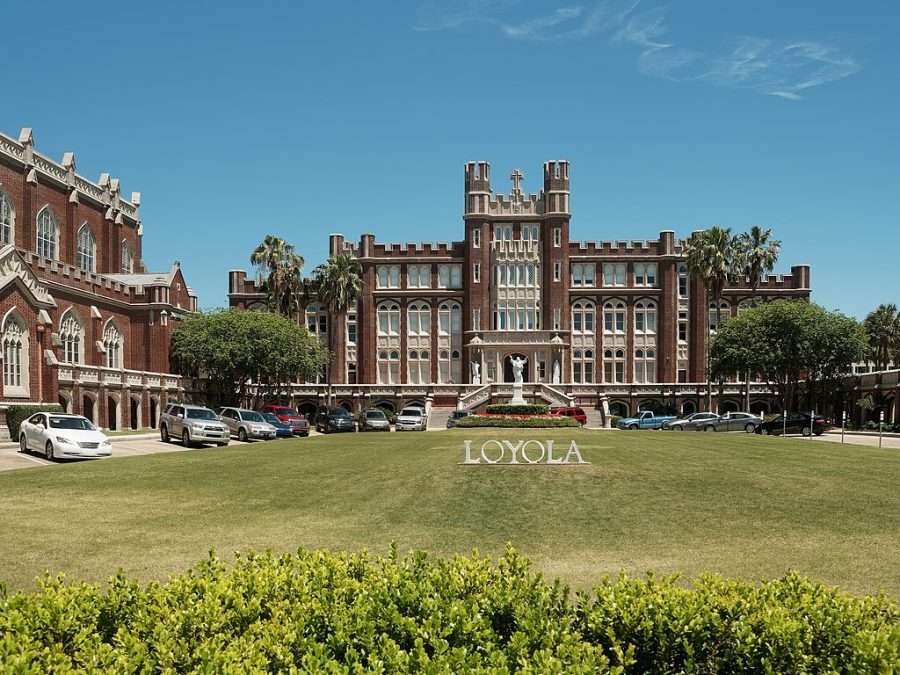 “[It is an] immoral principle that human labor is a commodity.”

The American Catholic Church was once an incubator of working-class activism. As Catholic institutions face unionization drives of their own, will they forsake this legacy or embrace it?

Food service workers at Loyola University New Orleans, a Jesuit university, have recently gone public with their intent to unionize. While the workers are technically employed by a third-party contractor, the university can greatly influence the result of the drive. It has yet to be determined how the university will respond.

An important component of the recent upsurge in labor militancy in the United States has been UNITE HERE’s concerted effort to unionize food service workers employed through private contracting companies like ISS Guckenheimer, Compass Group, Aramark, and Sodexo. As a cost-saving measure, public institutions (prisons, schools, universities, hospitals, airports, etc.) and private corporations (particularly tech companies that provide employees’ meals so they don’t feel compelled to live anywhere but the workplace) often contract out back-of-house food preparation and front-of-house food service labor. To avoid having a direct employer-employee relationship with its workforce — and most importantly, to avoid the regulations and demands inherent to that relationship, such as the provision of benefits and adequate wages — these “employers” instead farm out their labor needs to companies that specialize in providing neither benefits nor adequate wages.

Just one of those companies, Sodexo, generated a net profit of roughly $363 million in 2021 alone, while a full-time employee, at some locations, can expect to make less than $25,000 a year, with little to no health or retirement benefits. Full-time Sodexo employees at Loyola, some of which have held their jobs for more than twenty years, make just $13.75 an hour and need to work additional jobs to pay for medical insurance. Fittingly, Sodexo, which is headquartered in France, is an abbreviation that stands for Société d’Exploitation Hotelière.

Given these conditions, unions like UNITE HERE have made great strides organizing these workers. To take just one instance, since 2018, UNITE HERE has organized food service workers at twenty-three Google offices, representing roughly 90 percent of all food service workers at Google. Overall, UNITE HERE organized sixty-two thousand workers from 2014 to 2019. Importantly, the union has focused specifically on the South, a longtime bastion of “business friendly” nonunion labor.

In its nationwide campaign to organize Sodexo workers, UNITE HERE has recently initiated organization campaigns at several Southern universities that contract their food services through the company. Loyola University New Orleans, a private Jesuit university with a long history of fostering social justice causes (and where I happen to teach in the Department of Sociology), is one of those universities.

On a strictly moral level, it might sound strange, even hypocritical, that a social justice–oriented university affiliated with the left-wing of the Catholic Church would employ nonunion labor in the first place, let alone contract a demonstrably exploitative company with a litany of unfair labor practice accusations. Ignoring, momentarily, that the thrust of the Gospels is, in essence, “rich people are going to hell,” and the fact that the Pope, a Jesuit himself, has consistently advocated for the right to organize unions, Loyola has an institutional history of promoting organized labor.

Father Twomey was one of many “labor priests” that the American Catholic Church produced during the early to mid-twentieth century. Twomey is unique, however, in that he began his activist career at precisely the same time that the labor priests’ activism, in general, began to wane. As Steve Rosswurm has shown, the heyday of American Catholic labor radicalism peaked in the 1930s as the Church attempted to “carry the message of trade unionism into every working-class Catholic home.” The Church, with the Jesuits as the vanguard, established dozens of labor schools across the country, like the Xavier Labor School in Manhattan and the Kansas City School of Christian Workmen. These labor schools sought to undermine “materialistic capitalism” by training workers how to organize their own unions. Perhaps more consequentially, the Association of Catholic Trade Unionists (ACTU), founded in 1937, served as an organizational base for both the initiation of union drives and partisan control of existing unions.

The Association’s activism, however, changed dramatically in the mid-1940s. Anti-communist from the beginning, ACTU’s strategy shifted over time from a positive program of attracting workers to the Church through its support of working-class causes — that is to say, away from the clutches of the secular Communist Party, which, contrary to Red Scare myths, experienced widespread popularity during the period — to a negative policy of actively attacking and red-baiting left-wing unionists. Rather than organizing workers, the Church’s labor policy began to focus almost exclusively on purging existing unions of left-wingers and establishing competing anti-communist unions to siphon members from Communist-controlled ones. The purge of the left-wing of the labor movement, aided in no small measure by the American Catholic Church, ultimately led to the long-term decline of the American labor movement.

Louis Twomey was born in Tampa, Florida, in 1905. Besides turning down a contract to play professional baseball with the Washington Senators to enter the priesthood, he lived a relatively unremarkable life until his ordination in 1939. After his ordination, Twomey earned multiple master’s degrees, served as a high school principal, and, in 1947, was assigned by the Jesuit leadership of the South to Loyola University New Orleans. Formally, Twomey was the regent of the university’s law school and a lecturer of jurisprudence. However, immediately upon arriving at the university, Twomey established the Institute of Industrial Relations.

The institute’s initial philosophy — that is, Twomey’s initial philosophy — was one of labor-management accommodation. Twomey assumed that the relationship between labor and capital need not be inherently antagonistic, and, through good-faith negotiation, the wants of both could be achieved. They could, in Twomey’s words, “quit their class struggle . . . in the spirit of Christian and democratic loyalty to American ideals.” The issue, however, was that American business, especially in the South, was not particularly interested in quitting the class struggle.

Almost from the beginning, businesses refused to send representatives to institute courses or meetings, considering even the concept of negotiating with workers as a group as too prolabor. So Twomey and his institute, eventually renamed the Institute of Human Relations, shifted sharply to the left and became what capital feared it already was: a center that prepared workers for the class struggle. It is worth emphasizing that the behavior of capital is responsible for Twomey’s ideological shift. Since the bosses refused to acknowledge workers as anything but exploitable labor, Twomey eventually recognized the inherent antagonism between capital and labor, and, more broadly, between capital and the teachings of Jesus Christ.

Twomey began to regularly offer courses on how to organize and proficiently participate in labor unions (courses like “Principles and Practices of Collective Bargaining” and “Public Speaking and Parliamentary Procedure”), as well as more general courses on the labor movement as a whole (“Current Industrial Problems”). Importantly, Twomey, unlike much of the Church at the time, was a dedicated integrationist and anti-racist. Courses at the institute were open to workers regardless of race, even as the university itself remained white-only (an issue Twomey was actively attempting to remedy). While the courses it sponsored did not provide college credit, Twomey’s institute was one of the first, if not the first, instances of integrated education on a college campus in the Deep South since Reconstruction.

Twomey did not stop at integrating the institute. He, along with the chair of Loyola’s sociology department, Fr Joseph H. Fichter, SJ, worked tirelessly to integrate the entire university, eventually succeeding in 1952, when the law school accepted its first black applicants. Twomey had first attempted to integrate the university in 1949, but failed after the administration yielded to student demands to keep the school segregated. That first cohort of black students included Norman Francis, who went on to become the first black president of Xavier University, the only Catholic Church–affiliated historically black college or university, and who also led the Louisiana Recovery Authority after Hurricane Katrina, receiving the Presidential Medal of Freedom in 2006.

For Twomey, the elimination of racial oppression and working-class exploitation went hand in hand. He would commonly describe the cause of labor organizing and the fight against white supremacy as “two sides of the same coin.”

Twomey was deeply involved in a series of strikes conducted by disproportionately black sugarcane workers throughout the 1950s. The sugarcane workers, often sharecroppers whose homes were on planter-owned property, lived in a state of “semi-feudalism,” as Twomey put it. The workers, with Twomey’s assistance, established the Agricultural Workers Union, which represented more than two thousand sharecroppers and laborers. Twomey solicited larger labor movement support, especially through the Teamsters, who provided financial assistance during the strike.

The strike ultimately failed — not due to the lack of resolve or militancy of the workers but because of a backroom deal brokered between the state’s labor apparatus (the Louisiana Labor Council) and the sugar planters. Louisiana became a right-to-work state in 1954, but the law was repealed in 1956 because the Labor Council agreed to abandon the cause of the cane workers if the sugar planters agreed to support the elimination of right-to-work in the state. This event led Twomey to deeply distrust the bureaucratization of the labor movement, compelling him to double down on the promotion of union democracy and rank-and-file militancy through the institute.

Twomey spent the rest of his life as a committed advocate for labor and civil rights. He served, in an advisory capacity, in the Johnson administration’s Department of Labor, demanding that the national government take seriously the plight of the rural working class, black and white. As a result, he was often accused, by those in and out of the Church, of being a communist.

Twomey died in 1969, and his institute, after various name changes and a definite shift away from labor issues (the final name of the institute was the Twomey Center for Peace Through Justice), followed him in death in 2017.

Sodexo food service employees in the South are disproportionately black, unconscionably exploited, and subject to the ever-present oppressive structures of white supremacy. Comparisons to the sugarcane workers that Twomey championed are, I think, fairly accurate. Twomey, I’m sure, would be horrified if he knew this was occurring at the university he used as an institutional base to support the cause of civil and workers’ rights.

I’m also sure that he’d support UNITE HERE in its mission to organize these workers.