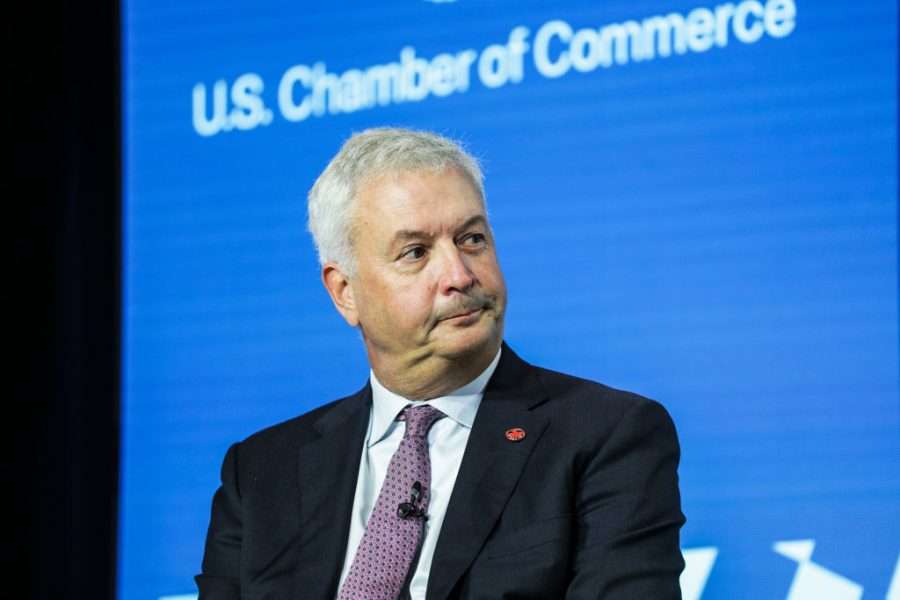 Employers took billions from the Canadian government in wage support funds, and many of them continued to pay CEOs millions and issue dividends. Yet the government is now looking for payback from workers, not bosses.

Michael Rousseau, president and chief executive officer of Air Canada, during the US Chamber of Commerce’s Global Aerospace Summit in Washington, DC, on September 15, 2022. (Valerie Plesch / Bloomberg via Getty Images)

We know the neoliberal state valorizes the business sector. Political speeches about business often sound like benedictions, though we do get the odd, fleeting song of praise for the worker who makes all industry possible in the first place. Occasionally, in an effort to make our elected officials seem relatable, we hear a shot taken at the corporate class. But the fix is in. We all know who has the power — it’s clear as day in the plaudits paid to business by our political classes. And in the parlance of neoliberal speech, “business” is a synecdoche for “businessperson” — and a “businessperson” is an owner, not a worker.

Because the working public is fraught with class dis- or misalignment, pundits and politicians constantly attack a “lazy” and “entitled” workforce without adequate pushback. In the absence of a prominent voice from labor to correct this narrative, the media depicts working people as loafers waiting for their chance to take advantage of state largesse or corporate noblesse oblige. So, when in March 2020 the government of Canada introduced two pandemic support measures — one for employers and one for workers — it was a safe bet for anyone paying attention that when it came time for settling accounts, there would be a marked difference in whose benefits would be scrutinized and whose would be greenlit.

Last week, Canada’s auditor general, Karen Hogan, released a report on pandemic benefits. In her study of the Canada Emergency Response Benefit (CERB) — disbursed to individuals — and the Canada Emergency Wage Subsidy (CEWS) — disbursed to businesses — Hogan concludes “the federal government quickly delivered COVID-19 benefits to Canadians” but found “post-payment verification work is falling short.” It’s not hard to guess who will be in the most need of this post-payment “verification.”

Canada paid pandemic benefits between 2020 and 2022 amounting to CAD $210 billion. Of that, $100 billion went to CEWS, which ended in October 2021. Roughly 36 percent of Canadian businesses received subsidy support, with the top three industries posting much higher rates. A full two-thirds of the accommodation and food services industry received CEWS, with arts, entertainment, and recreation next at 56 percent, and manufacturing at 55 percent.

In her report, Hogan identifies $4.6 billion in payments to ineligible recipients through individual pandemic supports. This number includes CERB payments but excludes CEWS. For the wage subsidy, the numbers were much higher.

“Our analysis identified 51,049 employers that received $9.87 billion in Canada Emergency Wage Subsidy payments whose monthly GST/HST filings did not demonstrate a sufficient revenue drop to be eligible for the subsidy,” states the report. And that total could be much higher — the report suggest it could be up to $15.5 billion.

So far, the government’s repayment focus has been on individuals and not employers — as low-income people struggle to repay the cash. Shocker. Labor journalist Jeremy Appel has a sharp take on that predictable outcome.

On the business side, while ineligibility (due, for instance, to applicants not meeting the revenue decline threshold) is grounds for repayment, one can imagine small businesses making good faith errors as they tried to support their workers. That doesn’t absolve the state for leaning into heavily supporting employers over workers, but it does ask us to distinguish cases that are warranted from those that are unjustified.

A primary consideration in determining justification is scale. It would be absurd to lump your local café or record shop in with telecommunications oligopolists, energy conglomerates, or retail chains. Still, we need to ask why it is that the $2,000 a month CERB benefit paid as well or better than pre-pandemic wages for so many workers. This problem — the fundamental problem of wages — reminds us that small businesses, in spite of the aesthetic preference of locavores, are often no better than their corporate counterparts.

One Rule for Bosses and Another for Workers

Of the 447,149 businesses who received CEWS, over 250,000 of them had between zero and five employees. In the interest of full transparency, this writer, who is incorporated and pays himself a monthly wage, is one of them. I like to borrow a phrase and remind people I’m not a businessman; I’m a business, man — to the tune of tens of thousands of dollars a year! Perhaps I should have been a grocery store or oil company CEO. But that’s fodder for another column.

A mere 0.34 percent of businesses with five employees or fewer (868) are under audit compared to 32.69 percent (85) of those with 1,000 to 4,999 employees and 41.67 percent (ten) of those with more than five thousand workers. All told, a mere 0.8 percent of recipients — representing 12 percent of the total subsidy payouts — are or were under audit. In contrast, as many as 1.7 million Canadians may have to pay back CERB funds out of 8.5 million total recipients — or 20 percent. And that’s before any further investigations that may emerge after the auditor general’s report, which is recommending further investigation of over four million recipients alongside another 259,000 more for the Canada Recovery Benefit, which replaced CERB.

In May 2021, the New Democratic Party called on the government to claw back CEWS payments from companies who used the program for purposes other than paying wages. In his letter to the Trudeau government, NDP MP Peter Julian wrote, “The wage subsidy was clearly supposed to go to workers and toward protecting Canadians’ jobs — not bonuses for top corporate brass.”

As critics pointed out at the time, the Liberal government failed to place restrictions on businesses who took CEWS funds. That meant big corporations could take the money and run — all the way to share buybacks, grotesque executive compensation and bonuses, and dividend payouts. And run they did. What was the government going to do? Audit them years later, at great expense, after that money had done its job? Corporate giants are nothing if not good at employing accountants and lawyers whose expertise is jamming up the feds.

In December, 2020, the Financial Post found nearly six dozen companies that had received at least $1.03 billion in wage subsidies while collectively paying out more than $5 billion in dividends. The Post also reported that seventeen of these companies bought back shares or introduced buyback programs.

Businesses who bothered to mount a defense tended to take the line that dividends and buybacks were financed with other money. Not this pile, you see. That pile. Corporate PR’s attempts at misdirection sometimes beggar belief. Companies tried to sell the idea that they were too poor to pay employees without taxpayer cash while being rich enough to make it rain dividends, buybacks, and bonuses.

Imperial Oil was the most egregious of the lot, taking $120 million in wage subsidy cash while paying out a whopping $324 million in dividends. Others on the list include Corus Entertainment, Leon’s Furniture, and Extendicare. In the case of Leon’s, the Financial Post investigation noted “the injection of CEWS it received inflated the company’s net income to historic levels that may look out of the norm after seeing how hard most retailers were hit during the lockdowns in the early months of the pandemic.” Keep in mind, all this wage subsidy money was presumably eligible funding that businesses could, by way of a shell game, accept while carrying on as usual. Because the government didn’t bother to make the rules of disbursement stringent enough to forestall abuse, businesses took advantage in exactly the way one would expect.

While big companies were receiving wage subsidy money in the upward of tens of millions of dollars, their top executives were making a killing. In January,2022, the Canadian Centre for Policy Alternatives released a report that found average annual compensation for the top one hundred chief executives in Canada was $10.9 million. Air Canada stood out as a particularly egregious offender. While senior executives eventually gave back their bonuses after public outcry, the company initially paid out $10 million in bonuses after taking billions in public support, including a liquidity program and the wage subsidy.

As the dust settles on the pandemic support programs in Canada, we ought to pay particular attention to who bears the brunt of the hunt for so-called overpayments. We ought to also resist attempts to construct individual CERB recipients as lazy, entitled fraudsters while big companies made off like bandits while taking public wage subsidy funds. As always, our primary question of analysis should be, who has the power?, and we should adjust our critiques and priorities accordingly. In this case, it’s not hard to do. Sure, workers received $2,000 here and there — just enough not to be able to afford both rent and food. But it was businesses that made record profits, offered generous dividends, bought back stock as a market flex, and paid their executives millions upon millions in compensation.