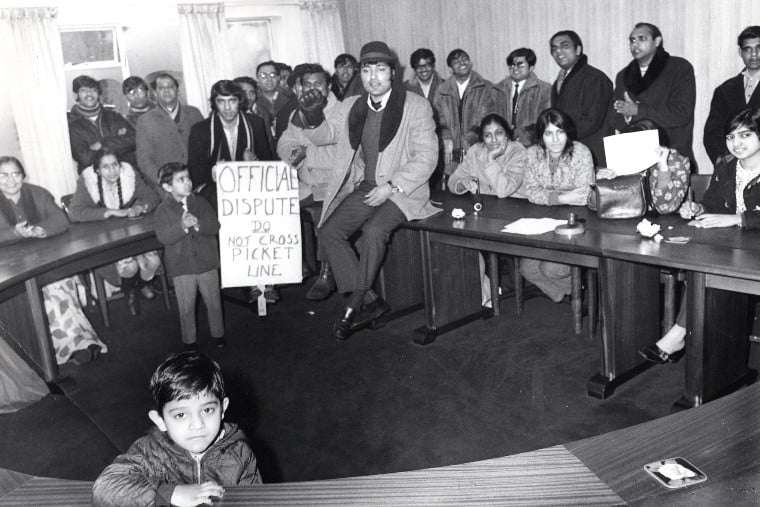 In December 1972 an unofficial strike ended in victory. It was part of a series of struggles which transformed the politics surrounding race in Britain.

The strike at Mansfield Hosiery in Loughborough in the East Midlands involved around 400 Asian women and men. They walked out over low pay and vicious racism. Their eight-week dispute was a vital link in a chain of strikes against exploitation, racism and sexism, which changed the face of the trade union movement.

It sparked off at the Trinity Street factory at the beginning of November when around 370 workers stopped work. In solidarity, some 80 Asian women from the ­subsidiary Clarence Street factory came out days later.

The strikers—who made jumpers—won significant concessions from both their employers and their union, the National Union of Hosiery and Knitwear Union (NUHKW). “They are determined to spread the strike and win,” Socialist Worker reported in November 1972. “The poor pay and conditions are a direct result of management efforts to divide and rule.”

The NUHKW’s general secretary later described the strike as “perhaps the most significant dispute” in its history. But at the time, the union’s officials were distinctly unenthusiastic about supporting their Asian members.

The Trinity Street factory had three groups of workers. First, 80 knitters, who were all white. They were assisted by runners-on—three were white and 80 Asian. The lowest paid were the bar-loaders who were all Asian.

Asian women were stuck in the lowest paid cutting jobs, with higher-paid jobs reserved for white workers. The supervisors were all white and treated them despicably.

They refused to call them by their names. When Asian women dared to voice a grievance, they were told to shut up. White women workers were paid a consistent wage but most of the Asian women worked on a piece-rate basis—paid by what they produced.

The Asian women’s lack of English was used against them. They were often ignored during negotiations and forced to sign documents they didn’t understand.

Neither the management nor union made any attempt to get interpreters. One worker was told that she could not wear her sari to work. The bosses quoted the industrial safety regulations and told her to wear “English clothes or trousers”.

Mansfield Hosiery Mills had never previously shown concern for the safety of its women workers. “I pointed out to ­management that this was against our customs and told the union four or five times,­­ but they did nothing,” the striker recalled.

From June 1972 the ­bar‑­loaders demanded £5 more a week. They struck on 3 October without union support. The bar-loaders were offered an extra £1 a week but rejected it. Bosses sent them letters of dismissal on 27 October—which they gave back.

The strikers returned after winning pledges of no victimisation, redundancies, or racial discrimination. But 41 white trainee ­knitters were in their place. So, they struck again.

Initially, the women saw themselves as auxiliaries to men. As one woman said, “The colour bar applies to us all. If our brothers are on strike, we have to give them support.

“They need to feel self‑respect, when they are treated like dogs how can we go in, if our brothers are out.” Soon, the women were raising their own demands.

Mr. Naik was a strike leader. He wrote to Ronnie Carter, the district secretary of the NUHKW, to explain the women’s position. “Several women have ­complained that the attitudes expressed towards them have been racialistic,” he said. “As you know there is no representation in the factory for workers, and no doubt this contributes to the bad relations there.

“There are other bad ­industrial practices engaged in at the factory but it would appear that they reflect a certain attitude taken towards people who are regarded as immigrants.”

The union repeatedly tried to call the strike off.  Socialist Worker accused the union of being ­undemocratic and racist at the time, “thereby stifling the possibility of any united anti-management strategy”.

But the sell-outs were met with resistance from the strikers. They set up a solidarity committee. Some trade union branches, local university student unions and the Black People’s Freedom Movement organised support.

Bennie Bunsee—a South African-born anti-racist activist living in exile from the apartheid regime—helped to organise the strike committee. His presence led local papers to denounce the “outside agitators” who were misleading supposedly naive workers.

But the strikers did not need prompting to fight. They organised a march through Loughborough and staged a protest outside Marks & Spencer which they accused of profiting from the mill’s racism. The Leicester branch of the National Front staged a counter protest chanting, “Put Britons first.” But the strikers faced them down.

The union movement was divided by racism. Members in some areas left the union to avoid supporting the Asian strikers, or accepted their demand for higher pay but not better jobs.

Some 100 scabs were also brought in throughout the dispute with the cooperation of the NUHKW. In contrast, members of the Engineering Union wrote to the Trade Union Congress to complain that the NUHKW was ­cooperating with the management.

The strikers had enough of their union’s lack of action and occupied its offices, demanding the strike be made official. The union leaders gave in and supported the strike from 4 December. From that point, the strikers got strike pay—a step forward.

“Making the strike official will greatly help the ­workers, many of whom were ­nearing starvation level after being refused all payments by the local Social Security office,” Socialist Worker said. But this also reflected the sexism women faced. Men got £6 a week, while women received just £4.

It was also conditional on the strikers’ accepting arbitration. But the strikers voted unanimously to not accept until they knew the terms.

In response bosses went on the offensive. They went to the homes of strikers to persuade them back to work. The strikers refused. Women strikers joined determined picket lines outside the factory.

On 7 December the Leicester Mercury reported scuffles between the police. Around 40 picketers held up a van ­entering the factory and let its tyres down.

The NUHKW began to creak into action under pressure. At one public meeting the officials promised to set up factory representation at Clarence Street. A factory committee was set up with 15 members, 11 of whom were Asian women.

Yet during an inquiry into the dispute by the Department of Employment, the union “tried to get the strikers to return to work without any assurances”, reported Socialist Worker. The strikers threatened to occupy the union offices again, forcing the department to make assurances on their demands.

The strike finally ended on 30 December when the ­workers won a pay rise and the right to apply for higher skilled jobs. The strike was won by breaking down the racism of the union and management.

The strike changed ­relationships between workers in the factory. Asian women and white women discussed ­problems together.

Bunsee reported in the ­feminist magazine, Spare Rib that some women were ­learning English. Some of the English women also learnt a few words of Gujarati.

Most importantly, the strikers won the right to be treated with dignity. Their slogan was “We will not go back like dogs”—and they did not. They faced down local Nazis, their exploitative bosses and racist union—and proved that militant collective action could win.

These courageous working class activists inspired Asian workers across the East Midlands and beyond. In 1974 a strike at Leicester’s Imperial Typewriters was organised by migrant workers. In 1976 Asian women at Grunwick in west London won wide support from trade ­unionists in their battle for union rights and dignity.

Workers’ courage and solidarity showed in practice that unity depended on Asian women workers. Class struggle could never again be seen as the business of white men.