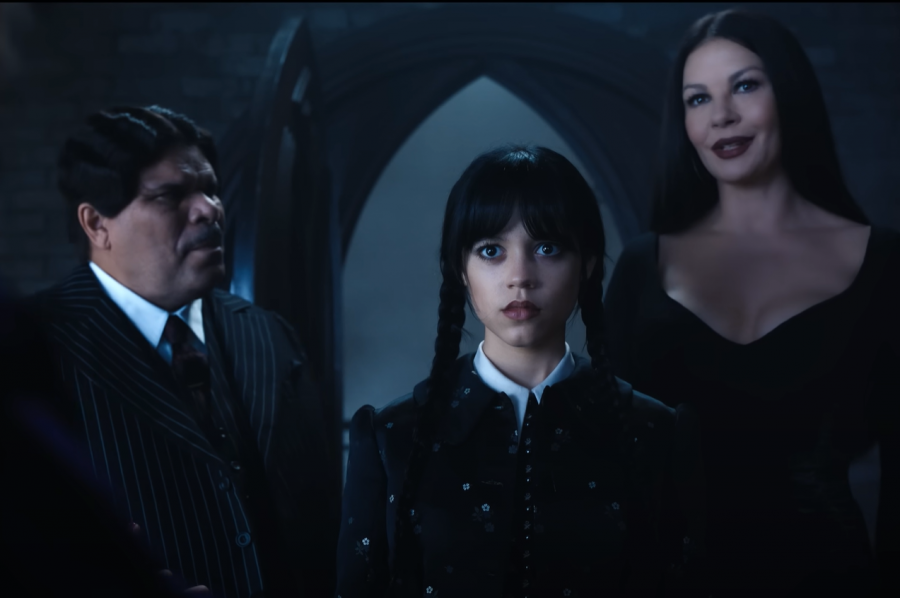 There’s a scene in episode four of Wednesday that made me rethink the whole series. It takes place at the school dance at Nevermore Academy, a haven for supernatural teens, where reluctant enrollee Wednesday Addams unleashes some seriously great dance moves to the Cramps’ “Goo Goo Muck.” She flails her arms up like someone having a fit, her eyes rolling back in her head — she jolts her neck sideways like a victim of hanging — she stalks her dance partner like a predator, then waves her limber hands and wrists at him in confounding eel-like movements. It’s terrific!

Wednesday is a record-breaking hit with Netflix viewers already, behind only Stranger Things and Monster – Dahmer: The Jeffrey Dahmer Story (which is quite a snapshot of our culture). But up until that dancing queen point in the series, I didn’t much care for it. This Wednesday Addams isn’t my Wednesday Addams.

See, I’m a big Addams Family fan and generally try to keep up with all related content, even the terrible stuff like the 2019 animated feature film version that was such a travesty yet made so much money. So naturally when I heard about the new Wednesday show that’s generating so much talk, I was all eagerness to check it out.

I hate to be a purist about it, but this Wednesday bears very little resemblance to the preferred versions of the character. She’s not like Charles Addams’ immortal creation — the wan little girl with the lizard for a pet who guillotines her dolls. She’s also not in the vein of Christina Ricci’s brilliant interpretation of the character in The Addams Family (1991) and Addams Family Values (1993). Ricci, though, appears in this series playing the awkward, bespectacled Marilyn Thornhill, the only normie teacher at Nevermore Academy, a character who strangely enough seems like a minor variation on Ricci’s Misty Quigley, the superficially sweet but deeply psychopathic nurse in Yellowjackets.

Ricci’s marvelously deadpan Wednesday is nowhere in evidence as an inspiration here, because there’s a consistent emphasis on Wednesday’s supposedly blocked emotional life that is steadily being chiseled away at as she makes friends and goes to therapy. There’s actually a strong indication that this Wednesday is going to benefit from therapy — I can’t imagine a more damning sentence I could write about this series. How much more impressive it was that, as a child actor, Ricci used to correct her director, Barry Sonnenfeld, when he’d coach her before a scene by trying to explain Wednesday’s feelings to her. She’d simply remind Mr. Sonnenfeld that Wednesday doesn’t have any feelings.

It’s not Jenna Ortega’s fault — she’s playing the role of Wednesday as written, as well as it can possibly be played. She is wonderfully charismatic in the part. The problem is that, as conceived by show creators Alfred Gough and Miles Millar, this Wednesday Addams is a hopeless hodgepodge of qualities. She’s a remorseless sociopath, yet she has conventional Psych 101 issues such as resentment of her mother Morticia (Catherine Zeta-Jones) for trying to make her over in her image, and disgust at both her mother and father (Luis Guzmán) for their constant erotic appreciation of each other. Half the time, Wednesday is practically an American Anyteen with a slightly edgier sense of style.

When her main rival, the siren Bianca Barclay (Joy Sunday), says she envies Wednesday’s total indifference to what people think of her, Wednesday says she wishes she cared more. It’s head-spinning. Wednesday’s enviable Addams-like self-possession and lack of interest in ordinary people are her leading qualities.

The plotting is rife with confusion. In episode one, Wednesday flunks out of her regular school after she gets revenge — by dropping piranhas in the swimming pool — on the water-polo-playing jocks who’d been bullying her brother Pugsley. She’s sent to Nevermore Academy, which is attended by vampires and werewolves and all sorts of supernatural kids, but somehow they’re just as astounded by Wednesday as ordinary vanilla teens are, and she scorns them just as completely. Even with her extra paranormal skills — Wednesday is a psychic here — she regularly stuns all these supposed creatures of the night with her dark attitudes.

There are legions of cute boys with crushes on Wednesday. Well, three, but it seems a lot more. There’s fellow student Xavier Thorpe (Percy Hynes White), who has the supernatural ability to bring his drawings to life. There’s the ordinary human barista in town, Tyler Galpin (Hunter Doolan), whose father Sheriff Galpin (Jamie McShane) has a vendetta against Nevermore Academy. And there’s the campus beekeeper Eugene Ottinger (Moosa Mustafa).

I guess it figures — who wouldn’t love Wednesday? — but the cute boyfriend phenomenon has been a menace to all horror content since Twilight ruined vampires and werewolves. In this series there are endless scenes of spotty teenage boys rebuking Wednesday for not returning their feelings. And worse — Wednesday is made to feel increasingly guilty and concerned about this. Why? For the love of the Dark Lord, why?

I don’t like to get into this kind of preachiness, but I have to note that girls are always being pressured into thinking they have to honor the feelings of every rando boy who likes them, and here was a perfect chance to repudiate this nonsense. Wednesday doesn’t owe anybody reciprocal feelings. Nobody does. But especially not Wednesday!

Tim Burton is directing the new series, which I didn’t realize until I saw his credit in the closing titles. For decades he’s been weakly commodifying his original vision, which was once delightful and unique and got him kicked out of his coveted Disney animator spot in the 1980s. Burton was the oddball product of the Southern California suburbs, born in Burbank, and what he wanted most as an antidote to sun-bleached conformity was a kind of cheerfully inclusive community Gothic, perhaps best represented in his masterpiece, Ed Wood (1994). Burton was great for a while, doing a real service for people suffering through the entertainment hell associated with the Reagan Era, especially with Pee-wee’s Big Adventure (1985) and Beetlejuice (1988).

But it all went to pot once he got so rich and successful and began directing as if sandworms ate his brain. He’s tended to make ever-weaker commodifications of his early triumphs; by now Tim Burton films are almost unwatchable.

Anyway, Burton now stands for a kind of generic “dark vision,” a twee Goth aura that can be applied, repackaged, and sold in any number of ways, which I guess makes him ideal for the purposes of Netflix and this series.

Still, for all the glaring flaws of the series, I have to admit the “Goo Goo Muck” dance scene has captured my interest. I’ll have to watch a few more episodes of Wednesday to see if it’s going to live up to that magnificent dance. After all, I haven’t even seen Uncle Fester (Fred Armisen) yet, and that’s key to the whole Addams Family experience.