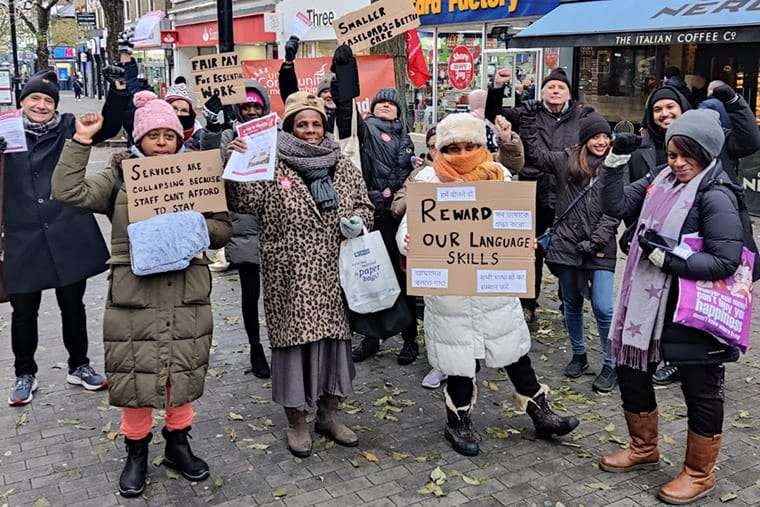 Hestia workers struck on 13 December (see below), one of  a series of pay and staffing strikes Picture: Ben Windsor

Strikes ready for take off at Heathrow and Highlands

Around 350 workers employed by Menzies Aviation planned to strike for 72 hours at London Heathrow Airport Terminals 2, 3 and 4 in mid-December.

The baggage handlers, members of Unite union, are fighting for a pay offer at least matching inflation and planned to stop for 72 hours from 16 December. Previous action by this group of workers caused a lot of disruption.

Bosses offered cargo workers 9.5 percent backdated to May 2022, which angered the baggage handlers who were offered less.

Unite regional officer Kevin Hall said, “Heathrow passengers faced disruption, delays and potentially cancellations in the lead up to Christmas but this dispute is entirely of Menzies own making.”

Highlands and Islands Airport workers were set to strike on 19 December and 22 December.

The Unite union members who work in Fire and Rescue, security and administration voted 73.5 percent for action after they were offered a 5 percent pay rise.

Harrods’ security guards were still striking for a higher pay offer in the run-up to Christmas. The strikes by Unite union members were set to include Christmas Eve and Boxing Day.

The posh shop may face record amounts of goods disappearing without payment.

Workers at Quorn’s meat-free paste factory in Billingham, County Durham, continue their pay strikes that began in September. More than 60 workers at the factory have rejected a 4 percent pay offer plus a one-off £1,000 payment.

They have previously protested at London’s Plant Based World Expo.

Arrow XL workers escalated in early December to all-out pay strikes. The 350 Unite union members are paid the minimum wage and have been striking since 24 October over pay. Bosses of the delivery firm have offered a 5 percent rise.

Workers employed by Hestia struck for two days in mid-December against understaffing.

Workers at Mizkan in Rochdale were still putting bosses in a pickle in the run-up to Christmas as strikes continued for the 50 Unite union members.

By mid-December they would have struck for 32 days. The workers, who make pickled vegetables and vinegar, rejected a 5 percent pay offer.

Some 50 Bristol council housing officers and team leaders who manage the council’s 27,000 tenancies were set to strike over unsustainable workloads for three days in mid-December.