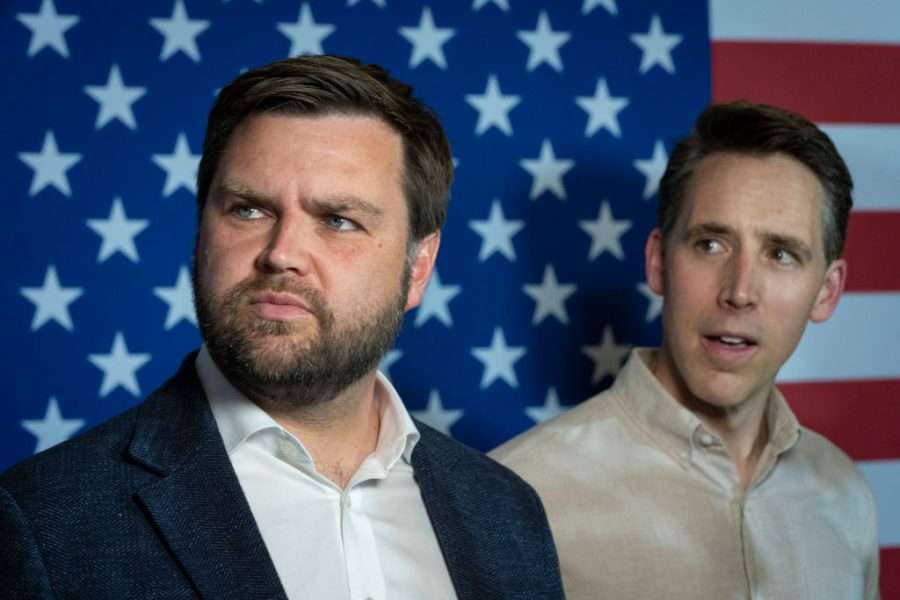 The Democratic Party has sold out and ignored workers over and over in recent years — so much so that despite Republicans’ steadfast commitment to the rich, they’ve also made significant inroads in winning over working-class voters.

“The rail workers had good reason to threaten a strike,” a US senator wrote last week. “Railway workers wanted sufficient paid leave to cover illnesses, and the big companies didn’t want to provide them, despite the fact the rail companies are more profitable than ever. How have they gotten so profitable in just the last few years? By cutting the number of rail jobs and working laborers harder. The record profits of the rail industry have been a tremendous victory for Wall Street. Not so much for workers.”

If you think the senator who wrote that was Bernie Sanders or Elizabeth Warren or some other Democrat, think again. It was January 6 fist-pumper Josh Hawley, the Republican from Missouri.

That’s right, while President Joe Biden was behaving like a villain from Les Misérables — busting workers’ strike and then eating caviar and lobster at a black-tie dinner with the French president — Hawley was penning that essay, which culminated in him declaring: “Wall Street and Washington say this anti-worker agenda is the natural order of things. They’re wrong, as usual. We don’t have to follow this path — and we shouldn’t a moment longer.”

Many liberals will stop reading right here, insisting that Hawley is an insincere insurrectionist — which happens to be true. Indeed, Hawley, Sen. Marco Rubio (R-FL), and other fake populists are often LARPing a good game about paid sick days, the $15 minimum wage, and COVID-19 relief checks, but they’ve avoided backing legislation to strengthen union rights and routinely cast votes with the GOP’s big donors. It was the same with Donald Trump: for every decent health care initiative and direct aid program the former Republican president stumbled into supporting, he was spending far more time as a standard-issue shill for capital against labor.

And yet, laughing at the GOP’s fake populists as if they are politically irrelevant ignores a significant and dangerous trend: Democrats’ genuflections to their corporate donors — whether breaking a strike, authorizing corporate giveaways, or stalling a $15 minimum wage — have been handing conservatives myriad opportunities to court working-class voters.

And lately, polling data show those voters have been responding.

Since the 2018 midterm elections, Republicans have gained seven points among voters whose annual income is below $50,000, according to exit polls. In this year’s midterm elections, those surveys show the GOP won a plurality of all voters whose income is below $100,000 — also a seven-point gain since the last midterm. Republicans also won 42 percent of union households.

The gains are reflected across demographic lines.

“There is an impressively large decline in the Democrats’ margin among nonwhite working class voters between 2018 and 2022,” noted poll analyst Ruy Teixeira. “In 2018, Democrats carried this group by 57 points. By 2022, that margin was down to 34 points, a stunning 23 point decline. This was even larger than the fall among white working class voters where the Democrats’ deficit ballooned from 20 points in 2018 to 35 points in 2022.”

In a downwardly mobile country whose affluent class is shrinking and whose working class is growing, these numbers are bad news for Democrats and good news for Republicans. That is why the Hawley crew, Steve Bannon, and other far-right icons are so focused on spotlighting Democratic betrayals that sell out workers. It’s also why conservatives recently launched a new think tank to try to devise policies and messages that court the working class. All of them are dreaming of a realignment in which the GOP wins big as a conservative working-class party.

Young voters prevented that dream from becoming a reality in the last election. They rescued Democrats after President Biden was successfully pressured to advance the student debt relief he had promised during his presidential campaign. And for all the Hawley crew’s bluster about the working class, the GOP is still mostly the party of Mitch McConnell, Mitt Romney, and corporate money — as evidenced by Republicans mustering only six Senate votes to give rail workers adequate paid sick days.

But things can change fast, and the threat of a realignment will persist if Democrats remain complacent.

What does that complacency look like in practice? In the current moment, it would look like Democrats using a lame-duck session of Congress to pass strike-breaking legislation against workers trying to get paid sick days, then refusing to extend the child tax credit while preserving tax breaks for private equity billionaires — all things that have or could happen in these final weeks of the party’s control of Congress.

That this is even a possibility illustrates the “let them eat cake” nonchalance among Democratic leaders who believe they can coast on the assumption that GOP extremism makes Republicans unelectable.

That may be true for now — but as long as Democrats insist on almost never using their power to materially improve workers’ lives, Republicans will still have chances to misportray themselves as fight-for-the-little-guy populists. If Democrats are not delivering, those lies are likely to continue reaping the American right more working-class support, bringing the GOP’s fake populists ever closer to the real power they so desperately crave.