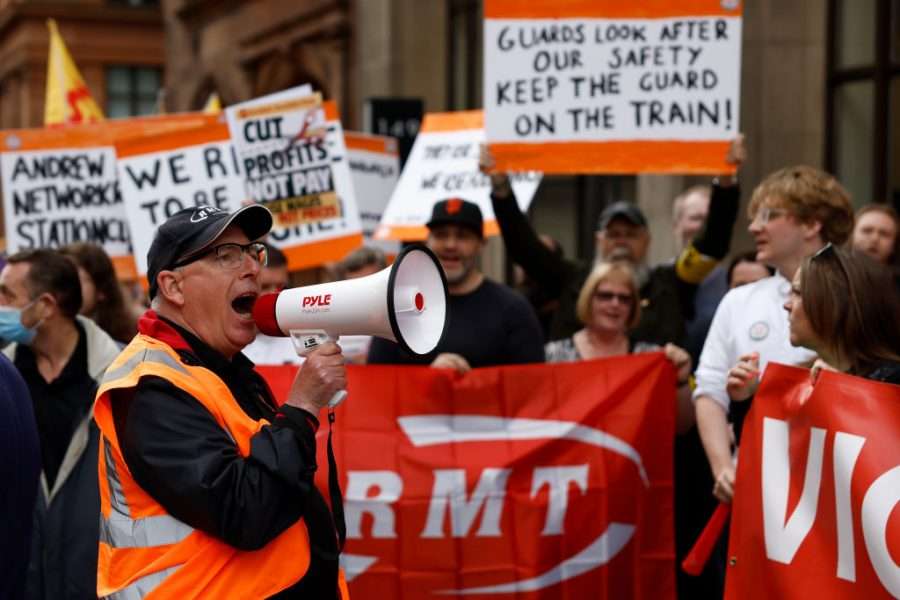 For far too long, railway workers and passengers alike have been shafted by a government hellbent on destroying our railways for the pursuit of profit. Railway workers are fighting back – for all of us.

As Britain’s railway heads into a sixth consecutive month of industrial action, the establishment’s campaign to pit the public against rail workers is escalating.

Ministers have denounced ‘intransigent’ rail unions ‘absolutely intent on causing the maximum disruption to hardworking people’, while the Daily Mail, never shy of putting the boot in on workers, depicted the RMT’s leader as ‘Mick Grinch: The Man Killing Your Christmas’ following the announcement of December strike days.

These attacks are meant to pin the blame for the chaos on the railway on rail staff rather than those who are truly responsible: the government and private train companies, who have repeatedly demonstrated that they are more than capable of trashing rail services by themselves.

The media’s focus on the disruption caused by strike action stands in contrast to their coverage of the government’s shrinking of the railway, which has been implemented without much of a murmur. In the last five years, 674,452 train services have been removed from timetables, reducing overall provision by the equivalent of more than 36 days of non-stop strike action. And, unlike services disrupted by strikes, these reductions are permanent.

The removal of service and the prolonged industrial dispute are owing to the same cause: government funding cuts. After spending £16 billion in emergency pandemic funding to prevent the railway from collapsing, the government wants to ‘recoup’ money spent. The result is a policy of austerity for the railway, with the aim of cutting £2 billion from both this and the next financial year, causing reductions in services made during the pandemic to be made permanent, fare hikes, and attacks on jobs, terms, and conditions.

It is in this context the waste and profit-making facilitated by privatisation—unjustifiable at any time—is particularly egregious. Money that could have been reinvested to improve services or hold down fares is instead squandered through inefficiency or extracted from the railway as profit. In addition to the £725 million annual cost of privatisation, the railway spends £2 billion a year servicing debt.

Earlier this year, the UK’s largest train operator, First Group, which was recently awarded government contracts for running the South Western Railway and Transpennine Express, boasted to investors that profits for the year were ‘ahead of expectation’. In December 2021, the company handed its shareholders £500 million. It’s a consistent pattern in our broken rail sector: the private sector has guaranteed profits while the public sector takes the risk and bears the responsibility if anything goes wrong.

In addition to the fare hikes, the profit-taking, and the removal of services, train companies are also vastly underreporting cancellations, taking advantage of a legal loophole where the Office for Budget Responsibility allows companies to effectively ignore trains preemptively cancelled up to 10PM the night before. Trains cancelled in this way do not count towards official figures but certainly cause disruption, particularly for those who book a train to get to the airport for a flight. Last week, it was revealed that TransPennine had been a repeat offender in this regard.

Chris has worked on the railways for over 16 years, first in signalling and telecoms for National Rail before moving to renewal work. One of the biggest concerns for National Rail employees working in maintenance is the proposed cuts to maintenance scheduled tasks. ‘We check the track, test track equipment, tighten bolts, make sure everything’s lubricated and works properly,’ explains Chris. ‘They want to move away from that and cut 50% of that work. So we’re going to be doing half as many checks.’

Cuts like these will lead to a reduction in track safety, potentially posing a significant risk to passengers. In the aftermath of the Clapham rail disaster in 1988, a crash in which 35 people died, investment in the railways was considered a matter of public safety. Three decades later, though, financial savings are being made for those at the top while railway workers and railway services alike are being squeezed dry. ‘We’re scared that we’re going to return to the days of Potters Bar and some of the big rail disasters,’ adds Chris. ‘We’re very fearful of that.’

On Sunday, the Rail Delivery Group offered rail workers a four percent pay deal, amounting to a real-terms pay cut of nine or ten percent over the next two years. The offer, rejected by the RMT, is also conditional on railway workers accepting vast changes to working practices.

Beyond the reductions in services, and under the guise of modernisation, the government plans to achieve savings through the destaffing of trains and stations. It was these plans which scuppered recent negotiations. Initial discussions had been positive but talks collapsed after the insistence that any pay deal be conditional on destaffing the railway—a last-minute stipulation at the behest of 10 Downing Street.

Coverage of the dispute has focused on pay to the exclusion of these proposals, which include the shuttering of every ticket office in the country. Ticket offices are often presented as a relic from a bygone era, ignoring the fact that they are relied upon by elderly and disabled passengers, and that their presence gives passengers the confidence to travel alone at night.

Similarly, the government’s demand that Driver Only Operation (DOO) be imposed across the network is presented as a technical change rather than the assault on safety and accessibility that it is. DOO would remove the guarantee of a guard from a train, and with it the guarantee that disabled passengers can travel spontaneously, forcing them to book train journeys a day in advance.

The proposals to shut ticket offices and remove staff from trains are more than just threats to the job security of rail workers. They are a threat to a safe and accessible railway. At the same time, train operating companies are blaming problems on the railway resulting from under-staffing, cuts, and the dysfunction of privatisation on staff, as in the case of the failing Avanti franchise, which its owners wrongly attribute to unofficial industrial action.

The government wishes to frame the dispute on the railway as one between staff and passengers, but the truth is that rail staff are on the side of passengers. It’s rail staff who keep a vital public service functioning by running services and assisting passengers, and it is they who are taking a stand against attempts to degrade the service through austerity.

Despite the UK heading into a recession set to last for two years, the government is content to allow the damage—estimated to cost the hospitality sector alone £1.5 billion—to continue. The government is apparently willing to vandalise the railway and sabotage negotiations, because it sees the damage done to passengers, the railway, and the economy as a price worth paying to defeat the RMT.

‘We’ve got a rail industry that isn’t reliable,’ says Chris. ‘We want to work with them to improve it and make it better. But the approach that employers are taking in regards to saving money by doing less maintenance and having less people on the railway is going to lead to a railway that is even less safe and less reliable.’

The RMT has so inspired people because it has made clear that the struggle on the railway is linked to the struggles others are waging against the cost of living crisis. A victory for the RMT would boost the morale of teachers, posties, nurses, and other workers in their fight for inflationary pay rises, and the government understands this too well. That is why they are attempting to portray rail workers as the enemy of passengers and the public, and it is why we must give striking rail workers our full support.

For far too long, railway workers and passengers alike have been shafted by a government hellbent on destroying our railways for the pursuit of profit. Railway workers are fighting back—for all of us.