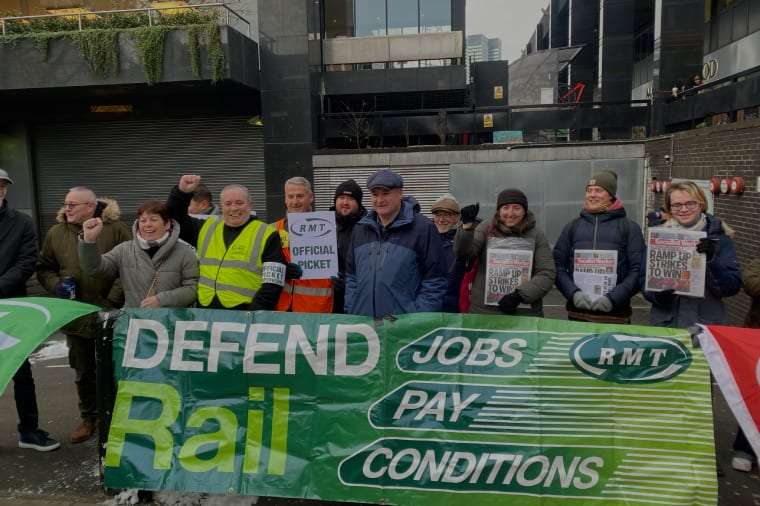 Over 40,000 rail ­workers brought the rail network to a standstill as they walked back out on Tuesday. The strikers—at Network Rail and 14 train operating companies—returned to picket lines to fight for pay and conditions in the first of four strikes that week. More strikes were scheduled over Christmas and in early January.

Network rail and the 14 train operating company workers were set to strike for eight days. Network rail ­workers also planned to walk out for two days from Christmas Eve to block ­maintenance work.

Paul, a Southeastern trains RMT union member, told Socialist Worker that it was great to be out for “more than just a couple days”. He added, “This is how we will win. The news channels say that strikes are ruining Christmas, but all we have had is support on the picket lines. People see that we have been left with no choice but to strike and it’s the Tories who can end them.”

Network Rail worker Andy works in east London. He told Socialist Worker, “The bosses need to stop waiting around and make a proper offer. We aren’t going to stop any time soon. This disruption could stop from tomorrow if the Tories wanted it to, but they want to see people suffer over Christmas.”

The Tories will be happy to blame strikers for services being shut over Christmas despite ­intervening to block deals. The latest round of strikes follows Network Rail workers rejecting a 5 percent pay rise offer for 2022 with a further 4 percent for 2023. Even when added together, the two-year deal is far below the rate of inflation—equating to a significant pay cut.

This offer was conditional on workers accepting thousands of job losses, a 50 percent cut in scheduled maintenance tasks and a 30 percent increase in unsocial hours. It was rejected by 64 percent on an 83 percent turnout. Andy argued for “big meetings and protests, like the Royal Mail workers did, that raise people’s sights”.

“That’s how we get people who would vote for the deal to see how the strikes can’t just be over individual issues—but part of a bigger fight,” he said. The RMT members have also rejected an even worse deal from the train operating company bosses.

Bosses offered 4 percent for 2022 and 2023 if workers accepted vast changes to working practices, huge job losses, driver only operated trains and ticket office closures. But it’s not enough to reject deals and then maintain the same strategy.

The Tories are standing firmly behind rail bosses and have made available £300 million to bail them out for losses due to strikes. More strikes show that the union means business and can hit the bosses harder. But intermittent strike days take momentum away from the struggle—and leave room for RMT union leaders to weaken.

In 2023 rail workers need to push for further escalation, bigger action and an all-out strike. That can win a real pay deal from the bosses—and show the Tories’ who has the power.

Over 1,000 rail cleaners employed by outsourcing companies Churchill, Atalian Servest and Mitie were set to strike for £15 an hour, sick pay, and better holidays and pensions. They planned to walk out on 22, 23 and 31 December.

One worker employed by Atalian Servest told Socialist Worker he and his colleagues are looking forward to striking. He said, “We have seen cleaners at Churchill strike, station workers strike and drivers.  Now we will also. What we’re asking for is reasonable—our jobs are very important.”

Some of the companies have made profits over £100 million on the back of paying low wages. Now the workers, in the RMT, are striking and protesting for pay and conditions that are essential as inflation soars.