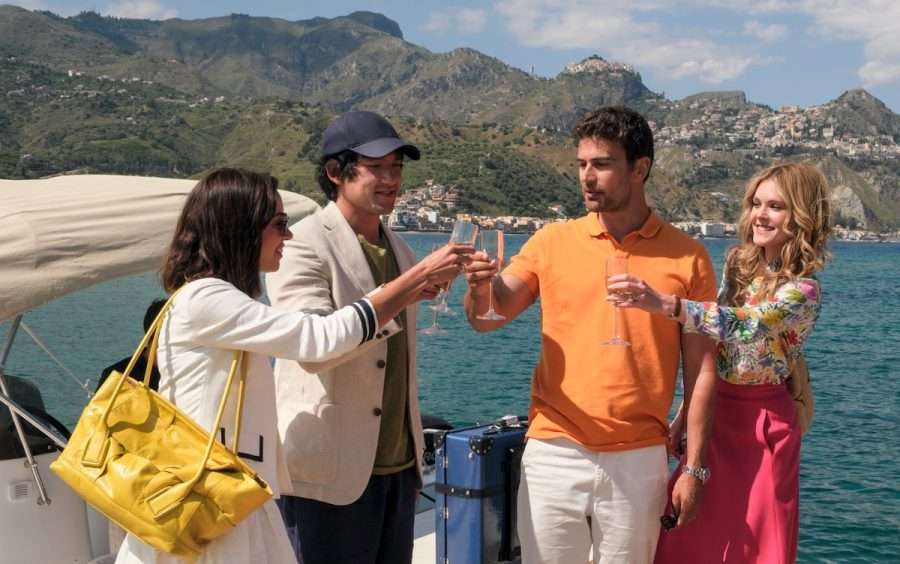 The second season of The White Lotus, HBO’s propulsive satire, had sex on the brain more than anything else. But it never lost sight of the razor-sharp class critique that also animated season one.

In a cultural moment where limp “eat the rich” sentiment is lacquered over any media that would like to appear progressive, The White Lotus is the rare production that actually merits applause. (HBO)

On Sunday night’s season finale of The White Lotus, creator Mike White proved two things: first, that there is near-animal satisfaction in watching Jennifer Coolidge brandish a gun; second, that he remains one of the sharpest satirists on American television.

In a cultural moment where limp “eat the rich” sentiment is lacquered over any property that would like to appear progressive in the long wake of Parasite’s Best Picture Oscar win, The White Lotus is the rare production that actually merits applause. In its first season, the HBO anthology series used a fine brush to paint its elite vacationers, rather than portraying them as contemptible caricatures so grotesque that no reasonable person could see them as analogues — thus hitting much harder than blander, blunter class satires like this year’s Triangle of Sadness.

On its surface, season two shies away from class to zero in on sex. Yes, the guests at the titular luxury resort — located on the Sicilian coast this time instead of the Hawaiian Islands — are still rich, but, from the jump, White puts less emphasis on the divide between them and the hotel employees laboring to keep them comfortable. Instead, he pokes at their carnal anxieties and improprieties. There’s a grandfather-son-grandson trio, each with generation-specific woman troubles; season one’s spacey Tanya (Jennifer Coolidge), who worries her husband might be having an affair; and a group of toned-and-tanned millennials (played by Will Sharpe, Aubrey Plaza, Theo James, and Meghann Fahey) that exudes fraught sexual tension from the moment they appear in the same frame.

Early on, a White Lotus employee explains the Sicilian legend of the testa di moro, to which several porcelain busts throughout the resort allude: in the twelfth century, a dark-skinned boy seduces a fair-skinned girl while visiting her villa, only to reveal that he has a wife and children back home. In response, she cuts off his head and turns it into a planter. It’s a wry bit of foreshadowing — the show is a murder mystery, so we know people die — and also a misdirection. Plenty of sexual transgressions do pile up by season’s end, but few players are punished as swiftly for their sins as that long-ago philanderer.

The richest example is in the season’s central foursome, whose dynamic calls to mind an excerpt on “the sexual question” from Italian communist Antonio Gramsci’s 1934 essay Americanism and Fordism. “The new type of man demanded by the rationalization of production and work cannot be developed,” Gramsci wrote, “until the sexual instinct has been suitably regulated and until it too has been rationalized.”

Ethan (Sharpe) and his new wife Harper (Plaza) arrive in Sicily with Ethan’s college friend Cameron (James), a snake-smiled venture capitalist, and his wife Daphne (Fahey). Cameron and Daphne have been bouncing around luxury resorts for years, while Ethan and Harper are taking uneasy steps into the club after a recent windfall from the acquisition of Ethan’s company. The wealthier couple appears to live in a perpetually handsy honeymoon phase; Ethan and Harper haven’t had sex in months.

Slowly, it comes out that Cameron and Daphne have come to a (possibly unspoken) marital agreement that belies their bliss. “You have to do whatever you can to make yourself not feel like a victim,” Daphne tells Harper at one point, unsubtly hinting about how she copes with her husband’s flagrant infidelity. There’s a steeliness to her delivery and a hint of sororal care. “This is the world you’re entering,” she seems to say. “Hold on tight.”

When Harper first learns about the arrangement, she places herself above it: “I told you they were miserable,” she gloats to Ethan, finding satisfaction in their own sexless but ultracommunicative dynamic. A few days later, though, she drunkenly cheats on Ethan with Cameron, unable to choke down her neglected libido any longer. In response, it’s implied, Ethan returns the favor with Daphne.

The meeker couple seems shell-shocked by the whole ordeal until Cameron and Daphne spot them at dinner the following night and give a smiley toast “to friendship,” their partner-swapping completely unacknowledged. Ethan and Harper then return to their room and have sex for the first time all season — so passionately, in fact, that they topple and shatter the testa di moro bust in their room. When we see them next, they’re grinning in each other’s arms at the airport, waiting to fly back to America. The transformation is clear: they’ve settled into the same echelon as Cameron and Daphne and acclimated to the sexual games required to keep them there. Impulses? Regulated and rationalized.

Not everyone, though, is lucky enough to treat sex as a game and emerge unscathed. Take Portia (Haley Lu Richardson), the hapless, underpaid assistant to Jennifer Coolidge’s near-billionaire Tanya. Lamenting her digitally mediated late-millennial life, Portia throws herself into an affair with a tatted Essex sex bomb (Leo Woodall) as soon as the opportunity presents itself. What starts as a hot-but-harmless bad-boy fling devolves when Portia discovers that her paramour gets down with his so-called uncle, for whom he is — oops — a hired rent boy–slash–hitman. In disclosing that she knows the truth about their arrangement, Portia nearly gets herself killed.

Compare that to the interplay between Lucia (Sabrina Tabasco), a local sex worker, and Albie (Adam DiMarco), a recent Stanford grad visiting the resort with his wealthy father (Michael Imperioli) and grandfather (F. Murray Abraham). Albie falls into a relationship with Lucia, who tricks him into thinking she’s a damsel in debt to a dangerous pimp. Determined to be a “good man” and set Lucia free, Albie asks his dad for €50,000, which Lucia takes and runs with, leaving Albie naked and alone in bed. He is momentarily deflated, but (as he points out to his dad) a life-improving paycheck for Lucia is hardly a life-ruining loss for his own family.

So he shrugs it off and pursues Portia at the airport, who’s poorly disguised in sunglasses and a headscarf as she runs for her life. Both he and her played with fire, and both got burned, but only she — absent the boost of generational wealth — finds herself in any real danger.

Myths like the testa di moro are powerful, White seems to say, and money can mute them. Tanya, the one wealthy character to suffer any major consequences all season, does so entirely by her own hand. In the season’s best, bitterest joke, she miraculously uncovers a conspiracy to kill her and seize her fortune at the last minute, guns down the men who are about to carry it out, and then accidentally leaps to her death once she’s in the clear.

It’s a perfect, pointed end to a season that had millions of viewers speculating whose corpses washed ashore in episode one. Would it be Harper or Cameron as penance for cheating? Albie, killed by Lucia’s pimp? None of the above. The only thing that can bring a head-in-the-clouds tourist down on their luxury getaway, White says, is themselves.