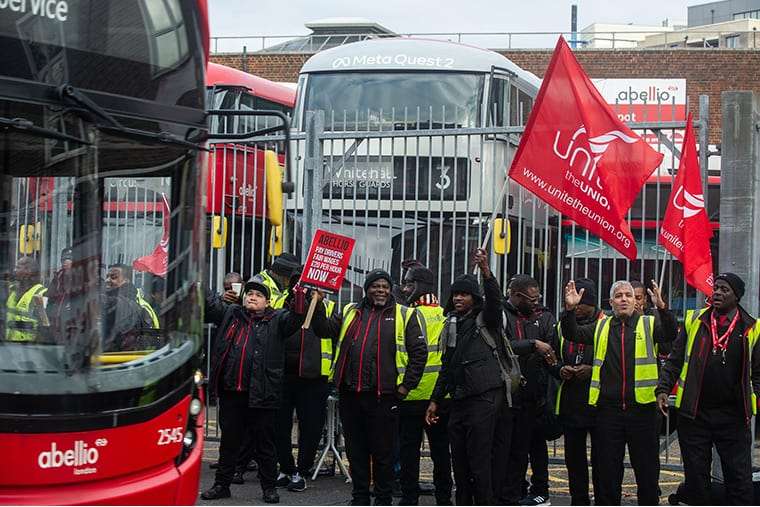 Abellio bus bosses in south and west London suggested they’d make a new pay offer in talks with Unite union officials as Socialist Worker went to press. But on the picket lines, no one was holding their breath.

The determination of the 950 strikers is clear and they were set to call ten more strike days between 24 December and 26 January. Effective picketing has meant that only 19 out of about 150 of Abellio’s buses were on the road during a strike in early December.

Some of the buses that managers moved out overnight to be used by agency workers remained empty all day. Workers said “a sense of community” had developed on the picket line during the strike. They said several strikers remained on picket duty hours after their time on the rota had finished.

The strike seems to be putting pressure on Abellio bosses. It’s important that workers keep up the strike schedule despite offers of talks, which bosses often use as a tactic to deflate a campaign.

A vote for new tube strikes —but still no dates called

London Underground workers have voted to keep striking over job cuts, pensions and working agreements. But the RMT leadership hadn’t announced any strike dates as Socialist Worker went to press.

Over 91 percent voted yes in the ballot on a 53 percent turnout, showing tube workers won’t give up their fight to save 600 jobs and pension entitlements. But RMT union leaders called too few strikes over the previous six months, allowing bosses to ride out the sporadic disruption.

They should announce a programme of action, in unity with other strikes wherever possible.

Some 350 Great Western Railway (GWR) engineers were set to strike on Thursday 15 December as they suffer a third annual pay freeze. The workers previously walked out in October.

Despite GWR’s parent company First Group making pre-tax profits of £654 million in 2021-22, the company is refusing to offer the workers a pay rise. The striking workers are based at depots and stations in London, Exeter, Tiverton, Plymouth, Swindon, Swansea, Reading, Penzance, Oxford and Bristol.

The Unite union said it would call more dates if a resolution isn’t soon found.

Around 150 bus engineers employed by Go North East were set to strike between 19 and 25 December. The Unite union members have rejected a 10 percent pay increase—a real terms pay cut.

Low paid security staff for the Eurostar train service were set to walk out for four days in December in a fight over pay.

The over 100 members of the RMT union—some of who are paid just £10.66 an hour—are contracted out to facilities management company Mitie. Strikes were set to take place on 16, 18, 22 and 23 December.