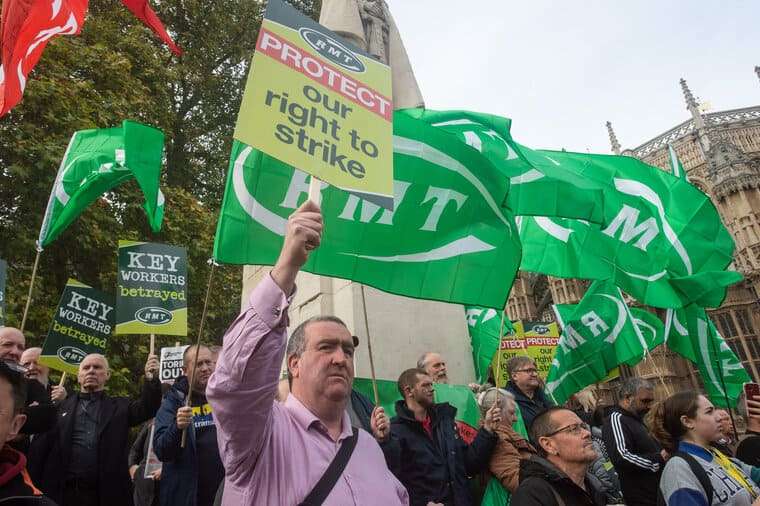 Rail workers in the RMT union protesting in November. Now unions must mobilise against the threat of the army breaking strikes (Picture: Guy Smallman)

We haven’t seen a Christmas and New Year like this for decades. It’s brilliant to see the news dominated by strikes and resistance. Hundreds of thousands of workers are right to fight back and not pause for some sort of phony “truce”. For far too long working class people have been persuaded by trade union and Labour Party leaders that they have to accept their lives getting worse. Now many workers are standing up and pushing back.

Each strike has its specific demands, but behind all of them is the issue of who will pay for the crisis of the system. These are intensely political strikes about what sort of society we want to live in. Bosses and Tories say workers must accept massive pay cuts, job losses and worse conditions. That’s designed to give a boost to profits and to pay for tax cuts for the rich and their corporations.

Ministers tell nurses to swallow a 10 percent pay cut in real terms while lifting the cap on bankers’ bonuses. Royal Mail workers face the prospect of “gig economy” insecurity and poverty wages. Yet chief executive Simon Thompson grabbed a pay and perks deal worth £753,00 last year and shareholders have looted £2 billion since 2013.

The state has mobilised to break strikes. In mid-December the government said that soldiers would be sent into hospitals across England and Wales to undermine ambulance strikes. They won’t take emergency action to save the NHS, but they can rush into crisis mode when they want to defeat strikes. Other soldiers were ready to cover the work of striking civil service workers who do passport checks.

This is the “neutral” apparatus of armed forces, cops and spies showing its loyalty is always to the enemies of working class people. They are defending a Britain where there are a record 177 billionaires with a wealth of £653 billion. Meanwhile millions of people freeze and go hungry because they have no money. No worker should cooperate with state strike‑breaking plans, and unions should try to block them.

It’s scandalous that the union leaders haven’t called for walkouts when the troops go in. Defending union rights means defying these assaults. And there also has to be resistance if the Tories go ahead with their latest planned round of anti-union laws.

The government has already started the process of passing a new law implementing minimum service levels during transport strikes. It means that during such strikes, unions have to guarantee that many services will still run. They’re ripping apart the right to take action. Shamefully, a Labour Party spokesperson said they wouldn’t pledge to repeal the measures if they are in government.

Every worker, every campaigner, every student and everyone who hates the Tories has to give solidarity and, if possible, be on the picket lines over this period. The more there is collective support for the strikes, the more those involved will feel able to keep fighting until they win. As managers try to mobilise scabs and agency workers to smash strikes, pickets need to be as large as possible and as militant as necessary.

Every act of solidarity matters. But there is also a battle inside the strikes about what strategy to adopt. We are seeing inspiring strikes under wholly inadequate leadership. The bosses and the government won’t back off unless they are plunged into a deep crisis. The stakes are very high. For the Tories to back off the NHS workers, or to concede a pay rise that matches or beats inflation, would lead to howls from the right wing press and Tory MPs.

So, a series of intermittent and isolated strikes won’t defeat rail, post or NHS bosses. The strikes need to draw in more workers, and to escalate to all-out action. Union leaders should also organise united strikes on the same day. Over half a million workers could be out together now even under the anti-union laws. Why are the strikes fragmented and divided?

Some union leaders play with the idea of a general strike. That would be wonderful, but they don’t even mobilise now when they can. One danger is that the magnificent fighting spirit we’ve seen on the picket lines is thrown away for deals far below the rate of inflation. Or for job cuts so long as they are “voluntary”.

Where are the nurses’ strike pickets?
Read More

The resurgence of 2022-23 needs to be remembered as an era of victories, not retreats presented as steps forward as in the BT Group deal. Rank and file workers need to organise their own initiatives, and to push their leaders into more action. There must be no truce, no retreats and no suspension of strikes by union leaders in response to intimidation. Nor should action be paused for talks.

Our side can win. And success in each individual battle has to be part of building a socialist alternative to a world of inequality, climate chaos, racism, poverty and war. This is a time of hope. Let’s turn that hope into a reality.