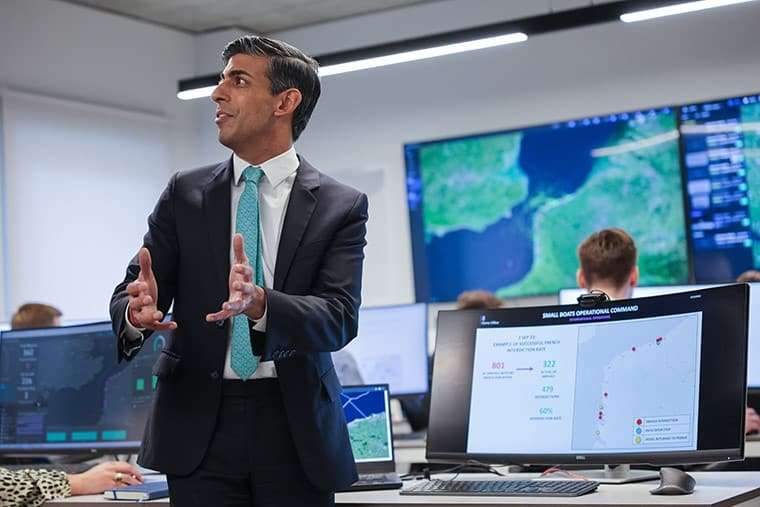 At least four refugees died while crossing the Channel on Wednesday morning. And it’s the Tories who murdered them.

The boat carrying almost 50 migrants started sinking at around 3.05am. It is believed to have been launched at 2am and then had a puncture.

The day before the tragedy, Rishi Sunak declared war on refugees crossing the Channel, announcing plans that would only lead to more fatalities. If you close off routes and make it harder to come to Britain, then people take bigger risks and rely more on people-smugglers.

The temperature early on Wednesday morning was 1 degree Celsius but would have been much colder in the water. Pictures of those being rescued included a man in a T-shirt.

In the Commons Sunak called it a “tragic loss of human life”. Labour leader Keir Starmer chimed in, “It’s a reminder that the criminal gangs running those routes put the lives of the desperate at risk and profit from their misery. They must be broken up and brought to justice.”

The people who need to be brought to justice are the Tories. “If you enter the UK illegally you should not be able to remain here,” Sunak told the Commons on Tuesday. He said refugees who do not come through “official” routes—inevitably the large majority—would be detained and then pushed back to where they had come or another country.

Home secretary Suella Braverman sent her “heartfelt thoughts” to the Channel victims. But she has deliberately ramped up the racist narrative against “illegals” in boats. Braverman is even happy to use far right language, claiming an “invasion” in the Channel.

The Tories have refused to open legal routes into Britain. Last month Braverman couldn’t even describe how refugees can claim asylum “legally”. Currently, the only legal routes to Britain are for Ukrainians and Afghans—with the Afghan schemes still barely off the ground.

Just over a year ago, 31 refugees drowned after French and British coastguards refused to assist a sinking boat. Charity Care4Calais said, “Both then and now, these deaths are wholly unnecessary and preventable. By failing to act, our government has blood on their hands.

“The people we work with have not only suffered the very worst horrors in this world—conflicts, human rights abuses and torture—they have been brave and resilient enough to escape and survive incredible journeys to come here and ask for our help. And yet we deny them.”

Stand Up To Racism said, “When Braverman and Co talk of a ‘hostile environment’ for refugees and migrants, these deaths are what it means in reality.”

Sunak introduced a five-point immigration plan on Tuesday. It is scapegoating, designed to divert attention from the cost of living crisis and shore up support for the government.

As part of the plan, “the vast majority” of Albanians will be declared “clearly unfounded”, and deported. The Tories are spreading a false narrative that as a “safe country” people from Albania cannot be refugees.

Sunak also plans to cut down on the use of hotels to house refugees, not because the conditions are dire, but to slash costs. More basic accommodation—holiday parks, disused student halls and surplus military sites—will be used.

The Unified Small Boats Operational Command will also bring together the National Crime Agency and Border Forces to stop crossings and traffickers. And there will be a 50 percent increase in raids on undocumented workers.

Sunak pledged to “abolish the backlog of initial asylum decisions by the end of next year”. Some 117,000 cases are outstanding relating to 143,377 people.

More than 80 percent of asylum applications are granted by the Home Office. Yet the Tories continue to pit “genuine” and “fake” refugees against each other.

The solution isn’t more border controls. Offering safe passage to those seeking asylum means no one has to risk their lives or rely on people smugglers who profit from borders. And it shouldn’t matter where refugees come from—no one deserves to die in freezing water attempting to reach safety.

The court judgment on the challenge to the government’s policy of deportations to Rwanda will be handed down at 10.30am on Monday. Go to Stand Up To Racism on Facebook for events around this.