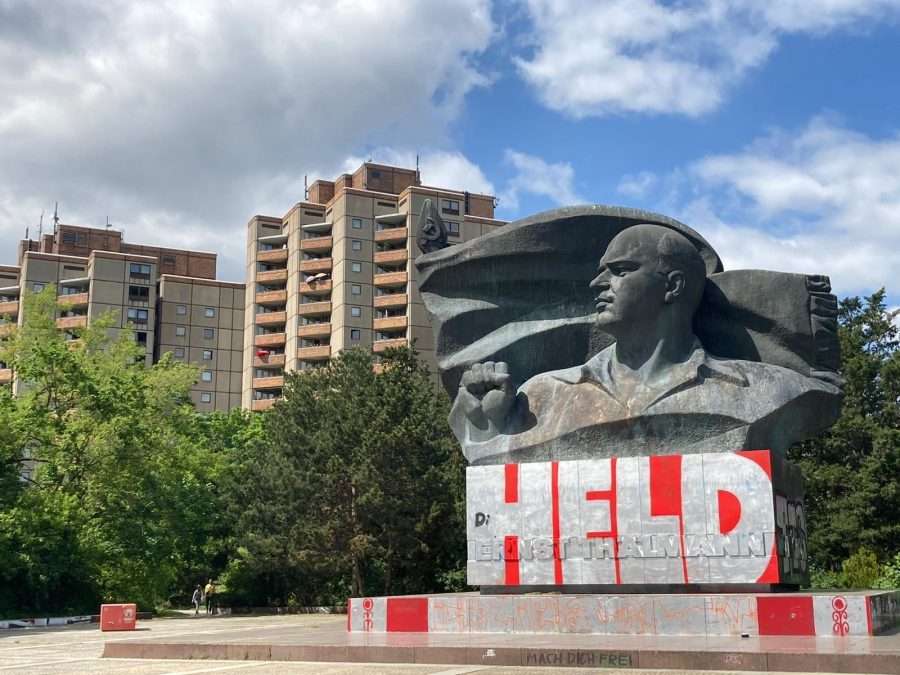 Much of the art produced in East Germany fell into oblivion after reunification. The Art Archive in Beeskow brings to light some of the forgotten works, highlighting the debates over what it meant to create a socialist culture.

The Bitterfelder Weg programme, which was conceived and implemented from 1959 to 1964, was possibly the most famous of all cultural experiments to emerge from the German Democratic Republic (GDR). The comprehensive cultural renewal programme has frequently been viewed as an ambitious experiment to revolutionise culture from below. It aimed to overcome the ‘existing separation of art and life’, through fostering more collective forms of creativity by cultural producers and workers. A key feature of the programme was the attempt to place artists and writers in factories and other sites of mass production, to support workers in artistic activity.

By April 1964, the Bitterfeld Weg had been abandoned, and the cultural arms of the state were instead given the task of promoting political education oriented towards socialist consciousness and key figures in socialist history. Much of this was funded by the GDR Kulturfond, which acted as the commissioning body for most of the works through awarding well-paid commissions to artists in the Association of Visual Artists to create works for public institutions. Through this programme, a vast collection of publicly commissioned arts was amassed and adorned public canteens, youth organisations, public trade unions, and government buildings.

A Stamp of Wenn Kommunisten träumen (When Communists Dream) by Walter Womacka in the Palast der Republik.

A month before reunification, Herbert Schrimer, the last Minister of Culture of the GDR, and Walter Patig, the last director of the GDR Kulturfond, were concerned with what would happen to the state-owned and institutional art collections once they no longer existed. At this time the artworks were dispersed all over the GDR in the institution that they were commissioned for, and there was a fear that the work would fall into the hands of private collectors and no longer be publicly accessible, let alone owned by the people. This movement of public assets into the private sector was a key and overlooked feature of renunciation in Germany.

So Schrimmer and Patig established the Art Archive in Beeskow in 1994, which to this day preserves around 23,000 art objects from the GDR; from huge mural-like panel paintings, bronze busts, and still lives, to student projects, photography, and ceramics. Schrimer expressed his motivation for founding the archive was ‘out of a feeling of responsibility for these works of art, regardless of their quality… they are vivid evidence of life in the GDR and of the connection between society and art.’ The collection indeed shows the breadth of aesthetics in GDR commissioned art despite a very much regulated system of state patronage, as well as how art permeated much of public and everyday life in the GDR.

Much of the art produced in the GDR was almost wholly discredited or fell into oblivion throughout the decades that followed reunification. In 1992, West German painter Georg Baselitz dismissed all East German artists as ‘assholes’ and ‘propagandists’, and there was an ongoing debate about whether East German artists should be integrated into German museums. Up until the last five years or so, GDR cultural production was seen as socialist kitsch rather than serious artistic work; however, almost a generation on from the fall of the GDR, there has been something of a resurgence of interest around cultural production in East Germany. The Art Archive at Beeskow has been key in promoting and preserving this legacy, along with its sister organisation, the Museum of Utopia and Everyday Life in Eisenhüttenstadt.

Stamp of Am Strand by Walter Womacka.

When entering the archive in Beeskow the room is full of grey metal chests holding drawings, prints, and photographs. Above them hangs a huge painting, Aus dem Leben Ernst Thälmann (From the Life of Ernst Thälmann) by Christian Heinze, which was commissioned in the early 1980s to be hung in the canteen of the Free German Trade Union Federation (FDGB) in Rheinsberg. A communal table in the centre of the canvas shows people from the GDR living a common life, above them a crowd of people, and at the centre, Ernst Thälmann, former leader of the Communist Party of Germany (KPD), with his fist raised high. Around the edges of the painting we see the Red Army defeating fascism, the destruction of Berlin, and the building of industry in the GDR.

Due to the fact that most works in the Beeskow Art Archive were owned by the FDGB and other mass institutions, during the GDR they remained in the public sphere (as opposed to private collections). Art was not just confined to the gallery or museum, but seen as integral to the socialist project; so sharing lunch with Ernst Thälmann in the canteen was very much part of the fabric and material culture of life. This can be seen in stark contrast to the way that figures like Thälmann are seen in Germany today—where recently a CDU party group in Berlin applied to the district assembly to demolish and melt down the 15-metre bronze statue of Thälmann in Prenzlauer Berg, due to the Russian invasion of Ukraine.

Printout of all the panels of Proletarier aller Länder, vereinigt euch! together by Willi Sitte.

Hanging on the wall, right next to Aus dem Leben Ernst Thälmanns, were various versions of probably the most famous painting in the GDR. Far from portraits of Thälmann, bronzes of Lenin, or numerous tributes or Rosa Luxemburg and Karl Liebknecht, this intimate everyday picture struck a chord with the population. Am Strand (On the Beach) by Walter Womacka was painted in 1962 and was presented to Walter Ulbricht by the Politburo of the Central Committee of the SED on his 70th birthday. The picture shows two young people, perhaps not yet a couple, sitting on the beach, their middle fingers touching in an uncertain gesture of adolescent love.

Very much in a Socialist Realist style which elevated everyday life under state socialism into a ‘revolutionary romanticism’, the painting through its circulation became a key to the people in the GDR’s image of themselves. The painting was reproduced more than three million times as an art print, postcard, and art calendar, as well as a stamp in 1968, which had a circulation of twelve million.

Womacka was very much a ‘state artist’ and a member of the SED who was commissioned to do many commissions in prominent GDR buildings, such as Unser Leben (Our Life) for the Haus des Lehrers (The House of Teachers) on Berlin’s Alexanderplatz, and the panel painting Wenn Kommunisten träumen (When Communists Dream) was hung in the Palace of the Republic. The latter was also reproduced as a stamp in 1981. The dramatic shift in style between Am Strand and Wenn Kommunisten träumen shows that even for ‘party artists’, art was neither uniform nor simple functional within GDR socialism.

One of the most spectacular and mildly grotesque pieces of the archive was a huge multi-canvas piece by renowned GDR artist Willi Sitte, entitled Proletarier aller Länder, vereinigt euch! or Workers of the World, Unite! Each section, mounted on sliding archival storage, was revealed individually due to the size of the piece. First came Marx; a lightning bolt grasped in one hand and the other lifted high as a fist radiating rainbow colours, below a small refracted side portrait of Lenin.

The next panel brings a sharp contrast between the austere sepia portraits of the figures of communism in Germany (Clara Zetkin, Rosa Luxemburg, Karl Liebknecht, and Ernst Thälmann) which adorn the top of the picture; under this a baroque mass of bodies, muscles, and guts. The people are tearing themselves down from the cross and heralding a new dawn with golden trumpets. Sitte had deserted the Wehrmacht in 1944 and briefly went and fought for the Italian Partisans, and this style evidently resembles Italian Baroque.

The final panel continued this lineage of communist figures, with a young Marx and Engels in the left hand corner all the way through to Kautsky; underneath the canvas is grey with lumpen naked figures shrouded in cloth, newspapers emerging and falling from the grey background. They both form a revolutionary base, reminiscent of Willi Neubert’s Die Presse als Organisator (The Press as Organiser) mural on the Presse Cafe, in which the communist press takes on an activity and integral part of the revolutionary project.

Pieced together, these almost triptych-like murals portray the progression of revolutionary consciousness and mass politics from the beginning of the communist movement to what is assumed to imply the state socialism of the GDR. But far from the perhaps drab realism that one might associate with ‘socialist’ art, the end panel shows a psychedelic mass of colour, the power of collective action and the strength of people rising. Interestingly, though, this was not deemed a fitting piece by SED officials to be displayed in the party school in Köllnischer Park. Due to the prevalence of naked people in the painting, the piece was hung at the top of the main staircase in the school and covered by a curtain. Sitte objected to it being covered up and attempted to buy the painting back through a public campaign; after much conflict, the piece was permanently displayed.

This example of the top-down sanctioning of even their most prominent artists (from 1974 to 1988 Sitte was President of the Association of Visual Artists of the GDR) showed the rhetoric of the Bitterfelder Weg had become highly institutionalised. However, like many of the contradictions that come out of the GDR, the conditions in which art was produced there cannot simply be dismissed. The art in the Beeskow Art Archive emerges not just as a top-down expression of social values, but as a site of struggle and negotiation around what it means to create socialist culture. The collections in Beeskow are testament to the huge variety and vibrancy of art that came out of GDR, and their work is key to reasserting its artistic and cultural heritage back into public view.