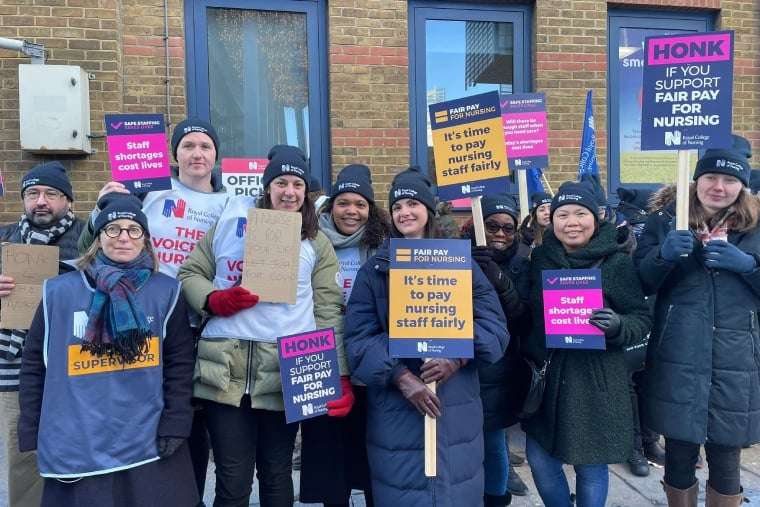 Tens of thousands of nurses hit the picket lines across England and Wales on Thursday in an explosive strike over NHS pay. The RCN nurses’ union plans another walkout Tuesday of next week.

The sight of so many buoyant strikers should send a shiver of fear down the Tories’ necks—and give strength to other health workers itching to take action.

Large groups of pickets and their supporters gathered at dozens of hospitals. They are determined to win more than the miserly 4 percent average pay increase the Tory government imposed on them.

St. Thomas’ Hospital is just a stone’s throw from parliament. Nurses on picket lines there described their anger at the Tories.

“Steve Barclay, the health minister, has said that the issue of nurses’ pay is not his responsibility. If it’s not his issue, then whose is it?” asked striker Matt. “I think the Tories expect nurses to work purely on goodwill alone, but goodwill can’t heat a house.”

Nurse practitioner Jacinth said she was striking to “get her voice heard.” “All of us staff are taking on extra hours, but it’s still not enough,” she said. “It’s not enough to bring waiting lists down. And even if we take on extra hours, our pay doesn’t cover what we need to live.”

“Life is getting harder and harder. Everyone is feeling stressed and low at the moment. “

Across the River Thames from St Thomas’, workers at the Royal Marsden hospital gathered for a lively picket line.

Paulina is a critical care nurse there. She told Socialist Worker that this strike is about pay, but also about a severe shortage of staff. “A lot of nurses here leave because of stress. And I can completely understand why,” she said.

“Most people wouldn’t endure the conditions we have to work under for the pay that we get. I don’t blame people for not wanting to train as nurses. Why spend half your life paying off your student debt for so little reward?”

Paulina added that what adds to the strain is the way nurses are seen by the bosses and those in charge. “We’re highly trained, but we aren’t valued,” she added.

Strikers were furious about the way they have been portrayed in the press and by politicians. Ruth also works in critical care. She said, “They say we are irresponsible and that we’ll let patients die. All of this is to try and attack our right to strike.”

Everyone Socialist Worker spoke to at the Marsden picket line said their patients supported the strikes. Almost every passing driver honked their horn while passers-by clapped as they walked past—and strikers were brought trays of cakes and coffee by supporters.

Workers chanted, “What do we want? Safe staffing. Who’s it for? You!” Nurse educator Jacob told Socialist Worker this strike needs to be part of a bigger movement.

Bristol RCN member Janice says they’re striking because “we want to provide a service that’s adequate for our patients”.

“I think more people need to come out on strike if they can’t afford to live – especially in the health service,” he said. “Everyone should mobilise, from ambulance workers to cleaners. Everyone should strike.”

And outside London, solidarity was the order of the day too. Striking postal workers were particularly eager to show their support for the nurses. Many Royal Mail pickets held up signs to show their backing.

At Highbury hospital in Nottingham, a group of postal workers in their trademark pink CWU union tabards arrived early to help nurses set up their picket line. Union rep Daz Bulwell told Socialist Worker he was “delighted to join in” and that “we’re all in it together”.

The postal workers’ gesture was returned later when a large group of nurses marched down the road to join the Royal Mail picket line.

RCN rep Kelvin at Highbury said the strike was “going great”. “We’ve had a good turnout. It’s phenomenal,” he said, gesturing toward scores of nurses on both sides of the road. There were similar scenes at nearby City hospital, with a picket stretching around the building.

Managers at Derriford hospital in Plymouth tried to stop nurses walking out to join the strike. But dozens joined the picket lines anyway, with the support at the 8am shift change described as “huge”.

Outside the Bristol Royal Infirmary, striker Janice told Socialist Worker she was on strike to defend the NHS. “I’m here to ensure we can provide a service that’s adequate for our patients. We haven’t been able to do that in such a long time,” she said.

Selena, a nurse and Unison member at the hospital, joined the RCN’s picket line as it swelled into the hundreds. “We voted by 91 percent to strike too, but didn’t meet the threshold. I’m saying to my union leaders we should re-ballot because all of us should be out together,” she said.

Patient safety was a big theme among strikers. Speaking amid a cacophony of supportive car horns, RCN member Emma at Newcastle’s Royal Victoria Infirmary told Socialist Worker, “I am striking not just for myself but for colleagues and patients.”

“We can’t stand by anymore” – striking RCN nurse Tony has a message for the Tory government #RCNStrike #FairPayforNursing #FairPayForNurses pic.twitter.com/Z6CW5CvGXL

She said there were some areas of the hospital that have huge problems with recruitment. “There are staff that never have the full complement of safe staffing levels,” she said.

“They are exhausted, they are burnt out. And they come in and have to spend the first part of the shift showing strangers around who have filled in for the care. It’s unsafe to be doing that and it’s not fair on the staff.”

Emma is right. This strike is not only about pay. It’s a battle to ensure that the NHS has a future. That’s why ambulance workers and others plan to strike on Wednesday of next week, and again on Wednesday 28 December.

The crucial task for every socialist now is to turn the overwhelming sympathy for striking health workers into action. We need more unions to pile in behind the nurses and ambulance workers. The Christmas picket lines should be boosted by hundreds of local trade unionists bearing gifts. More strikes are the present everyone suffering under this government urgently needs.

There will be a further update to this story later today (Thursday).