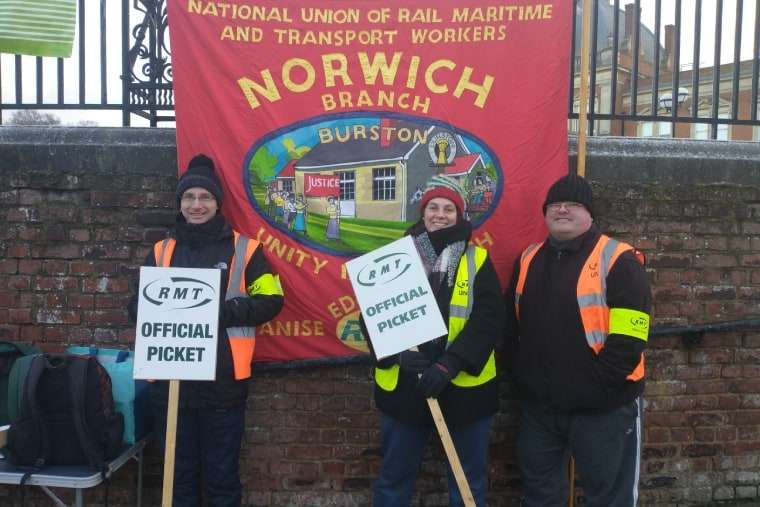 RMT union members on the picket line in Norwich on the first day of the rail strike (Picture: Socialist Worker)

A strike by 40,000 rail workers hit hard on Friday. It marked the beginning of the second 48-hour walkout this month by RMT union members at Network Rail and 14 train operating companies.

On a Greater Anglia picket line in Norwich, workers said they “remain determined” and have received solidarity from other groups of strikers. One train guard told Socialist Worker, “We’ve been given cash donations and croissants this morning, striking nurses and postal workers have visited and we’ve joined them.

“All our jobs are under threat, they want to de-staff so many areas. This strike is also about staffing, job security and safety—not just pay. Cutting staff means passengers and staff will get hurt.”

The train operating companies have only offered a pay increase of 4 percent this year and 4 percent next year. And—in exchange for these real terms pay cuts—workers would have to accept huge attacks on jobs and terms and conditions.

Karl, a rail worker in Liverpool, told Socialist Worker, “It’s all part of their dismantling of the railway as we know it. Fewer staff, booking offices, station staff, maintenance staff all means a poorer service for passengers and a drastically less safe and accessible service.” He added, “RMT members will continue to take this dispute onto the picket lines.”

Network Rail workers rejected a pay deal of 5 percent this year and 4 percent next. Birmingham-based worker Dan told Socialist Worker, “The strikes going on at the moment show that we refuse to be the ones to pay for yet another crisis.”

The Tory government has blocked improvement on this offer, but they’re hoping to wear down the union and push through a bad deal.

On the eve of the strike, the RMT attended talks convened by rail minister Huw Merriman that included Network Rail and the Rail Delivery Group. The union says “minister requested further talks between RMT and the employers in order to find resolutions.”

The TSSA and Unite unions have accepted the Network Rail deals—and ministers hope RMT can be forced into a deal. But workers shouldn’t accept below-inflation pay rises or attacks on their jobs, terms and conditions.

Pressure is still growing across the railways. The RMT plans further strikes at Network Rail from 6pm on 24 December to 6am on 27 December. Rail workers across Network Rail and the 14 companies are set for two 48-hour strikes from 3 January and 6 January.

Train cleaners set to strike for three days this month and workers on the Elizabeth Line in London are set to walk out on Tuesday. Elizabeth Line worker Loz told Socialist Worker, “We are striking to demand recognition and bargaining rights.

“The two year below-inflation pay deal offered is an insult to us workers, considering we are already paid drastically less than workers on the Underground.”

Keeping up escalation, and coordinating with other groups of strikers, has the power to break the Tories and bosses.