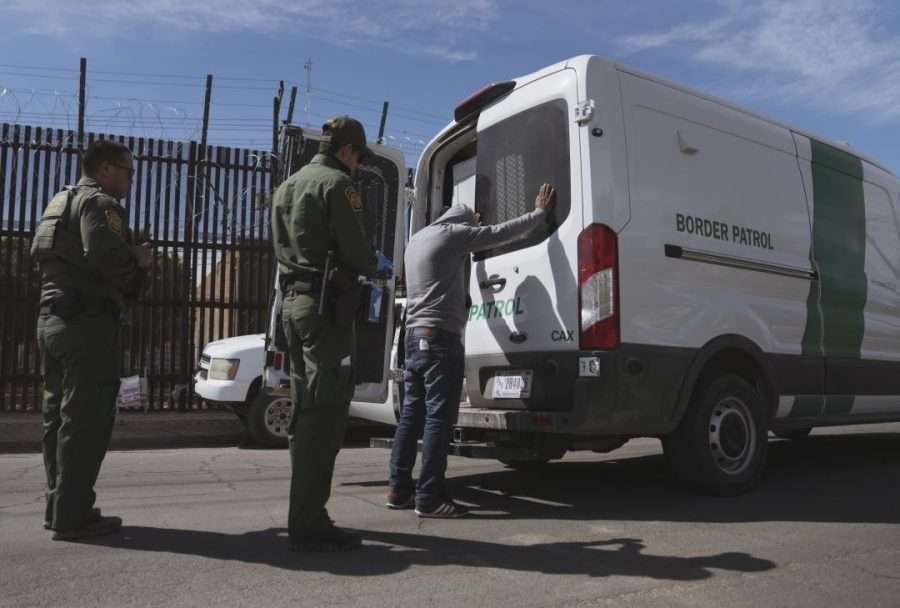 The astonishing roster of outrages perpetrated by the Department of Homeland Security in recent years — from ties to far-right groups to the wanton abuse of migrants’ human rights — leaves only one conclusion: it cannot continue to exist in its current form.

US Border Patrol agents apprehend a person that crossed the US and Mexico border fence in Calexico, California, on Thursday, April 8, 2021. (Eric Thayer / Bloomberg via Getty Images)

For those keeping an eye on it, the Department of Homeland Security (DHS) has had an exceptionally scandal-plagued few years.

There were the 2020 George Floyd protests, which saw DHS agents in unmarked vans snatch protesters off the streets, among other outrages. There were the various instances of the department spying on law-abiding dissidents. Then, this year, we got several reports outlining the way DHS has quietly amassed vast domestic surveillance capability by teaming up with the private sector, letting it bypass the usual need for a warrant, among other things.

To top it all off, its agents appear to have been actively complicit in an appalling stunt this year that saw Florida governor Ron DeSantis’s office trick asylum seekers into being flown to Martha’s Vineyard, in order to have them run afoul of legal requirements and be more easily deported. Oh, and we can add the department’s growing collaboration with tech firms for policing public discourse to that list.

If only it stopped there. Unfortunately, a spate of new reporting should deepen our concerns about the DHS and what it’s doing behind the scenes.

A leaked list of the membership of the far-right group the Oath Keepers spanning 2009–2015 was recently found by the watchdog POGO (the Project On Government Oversight) to contain more than three hundred current and former DHS employees, including seven people who work or once worked for the Secret Service. Members of the Oath Keepers, an armed group that views itself as building up for armed conflict with the US government, were involved in 2021’s Capitol riot and were flagged by the Secret Service in advance as one of the pro-Trump groups planning a “large-scale demonstration” on the day.

POGO’s report says that more than 90 percent of those listed are retired, but this is cold comfort. Besides the fact that this means potentially dozens of them are still working at agencies like Immigration and Customs Enforcement (ICE) and Customs and Border Protection, former undercover FBI agent Mike German told the organization that retired employees still speak to their former coworkers and could wind up sharing whatever they learn with extremist groups they’re involved in.

The group’s presence within the Secret Service should be especially concerning, since that agency was central to the January 6 controversy. Not only did it seemingly fail to act on the copious intelligence it collected about threats on the day, but it has been accused of trying to whisk then vice president Mike Pence away from the Capitol in the middle of the incident, before he could certify the election results. Secret Service employees later deleted their text messages on the day after the DHS inspector general’s (IG) office asked for them earlier this year.

So is the Oath Keeper presence in the Coast Guard, the most well-represented of the DHS’s various agencies on the list POGO obtained, with a whopping 184 names. As the report outlines, the Coast Guard is unique in being a branch of the military but exempt from the ban on military involvement in the domestic sphere. The fact that it takes part in domestic law enforcement as a result means its employees could have access to certain investigative information ― information they might pass on to groups they’re a part of or sympathetic to.

This is all on top of news this week that in late December 2020, a DHS intelligence analyst stumbled on online forum discussions about gathering at the Capitol on January 6 and even harming lawmakers and overthrowing the government, only for the tip-off to go nowhere. According to the Yahoo! News report based on a DHS IG report leaked to the outlet, the analyst’s more-than-daily “attempts to sound the alarm were shut down, delayed or flat-out rejected at every turn” within DHS. The fact that the bloated department was expressly created after the intelligence failure of September 11 makes this all the more damning.

If only this was all. A recent report produced by the Public Accountability Initiative (PIA) in concert with several other groups has laid bare the way that DHS’s ever-expanding mission and budget have, besides further inflaming the problems of overpolicing and government spying in the United States, become a sprawling corporate feeding trough.

The PIA report outlines the central role business influence has played in pushing forward the DHS’s and the broader “war on terror” since the very birth of the department in 2002. In a familiar cycle of corporate capture and profiteering, the report outlines, the firms best poised to make money off a government push for domestic surveillance seized on the September 11 attacks to help fuel public demand for this kind of domestic spying and have kept on lobbying and funding think tanks, advocacy groups, and other organizations to continue expansion of these efforts, netting them billions of dollars in government contracts over the years.

According to the report, corporate profiteers funded or created a panoply of advocacy groups that called for these policies ― like the International Association of Chiefs of Police (IACP), sponsored by a variety of tech firms, which in 2002 passed a resolution calling for DHS’s creation. Once set up, the DHS was inundated with thousands of proposals from software companies and other corporations, prompting one official to complain that “the sheer volume” meant “we don’t have enough staff to move as quickly.” Meanwhile, the number of firms lobbying on counterterrorism and homeland security ballooned by hundreds in little more than a year.

The IACP and other organizations funded and led by overlapping rosters of technology firms then spent the intervening years pushing for more counterterrorism funding, new surveillance and policing technologies, and the creation and expansion of fusion centers ― the dozens of centralized hubs for the collection, storage, and analysis of surveillance data that dot the country, and which have themselves fueled many of the worst aspects of the war on terror. The report points to research that determined the “Suspicious Activity Reporting” programs these fusion centers feed were disproportionately made up of unfounded reports of Muslims and Arabs, and to a 2012 Senate investigation that concluded the centers are “endangering citizens’ civil liberties” while doing little to actually stop terrorism.

George W. Bush’s 2002 creation of a Homeland Security Advisory Council (HSAC) ― staffed by executives, consultants, and law enforcement officials ― exacerbated this, with the HSAC playing a key role in the creation of fusion centers, according to the report. So did the classic Washington revolving door that saw executives of these firms stroll into homeland security positions and vice versa, like Microsoft’s former chief security strategist Howard Schmidt, who became vice chair of the Critical Infrastructure Protection Board that advocated for a corporate role in US cybersecurity initiatives (with Microsoft, of course, on hand to help out).

“Without corporations, there is no Department of Homeland Security,” the report states.

Like Microsoft, many of these firms are household names, including Motorola and IBM. Two in particular stick out: LexisNexis and Thomson Reuters, data brokers who hoover up and sell vast quantities of Americans’ personal data, whether from Department of Motor Vehicles (DMV) records, utilities, or health care providers, which they then sell to those who can pay for it, like advertisers. Recent research revealed that both are “the two primary data brokers that sell ICE access to driver information” and other data on law-abiding Americans to help the agencies track down and arrest undocumented immigrants, leading the researchers to conclude the DHS agency “now operates as a domestic surveillance agency.”

Taken together, the recent reporting paints a picture of the DHS that should alarm almost everyone: whether conservatives who don’t want government bureaucrats snooping through their private business, liberals who fear for the survival of US democracy, or leftists concerned about the repression of marginalized groups.

Despite access to vast databases about the lives and behavior of law-abiding Americans and despite a more-than-$80-billion budget and more than 240,000 employees, DHS failed to do the one thing it was expressly created for and allowed the January 6 episode to take place, an incident that could have led to tragedy. Worse, it appears to have been infiltrated by the very kinds of extremists it ostensibly exists to stop. But it has at least been good for one group: the corporate sector, which has used the department and the bottomless pit of federal dollars nominally devoted to countering terrorism to make a lot of money themselves.

While some of its components serve important functions required by any modern state, it’s high time we talked about restructuring the department, including scaling back its surveillance powers and shrinking or breaking it up. Continuing down the current path only raises the danger that it will be hijacked by fringe elements and makes it ripe for abuse by a future authoritarian leader.