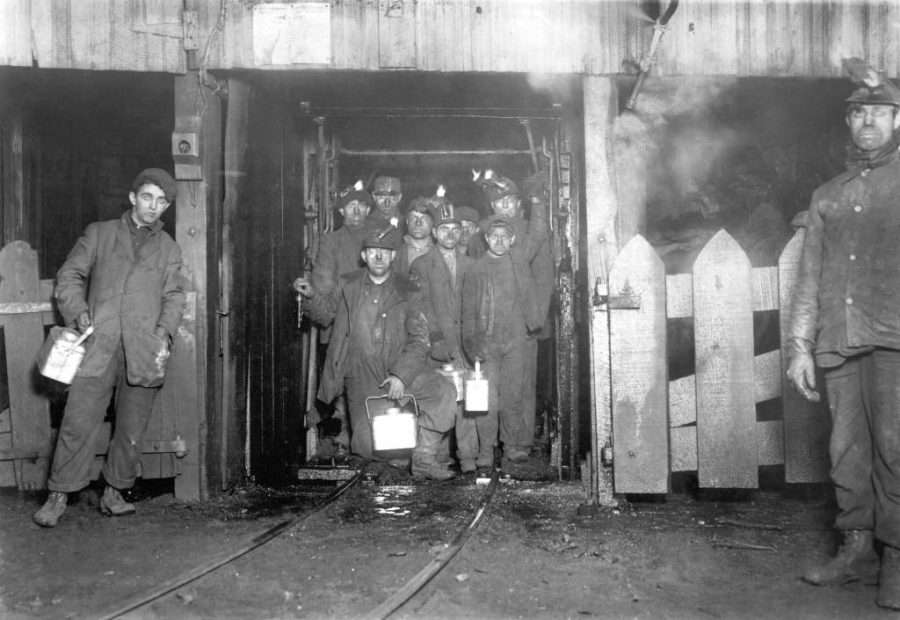 As statues of tyrants and reactionaries come down, organizers in West Virginia are building monuments to the coal miners whose resistance to corporate domination a century ago has largely been forgotten.

A group of coal miners at the end of their workday, January 1911. (Photo by: GHI / Universal Images Group via Getty Images)

It was a late winter’s day at a union hall in Clothier, West Virginia, and a resident named Marty had a pointed question for the organizers of that day’s community meeting.

The organizers were representatives from the West Virginia Mine Wars Museum, located in nearby Matewan and supported by the United Mine Workers of America. Founded eight years ago, the museum is dedicated to telling the story of the state’s Mine Wars — a struggle spanning the early part of the twentieth century that pitted a multiracial, multiethnic group of miners against coal companies in a violent fight for union rights and better working conditions. The Mine Wars culminated in 1920 at the Blair Mountain, where the largest labor uprising in American history was ultimately defeated by the US Army.

Last January, the Mine Wars Museum received a $100,000 grant from Monument Lab, a Philadelphia-based public history and art nonprofit, to support a project called “Courage in the Hollers: Mapping the Miners’ Struggle for a Union.” The aim of the project was to commemorate the Battle of Blair Mountain not just at the site of the battle, which already has a monument, but along the miners’ route to the mountain. The project’s organizers sought input from residents of the two small towns where they wanted to build: Marmet, the starting point of the march, and Clothier, the end point. That’s how they came face-to-face with Marty, whose question was simple enough.

“He just raised his hand, and he was like, ‘What do a bunch of people in Philly — why do they care about this?’” recalled Shaun Slifer, the creative director at the Mine Wars Museum. “‘Just straight up: tell me why you’re here, why they care, and why they would put that much money into this.’”

The question struck at the belief animating the Mine Wars Museum’s and Monument Lab’s undertaking: that the history of the Mine Wars remains directly relevant to the lives of West Virginians and Americans, and that representing that history thoroughly and accurately has transformational potential.

There is perhaps no better endorsement of that position than the extent to which the authorities in West Virginia have gone to suppress the story of what happened a century ago. Mackenzie New Walker, executive director of the Mine Wars Museum and the daughter and granddaughter of coal miners, said that the memory of the Mine Wars has remained strong for generations in private spaces — on back porches and around kitchen tables — but not in classrooms or public discussions. The official history shines a spotlight on coal miners’ struggles, but not their resistance.

Retired coal miners and members of the United Mine Workers of America stand in front of the Mine Wars Museum on August 28, 2022 in Matewan, West Virginia. (Robert Nickelsberg / Getty Images)

Talk of the Mine Wars was somewhat hushed in private spaces, too, especially after miners were put on trial for treason following the Battle of Blair Mountain. As a result of the chilling effect, generations of West Virginians have lost all but the broad strokes, while outside West Virginia, the history remains largely unknown. Slifer, who grew up in Nebraska, said that he only learned about the Mine Wars as an adult when he randomly picked the John Sayles movie Matewan off the shelf at his neighborhood DVD store.

“It [was] multiracial, multiethnic organizing,” Slifer said of the depiction he saw in the film, which in this respect was true to life. “That collectivism is in and of itself the thing that was actually the most dangerous part of the story to the powers that be. So there are a lot of heroes that you don’t learn about, but I think the concept of it is what was being erased.”

That type of erasure is not uncommon. Last year, Monument Lab released the findings of its fourteen-month audit of some fifty thousand conventional monuments across the country. It found that the country’s monuments overwhelmingly venerate white men, soldiers, and violence. There has been a reckoning in recent years in parts of the monument landscape, particularly around the Civil War and the civil rights era, but the labor movement has largely been left behind.

“It’s not memory or history for the sake of history,” said Thomas Adams, senior research advisor at Monument Lab, of the memorialization process. “It’s the extent to which if there is enough volume of that, there’s a backdrop for people to place themselves in contemporary times.” In other words, being surrounded by stories of resistance to injustice helps people envision their own participation in modern movement struggles.

That possibility feels acutely important in West Virginia, which today is one of the poorest states in the country. Its life expectancy of just 72.8 years is the second-worst in the country, and its rate of drug overdose deaths is by some distance the highest. Appalachia as a whole is home to some of the country’s worst wealth inequality and environmental extraction, issues that have persisted since the miners marched on Mingo County in 1921.

There are a number of other connections to make from the Mine Wars to the state’s current political and environmental conditions. One of the most fundamental, then as now, remains who controls the land. In 1974, a reporter for the Huntington Herald-Dispatch found that in nearly half the state’s counties, half of the land was owned by out-of-state corporate interests. Likewise, the report found that two-thirds of all the privately held land in the state was controlled by absentee landlords. It was in that era that activists began referring to Appalachia as a resource colony. Appalachian scholar David Walls termed it a “sacrifice zone,” a region plundered by megacorporations with the approval of the state.

West Virginia’s patterns of land ownership and wealth extraction have changed somewhat since the 1970s, but the major themes are consistent. In the five counties in the state’s southern coalfields, a handful of corporations control more than half the privately owned land. There is perhaps no clearer illustration of the paradigm than Blair Mountain itself, the majority of which is still owned by coal companies that have been unwilling to sell.

“If you asked somebody at Giovanni’s, ‘Do you live in a colony?’ they’d be like, ‘What the fuck are you talking about?’ But I do think people are wondering, where has the wealth gone?” Walker said. “Everyone sees the trains leave . . . we had the most abundant natural resources anywhere in the country, and we’re the poorest.  We’ve got the poorest counties. And I think we can point back to the Mine Wars when all the land was bought up.”

The Mine Wars Museum is not shy about making connections between the past and present. Three years ago, the museum played host to a gathering of the nascent political party West Virginia Can’t Wait — an anti-corporate, progressive party attempting to establish itself as an alternative to the state’s corporate-captured Democratic Party. The new party, which now has elected twenty-four officials across the state, has explicitly linked itself to the legacy of the workers who fought against corporate behemoths a hundred years ago.

When West Virginia teachers launched a wildcat strike for better wages and working conditions in 2018, many wore red shirts and red bandanas — an homage to the miners who tied red bandanas around their necks to identify themselves as supporters of unionization during the Mine Wars. That strike, which involved nearly twenty thousand teachers and shut down schools in all fifty-five West Virginia counties, was the beginning of a wave of teachers’ strikes and a forerunner of the surge in labor organizing in several industries since the outbreak of the COVID-19 pandemic.

The teachers’ strike was a testament to the ongoing power of the memory of West Virginia’s labor past. So was the response the Courage in the Hollars organizers got when they began holding community events about the project, which Slifer said brought up a “flood of feeling” from people who are not “accustomed to somebody showing up and asking them what they thought.”

“As much as it’s a public memory and public history project, it was also a sense of rebuilding community bonds — regenerating conversations about Appalachians’ working class history,” Walker said.

Sue Mobley, director of Research at Monument Lab, said that the organizers’ deep outreach was key to the entire project’s success. “The amount of groundwork that was laid by the time they applied,” she said. “The amount of time they had spent in conversation, the fact that they could build on all the work that had gone into the [Battle of Blair Mountain] centennial, and then have just dozens of meetings to get to the point where this was cocreated with current labor leaders, with groups in each of the towns — that’s the work.”

The project leaders and community members ultimately settled on building a statue of Mother Jones in Marmet, accompanied by silhouettes of red-necked miners who participated in the march picking up weapons in preparation. The Clothier monument includes silhouettes of five members of the march. Both monuments were unveiled over Labor Day weekend in celebratory events.