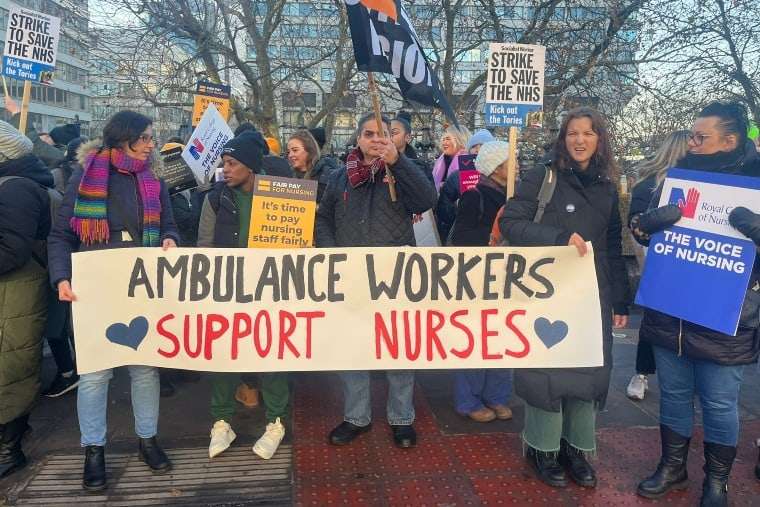 Nurses’ strikes this week hit the floundering Tories hard. Now they face a second round as ambulance workers in England and Wales prepare to walk out too.

More than 1,600 workers in the Unite union at three trusts in England are scheduled to strike on 21 December.

The combined weight of the three unions acting together will decimate ambulances services across Britain—and highlight both pay and the dire NHS crisis.

The Tories and the right will doubtless accuse strikers of risking lives. But any ambulance worker could tell them that lives are at risk every single day because the service is at breaking point. Stories of elderly fallers waiting for more than 12 hours for an ambulance are commonplace. And so are desperately long waits for people with category two emergencies—including those having heart attacks and strokes.

The government is readying 750 troops to scab. And it is also bringing in other forces to strike-break.

In August, the NHS started a £30 million four-year contract with St John Ambulance to provide “surge capacity” to ten ambulance trusts and act as an official auxiliary service for England. A recently leaked government document shows a plan to “build on the approach recently agreed with St John Ambulance” during strikes. No trade unionist should agree to work alongside soldiers or other strikebreakers.

Unions must not give an inch to any blackmail. The Tories’ austerity policies created this crisis, and they are solely to blame for anyone suffering.

Unions must stand by their demand for a rise that meets inflation as a minimum. Only a substantial increase can stave off the flood of people leaving the service and enable trusts to recruit new staff.

The action announced by unions has a complex timetable:

Activists should try to find out precise details of next week’s walkouts by visiting ambulance stations in advance of the strikes. And union leaders must call for widespread solidarity with all the NHS actions.