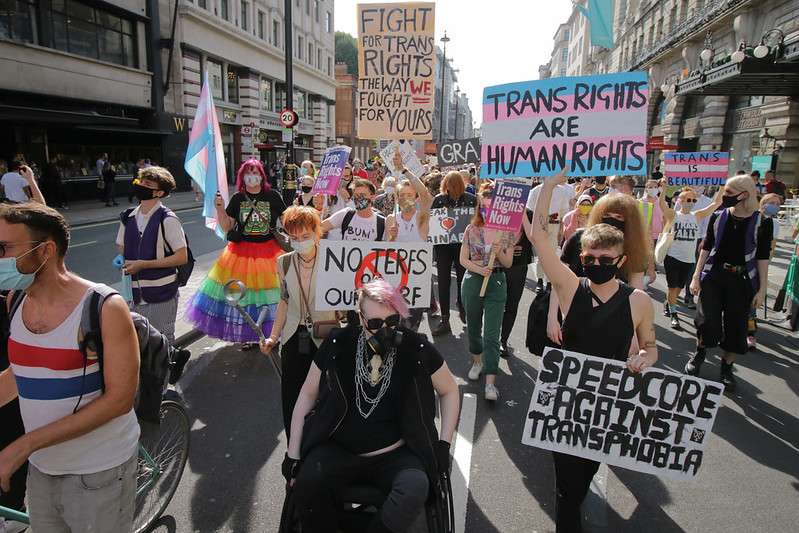 On the evening of Wed 14th December, a combination of protest and direct action stopped the screening of the transphobic film, Adult Human Female at the University of Edinburgh.  Staff and students, united in solidarity, did what the University itself should have done.

Adult Human Female is freely available online.  However, Edinburgh Academics for Academic Freedom (EAFAF) decided it should be screened on campus. There had been various conflicts around anti-trans events on campus before, involving some of the same people, so this film screening wasn’t a one-off event. We had to decide between not giving them the oxygen of publicity and not allowing them to intimidate trans members of our community. The local branch of UCU, the Staff Pride Network, Pride Soc, Edinburgh University Students Association and many staff and students objected to this happening on campus.

EAFAF class themselves as the Edinburgh branch of Academics for Academic Freedom, a right-wing bunch of free speech absolutists. They have no official status within the University of Edinburgh, yet they are allowed a blog with University branding on it.

UCU Edinburgh has specific policy on this.  In response to a small but very vocal number of people who wanted union cover for their transphobia, we passed a motion at our AGM in June 2019 on Trans and Non-Binary Equality at the University of Edinburgh, which included the clause:

Call on the University of Edinburgh (UoE) to ensure that all events held in the name of UoE and on UoE premises are in line with the Dignity and Respect Policy and that the UoE neither host nor facilitate meetings which contain content which is transphobic, biphobic, homophobic or otherwise detrimental to the safety and wellbeing of LGBT+ staff.

On that basis, we wrote to the Principal demanding that they withdraw support for the screening, specifically in relation to providing the venue. They declined. Many others did likewise, to a similar response.  In fact the responses were virtually identical, with no engagement with the specific concerns being raised.

We were very public about what we were doing, and the abuse our UCU branch and members got went off the scale. Most despicably, our BAME Officer was subject to a torrent of racist abuse, some of it very graphic. Still, we held the line. The University having failed in its duty of care to staff and students, it was down to staff and students to respond, so we did.

Pride Soc (the LGBT+ student society) and the Student’s Association organised counter events. Pride Soc set up a stall outside the venue as focus for leafleting and around which others gathered in a bigger show of solidarity. Its purpose was to counter the anti-trans propaganda, not to prevent access. Pride Soc issued a statement saying:

The film contains transphobic language and spreads misinformation about trans* people, all under the narrative of protecting ‘women, children and biological reality’. The University of Edinburgh should be an environment where every individual, student or staff member can feel safe and appreciated. The allowance of this screening to happen has nothing to do with a freedom of speech, as it endangers trans* people on campus and beyond, erasing their identities and encouraging the spread of hateful portrayals. Therefore, we support the call of the UCU to cancel this film screening. Furthermore, we will collaborate with LGBTQ+ societies and feminist societies of the university to host a stall outside the film venue to show solidarity to the trans* community. We will provide non-harmful information about the lived realities of trans* people and how to support them, taking a stance against hate and misinformation, as well as the university’s neglect of their trans* student and staff population.

UCU members joined other staff, students and other supporters and rs21 members were in attendance, our Trans Liberation stickers being very popular.

Recognising that not everybody felt safe protesting, the Student Association hosted a Trans Community Solidarity Event.  This was ‘a trans solidarity space, in partnership with the Staff Pride Network, where trans students and allies can come together, celebrate and show their support for the trans community we have at the University of Edinburgh.’ It was also where many of the protestors went afterwards.

Outside the screening venue, it soon became apparent that something was going on after those organising/attending the screening seemed to be milling around the entrance for an extended period. News eventually reached us that a group of people had occupied the lecture theatre, preventing the screening going ahead. Shortly after, the screening people left and the occupiers were given a rousing cheer from those of us gathered outside.  However, this was not the end. The University had a Plan B and a backup venue. Again, access to this venue was disrupted and the event eventually cancelled.

The vitriol that then descended on Twitter was voluminous as protestors recounted and celebrated our victory. Much came from anonymous accounts but alongside the usual suspects from the transphobic ‘Gender Critics’ was identifiable support for them from voices on the right and far right.

As well as opposing transphobia in its own right, it must be opposed as a pipeline to other forms of bigotry, reaction and even fascism. This can be seen in the ableist response (such as this comment and others in the same thread) Greta Thunberg received for sending solidarity to the protest and in the racism mentioned earlier.

Those on the left who see fighting transphobia as low priority or irrelevant to class struggle miss the point. Capitalism is riddled with reaction (and worse) and the working class is not immune from this.  As socialists, we don’t win workers away from reactionary views by pandering to them, we win them by articulating the alternative.