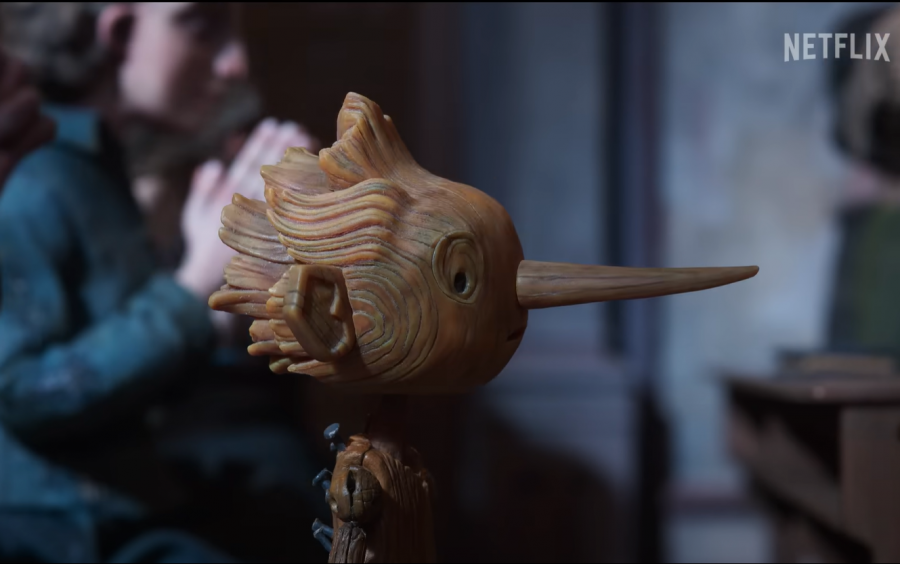 Guillermo del Toro’s Pinocchio is handsome and well-crafted. But the film’s intertwining of traditional Catholicism, Fascism, and dysfunctional families with gooey sentimentality makes a stew of ingredients that don’t go well together.

It’s hard to convey how disappointed I am in Guillermo del Toro’s Pinocchio, currently streaming on Netflix. I had high hopes for it. I like stop-motion animated film in general, and this promised to be such an inventive one, especially welcome in these times of rote animated films. But I must confess that I disliked it intensely.

It’s a handsome, elaborate, well-crafted production overall, the result of tremendously intensive labor, as is typical of stop-motion animated films, and there are awesome effects such as the plunges into the sea when the protagonists are trying to escape the huge Terrible Dogfish that is trying to swallow them whole. The distractingly starry cast of voice actors includes Cate Blanchett, Tilda Swinton, Christoph Waltz, and Ewan McGregor, and, in smaller roles, Ron Perlman, Finn Wolfhard, John Turturro, Tim Blake Nelson, Burn Gorman, and Tom Kenny (the voice of SpongeBob SquarePants). It indicates del Toro’s prestige and the high level of production value in the film in general.

But the overall effect is so plot-congested, lugubrious, morbid, and off-putting that it took me three tries just to watch it all the way through.

One problem was that I couldn’t get used to the appearance of the human characters, who occupy a discomfiting place in the uncanny valley, with their hard, painted Plasticine faces and unfocused, gelid-looking eyes. Only the puppet Pinocchio looks great, with his rich wood grain, his knotty features, and his craggy bark hair, his literal stick-thinness augmented by the leafy-twiggy projection of his nose when he lies.

A bigger problem for me is that I read about the project in advance, and so I was expecting something quite different. The directors, del Toro and Mark Gustafson, had emphasized their return to the source material that’s been a lifetime favorite of del Toro’s: Carlo Collodi’s remarkably stark, episodic, cautionary fairy tale of 1883, The Adventures of Pinocchio. Not much at all like the beloved Disney film version from 1940, Collodi’s Pinocchio is about a troublesome wooden marionette who creates havoc for his “father” Geppetto, kills the Talking Cricket who advises him to become a good, studious, hardworking “son,” gets waylaid by con artists in his pursuit of selfish pleasure, and winds up hanged from a tree for his innumerable sins. (When the stories proved popular, Collodi continued the adventures, finding more conventional ways to save Pinocchio from his worst impulses.)

On top of all that old-time fairy-tale savagery, del Toro announced his intention of setting his film in the grim interlude between World War I and World War II, amid the rise of Fascism in Italy. My mind was boggled at the very idea that someone would dare to plunge that far into darkness in a form generally reserved for family entertainment. How would del Toro handle such brutal material?

He makes a sickening stew of ingredients that don’t go well together. Some harsh Collodi elements, plus del Toro’s own preoccupation with the cruel intertwining of traditional Catholicism, Fascism, and dysfunctional family structures, are put in queasy-making combination with gooey sentimentality that even Walt Disney at his sappiest might’ve considered excessive. For example, the film begins by celebrating the perfect love between the wood-carver Geppetto (David Bradley) and his impossibly angelic son, Carlo (Gregory Mann, who also voices Pinocchio), with Geppetto singing the first of the film’s several terrible songs, all about how his son means absolutely everything to him, clearly foreshadowing the kid’s imminent death.

It’s odd that a dead son is the emotional springboard for the creation of Geppetto’s puppet son in both this film and in Robert Zemeckis’s dreadful live-action-plus-bad-CGI remake of Pinocchio that came out in September this year. That plot element isn’t in the stripped-down Collodi narrative. Instead, Geppetto is merely an irascible, penniless man carving a marionette out of a hunk of mysteriously animated wood because he hopes to travel around giving puppet shows as a means of earning a living.

Anyway, in the del Toro version, Carlo is killed in a madness-of-war bombing raid that destroys the Catholic church in town. It happens right after Carlo helps Geppetto paint extra blood on the wooden face of Jesus Christ on the cross. Later, the suffering puppet Pinocchio will wonder why people love Jesus but not him, since they’re both made of wood. It’s that kind of a film.

Geppetto’s twenty years of fixated grief over the death of the saintly Carlo inspires the blue Wood Sprite (Tilda Swinton) to give life to a wooden boy named Pinocchio, intended to be Geppetto’s new son and restore his sense of joy. It doesn’t work, because Pinocchio is wild in a typical kid-like way, though nowhere near as rampaging as Collodi’s puppet. He doesn’t kill his Talking Cricket adviser, for example, as Collodi’s puppet boy does, thus demonstrating, as Collodi puts it, “that bad children do not like to be corrected by those who know more than they do.”

The cricket isn’t Jiminy Cricket here, but a self-serious blue bug named Sebastian J. Cricket (Ewan McGregor) who’s writing his highly literary memoir and narrating the tale as well as supposedly acting as comic relief. No relief is forthcoming, however.

“You’re such a burden,” Geppetto rails at the misbehaving Pinocchio. This makes Pinocchio run away with Count Volpe (Christoph Waltz) and his marionette show. Volpe is a fan of new dictator Benito Mussolini and shares his flamboyantly tyrannical qualities, relentlessly torturing his monkey assistant named Spazzatura (Cate Blanchett). Though Pinocchio becomes a star attraction in Volpe’s traveling show, he gets embroiled in ever more dangerous encounters, including one with Il Duce himself, before he’s finally reunited with a repentant Geppetto.

There’s a ton more plot than that, including Pinocchio’s multiple deaths on his way to becoming a real boy, i.e., an inhumanly virtuous creature as impossible as the late lamented Carlo was. Death (also Tilda Swinton), a chimera who’s the sister of the Wood Sprite, greets Pinocchio in the underworld each time he dies. There he spends a limited amount of time before returning to life to try, try again. Oddly enough, Pinocchio doesn’t also undergo the several fantastical transformations he endures in Collodi’s work, which indicate the extreme changes necessary to achieve a virtuous character. The one in which Pinocchio is turned into a donkey along with the other pleasure-seeking boys who are tricked into being sent to work in the salt mines is a trauma that the Disney animated version does very well, for example.

But in a weird denouement of death, we follow the main sympathetic characters through the aging process in order to witness the demise of each one. We see everybody die except the possibly immortal Pinocchio. Then he heads off on his new adventures.

All that being noted, it’s a film with a sensibility that so clashes with my own that I’m helpless to advise interested viewers. Go ahead and watch it — it may be just the thing for you! There’s no other movie like it, that’s for sure.