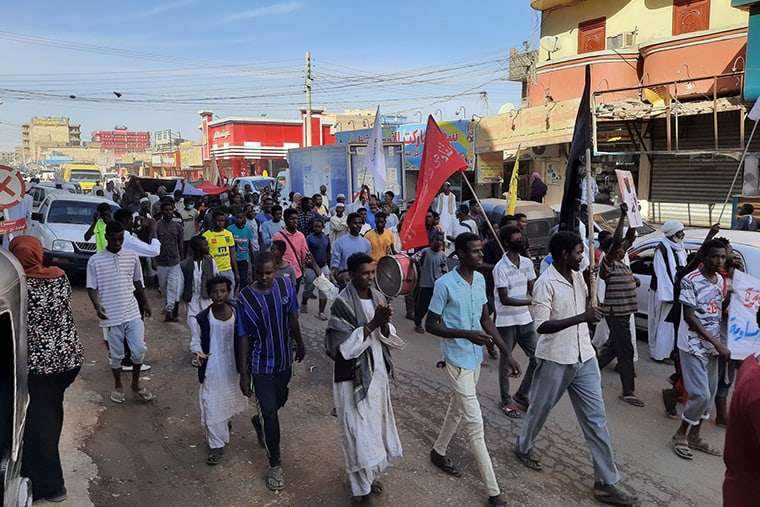 Marching in the city of Atbara

Demonstrators poured on to the streets across Sudan on Monday on the fourth anniversary of the start of the revolt that brought down dictator Omar al-Bashir. They were also rejecting a fake deal pushed by liberals and imperialists to end resistance to the military regime.

The protests were the largest for several months and show the resilience of the opposition. Cops and soldiers met protests in the capital Khartoum and the adjoining city of Omdurman with stun grenades and tear gas.

But they couldn’t stop protesters marching, and angry demonstrations reached close to the presidential palace. There police with armoured trucks blocked their way, then chased them through the streets. Other protests took place in Port Sudan, Atbara, Gedarif, North and South Kordofan and many other areas.

The movement faces major challenges. The army and a section of the opposition led by the Forces for Freedom and Change-Central Council agreed an outline deal on 5 December. It claims to install a civilian government and organise elections within two years.

But regime head Abdel Fattah al‑Burhan has already made clear what’s really happening. In a speech to troops at the Al-Maaquil military base in the north of the country, al-Burhan reiterated he wouldn’t accept anything that might restrain the military establishment.

“Do not listen to what politicians say about military reform. No one is to interfere in the affairs of the army at all,” al-Burhan told his troops according to a video released by the official news agency Suna.

He added, “People are hearing that there is a settlement. There is no settlement, but there is an agreement that includes points that we, the military, are convinced of. Therefore, we have approved it and we will support it until it becomes a reality,” he stressed.

This obviously false deal will mean the generals retain their vast economic power, and ordinary people are excluded from any real democratic decision-making. In addition, there will be no accountability for the military. This includes the massacre of at least 186 people on 3 June 2019 and the over 120 people killed this year.

The deal is the result of a process headed by the United Nations and with the support of Britain, the US and Saudi Arabia.

Demonstrators on Monday rejected this settlement on the streets. The coordination of grassroots resistance committees in Khartoum State said, “The rebels of our country continue our struggle to overthrow the army and do not bend our resolve in that. We are united in no negotiation, no partnership, and no bargaining with the killers.

“We remember it was a hard and long journey until we ended it with the fall of Al-Bashir, and we have the same hope, determination and persistence until the overthrow of the generals. One day we will say no power other than the power of the people.”

The 19 December is the anniversary of the revolt against Bashir—and the date in 1955 when the Sudanese parliament declared independence from Britain.

The movement toppled Bashir in 2019 after mass demonstrations, strikes and sit-ins. But it was then faced with the reality that the dictator had gone, but the generals and businessmen who backed him remained. Three and half years of struggle against the military has followed.

The resistance was so strong that in August 2019 the military did a deal with sections of the opposition to share power and then move to civilian control. Entirely predictably, instead of stepping aside, the military headed by Abdel Fattah al‑Burhan launched a coup in October 2021.

This led to another phase of brave street protests. The generals can’t crush the resistance, but the resistance has not broken the coup regime.

The 5 December deal shows the resistance has to break completely from any reliance on the “international community” or those who want compromises with the military. The anti-coup forces have to become more militant and to pose an alternative centre of power to al-Burhan and the generals.

Widespread strikes, linked to the mass demonstrations, can be the way for the resistance committees to take control into their own hands.

The liberal anti-coup groups, such as the Forces for Freedom and Change, cannot offer a way forward. They seek to constrain the resistance within the confines of mainstream methods and elite agreements.

December 2018: A trebling in the price of bread and other basic goods leads to protests. They quickly became a political revolt against the regime of Omar al-Bashir who had ruled for 30 years since a military coup. Despite the repression, protests grow during the next three months.

April 2019: Instead of leaving at the end of a march in Khartoum, protesters occupied the area around the military headquarters and began an indefinite sit-in. They set up barricades to protect themselves from attack, organised food, water and security, began cultural projects and held constant discussions. The example spread to some other cities. And workers began to protest not just as individuals, but as organised groups from workplaces.

11 April 2019: Fearing the scale of the protests, the military leaders announce that Bashir has been removed. But the military stay in charge. The protests and sit-ins continue and on 28 and 29 May workers hold a powerful general strike.

August 2019: Instead of building on the protests to sweep away the military, a rotten agreement sees “power-sharing” between the military and the pro-democracy movement.

October 2019: Huge numbers of people come onto the streets angry at the slow pace of change and economic hardship.

July 2020: Up to a million people march “to correct the path of the revolution”.

October 2021: The transitional agreement says the military should step aside, but they launch a coup to stay in power. It’s met by immediate street protests.

6 Nov 2021: A million people demonstrate across Sudan against the military. They block roads and make clear they will not accept military control.

21 Nov 2021: Abdalla Hamdok, the ousted civilian prime minister, does a deal with general Abdel Fattah al-Burhan to lead a government of technocrats for a transitional period. Most of the anti-coup opposition denounce the move as a sham designed to give the appearance of change while the military effectively stays in charge.

2 January 2022: Continuing mass street protests force Hamdok’s resignation. The United Nations and Western powers continue to seek a compromise between the people on the streets and the generals.